Final-ly, girl? What could have been a fitting psychological finale, can't stab the landing...

Corey Cunningham is plagued by his accidental role in the death of a child and Haddonfield, a town with its own tragic, history is not the kind of community that forgives easily. Laurie Strode recognises Corey as a fellow outlier, scarred by tragedy and does her best to help.  But Corey’s trauma is deeper than most realise and he’s about to encounter something in the city’s underbelly that will give him renewed strength to face his oppressors.

Michael Myers has been doing his best to reduce real-estate values around the community of Haddonfield since John Carpenter’s superior slasher flick Halloween appeared in 1978. Over the years there’s been a string of sequels, most of them inferior to the original and the infamous Halloween III: Season of the Witch (1982) not even featuring Myers as a threat. Rob Zombie tried to revive it all in a 2007 and 2009 reboot that ignored the original movies but they didn’t produce further chapters. A decade later in 2018, director David Gordon Green decided to create a story set in a contemporary Haddonfield and explore how the original’s survivor Laurie Strode (Jamie Lee Curtis) had coped with her life since and how she faced the return of her ‘boogeyman’.

In what might have been a suitable franchise ending, we had the generational might of three Strode women taking on the long shadow of Michael Myers and, uniting as one force, seem to burn that legacy to the ground. If it had ended there, there would have been a solid argument that the horror franchise had come full circle and the archetypal ‘final girl’ Laurie Strode had overseen it all and had triumphed.But endings are difficult to pull off… and even if they’re successful, the Powers-That-Be usually then want to find some loophole to keep it going.

Green announced his intention to make this modern take a full trilogy, though the immediate follow-up, Halloween Kills in 2021, was more of a mixed bag, killing off some major players and generally received ho-hum reviews.  That didn’t stop the intention and then actual production of the ‘last’ in the trilogy and supposedly the franchise entire: Halloween Ends. This new trilogy of stories tried to boast a modern take on the horror classic. There’s been furrowed brows and stroking of chins as issues such as female empowerment, mob rule, the power of the media and the dangers of legacy have supposedly been at the forefront of the film-makers minds and there’s some truth that such elements have permeated in the telling…

There’s a good – okay, half-decent – film buried in this so-called ‘final’ Halloween entry but though there’s plenty of ‘kills‘ it’s an uneven tale that simply doesn’t have the courage of its varied convictions. For a start, for a franchise built on the fear of an inside-out William Shatner mask, it takes a good third of the movie for Myers himself to even appear and then a background entity, essentially a walk (or stagger)-on part in his own movie.  Instead, the spotlight goes to a new character, Corey Cunningham (Rohan Campbell).

In a flashback to 2019, Corey is baby-sitting a brattish youngster called Jeremy who proceeds to torment his sitter with a forced game of hide-and-seek. In a freak accident, Jeremy is killed and though ultimately found innocent, Corey’s reputation around Haddonfield, now unforgiving in its nature towards child-killers of any kind, is forever tarnished. He’s the target of pointing fingers and worse and in one incident it’s Laurie Strode (an outsider herself) who steps in and saves him from a beating by the kind of entitled, thuggish teenagers that so often form the collateral damage of such movies but sadly do sometimes exist in real life as well.

Watching the film unfold there’s the feeling that we’re watching an evolution – or more likely devolution – of a new killer. Though our sympathies are initially with Corey, especially as he starts to stand up for himself and begins a relationship with Laurie’s daughter Allyson (Andi Matichak), it’s clear that he’s not becoming any better adjusted.  Corey feels that outlier status at every turn. After a savage beating by the same teenagers, he ultimately seems to encounter a broken Michael Myers who is inexplicably hiding out in the sewer system and instead of being slaughtered himself, Corey evokes not exactly sympathy but some kinship in the aged monster.

It’s at this point where weathered viewers might just get an inkling that there could be (or hope there is) more going on and I make no apologies for thinking that what then transpires might largely be in Corey’s mind. Some of his deadly reactions and acts of revenge that begin to happen are clearly at his own hand, but as Myers seems to follow Corey and ‘protect’ him, there’s the feeling that we might be involved in a case of ‘unreliable narration’. Perhaps, you think, a subsequent revelation may be on the cards, that Myers himself is long gone but the power of his legend has now corrupted Corey. As we see Laurie become less and less comfortable with Corey’s demeanour, there’s a talk about ‘legacy’ between Laurie and Corey as they sit opposite each other… but the way it’s set-up the audience could easily suspect it’s not real – so is any of the story? (After all, Corey has slipped from protagonist to antagonist, wearing his own Haloween mask and stalking his victims and is clearly not of sound mind). Equally,  Allyson’s bond with Cory is problematic:  at first feeling empathy for his outlier status and then finding that both of them have suffered in some ways from the aftermath of the Laurie/Michael battle through the decades. It’s not a very subtle story, but if the film is genuinely talking about being the last ‘Halloween‘, the idea that its emotional fallout and examination of PTSD might  actually ignite another killer in Myers’ stead seems entirely possible in and of the moment. We might even be heading for a surreal UNnatural Born Killers…

Sadly, that’s a case of massively over-thinking and over-hoping. The film wastes all that psychological-twist potential by simply having Corey be a generic victim-turned-monster and that’s it for 3/4 of the film. Instead of finishing Halloween on some pseudo-social-aware high, it reduces the original Halloween factor to little more than opportunistic October-night window decoration. Ten minutes before the end, it kills off the now unrelatable Corey and it then remembers that Michael Myers should be a real player in proceedings. Laurie, seemingly on the verge of suicide (though the trailer’s line about both Laurie and Michael having to die to end it is notably absent) lures Michael into the home and there’s a brief kitchen fight where Laurie takes on the spectre who has haunted her all these years, tears off his mask and with a few moments of kinetic kitchenette slashable warfare, then pretty easily defeats her nemesis and crucifies him to the kitchen table with kitchen knives. Result!

If Halloween Kills was marketed as a slasher flick with social aspirations… an observation and lamentation on how mobs can be formed by misinformation and driven by anger, then Halloween Ends throws all of that conceit out the window in its final moments as the whole of Haddonfield comes out to carry the crucified figure of Michael through the streets, celebrating the killing of Myers by no less than grinding his bones into oblivion. In franchise-fashion, it’s almost a literal drive-in drilling. Movie monsters have arguably come back from more, but it seems pretty final. Mob 1: Monster 0.

Few horror movies really know how to pull off the balance of chills, spills and audience-friendly chaos but it’s a shame that the ‘big daddy’ from which many take their cues, gets close to going out in style and then can’t quite muster anything new to say as it shuffles off… this time Halloween doesn’t kill it just sends trigger warnings. 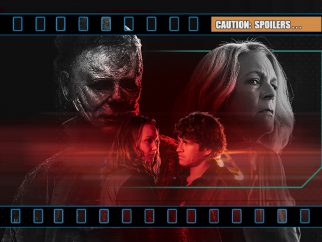