It’s 1934 and Ben has Leaped into the body of Father James Davenport, a priest summoned to a imposing, fog-shrouded streethouse on Hallowe’en. It seems that the young Daisy Grey, who has recently passed her eighteenth birthday, has been possessed and her family want her to receive an exorcism. Addison tells Ben that current history recalls that Daisy died later that night, but before Addison can impart more details, a strange malfunction severs the connection between leaper and hologram.

As the Project struggles in vain to reconnect, Ben finds himself caught between his scientific beliefs and the role of the man he’s Leaped into… and though Ben initially refuses to believe in actual ‘possession’, is such a thing truly impossible to rule out when he himself is inhabiting someone else’s body?

The original Quantum Leap had a number of high-concept episodes, including some suitable Hallowe’en entries.  One in particular was The Boogieman with Sam stuck inside a potentially haunted house and seemingly tormented by the Devil himself (and as the series postulated – and in the modern series chief tech Ian Wright repeats – if Sam Beckett thought God might be Leaping him around, is it such a profound leap that the Devil himself joins in?). In many ways O Ye of Little Faith – the seventh episode of the new run – feels like a doff of the hat or dog collar to a similar idea. At least to begin with…

All the de regeur Exorcist elements are on show here, hokey and otherwise. For most of the episode genuine demonic aspects are certainly the implication with the shadowy figures, smoke monsters, moving wallpaper and bloody deaths – all rendered in more convincing CGI than the older chapters – and certainly lending itself to non-scientific conclusions. But, of course, this is Quantum Leap not Supernatural and fully-fledged phantoms in and of their incorporeal wouldn’t really sustain the mission-of-the-week format. Naturally, there are other elements at work – the 1930s setting and the collection of shady relatives, mentions of a changed will and losses on the recent Wall Street Crash all indicate that there could be something else going on that’s less supernatural and more super-suspicious. So the question becomes, if it’s not a diabolical Dybbuk as the maid postulates, what is it and how is it being achieved? The lives of Ben and the possibly possessed Daisy Grey (Kerri Medders) may count on them finding out.

There’s some nice choices in direction. Unable to communicate with Addison because of some weird glitch in the Imaging Chamber (in/convenient), Ben gives himself a pep-talk in the mirror with the priest he’s Leaped into looking back at him and perhaps convincing him that even though Ben isn’t a man of religious faith, Father James Davenport is and that may be enough. Though there are high stakes here, it’s all played with a knowing arched eyebrow, allowing the episode to pivot both ways. On one hand all the supporting cast are out of the 2D Cluedo playbook of dodgy family member template and on the other it’s pointed out that while Ben may not, as a man of science, believe in possession that word is a pretty handy description of exactly what Ben does every single Leap, taking over bodies and making them do what he needs. Which is a fair point.  The episode, a little light exorcise though it might be, does pretty well in addressing and challenging in both directions a whole range of perceptions and points of view on the supernatural at a time when opinions were shifting notably and a whole raft of new pressures were changing society.

Internally, there’s some leaps in logic, even with the suspension of disbelief needed for the hi-jinks to hold any holy water. Some spooky events happen before the various spiked soups and jimsonweeded gin are proven to be the source of the hallucinations and some of the circumstances/twisted perceptions rely on Fr. Davenport having to ingest the tainted teas… and also, very conveniently, a local constable suddenly arrives despite the phones being down, but….hey… you go with that flow in these matters or you don’t. And, all being said,  O Ye of Little Faith actually feels more like classic (if, albeit, a ‘special episode’ of) Quantum Leap in execution than any of the stories in the new show has so far.

Some of the story takes place back at the Project and their frustrations over not being able to reach Ben or assist in any research he needs to complete his Leap. As back in the 1930s, there’s some short-hand,  diverting conversations about the power of faith, be it in the role of an Exorcist or simply in the matter of working to get Ben to eventually Leap home.

We close out the leap with an obligatory nod to the bigger continuity.  After everything is sorted out, another spectral form appears and turns out to be Janis Calavicci (Georgina Reilly) breaking through to Ben from her own version of an Imaging Chamber and explaining that the interference (which – aha –  stopped Addison communicating with Ben for a majority of the Leap) was down to her hacking and momentarily hijacking the system. Janis is there to warn him that… and then he Leaps! (Curses!).

Early reports suggest that the steady, if slight, drops in each week’s viewing figures may have been reversed for the first time since the premiere, so it will be interesting to see if next week’s episode (being marketed as the Fall Finale – suggesting there won’t be any more Leaps before 2023) continues the positive trend – and hopefully gives us a little more to go on with regard to the Project’s problems in the present. 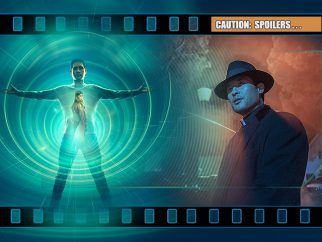 ‘Devil’ in the Details: Amazon killer chiller is a Schrodinger humdinger…