With over half their number in custody and survivors spread out, how will anyone escape from Outpost 22?

The Commonwealth has something of a final solution to those that may threaten its continuity and Pamela Milton spends little time rounding up those she deems a danger to the realm. But the survivors of Alexandria and Hill-Top do not go down easily and those who manage to escape from the city or the prison convoy are desperate to find a way for those who remain captured.

Surviving it will be hard… will getting out (or in) be impossible?

If there was any doubt about the less pleasant side of the Commonwealth and how its continued existence is based on ‘just don’t question it‘ power structures, then The Walking Dead removes all pretense with Outpost 22 and all the analogies make way for harder hues and truths. Where once unpleasant actions were politely buried behind window-boxes and closed curtains hid all sorts of questionable decisions, this episode takes us fully outside of the walls of the city and away from all those faux-niceties and political posturing. Yes, it’s no surprise that the Commonwealth has a truly nasty underbelly and that we would see it sooner rather than later (after all, there’s only a handful of episodes left until the finale) but the existence and realities of the titular prison feel overtly and even unimaginatively lifted from a blatant fascism playbook: convoys take hooded and shackled ‘dissidents’, ‘trouble-makers’ and ‘undesirables’ to work in hard labour camps and workers are stripped of their rights and even basic identities.  There’s every ghastly historical horror element of suppression here except the actual shaving of heads and tattooing of numbers. Yes, it’s a concentration camp / gulag from which some of our characters plan to escape and others plan to help them. It’s not subtle and perhaps a little too on-the-nose with this ‘Outpost 22’ suddenly unveiled as an infamous location that even the Commonwealth’s main soldiers speak of in fear and hushed whispers. (The fact that it turns out to be a retrofitted Alexandria is also something of a surprise).

The problem here is that the series has been here before and not just literally – through the years characters have been imprisoned in facilities run by tyrants, madmen and cannibals and so the tension is not so much in them being in a horrible prison, (plus ça change  etc etc.) but simply in knowing that in its undying days, the show might actually imbue it all with real peril and follow through on killing some of its main cast (though, of course, even that tension is diluted by the number of planned spin-offs featuring some of the major players who must survive to do so). After being separated out on the prison bus, the prisoners try to gain their bearings with both Negan and Eziekiel (hardly the best of friends) forming an uneasy alliance and clocking that escape will be far more difficult than it appears (those who try are gunned down by other soldiers). They instruct Kelly not to try less they meet the same fate. Negan is worried about his pregnant wife Annie but receives no comfort from his captors on the matter. Yes, it’s all pretty bleak

One of the keys to this episode is several factions of our survivors working for a common cause but having to work blind from the others. With the exception of Daryl and Carol all the rest have been caught or captured at one point with some – such as Gabriel, Maggie and Rosita – affecting an escape when they flee from their transport after a guard falls asleep (which is convenient) and the bus crashes. However when they reunite in the woods they’re initially powerless to help the captured Connie (who is taken aboard the train) without alerting other soldiers and preventing the team from tracking the train and the convoy to their source (and finding the best way to free the rest). It’s a complicated situation with all the frustrations that involves – especially patience, which is not something any of our main characters have as an attribute. There are memorable moments: Daryl does what he does best and jumps on a bike to stop a Commonwealth escaping (with some nice POV footage), at one point a soldier gruesomely takes his own life rather than tell our ‘heroes’ how to get in (his last words saying that if he doesn’t his family will be punished) and in another scene, Maggie finds it difficult to kill an infant walker, especially with her own son still missing. So we know this mission isn’t going to be easy. There follows some bloody conflicts involving firearms and blades aboard the train and even though much of our characters’ successes are quiet and stealthily, it’s still questionable if they have the full element of surprise from Outpost 22. And even if they do, where are the kids being held as collateral?

On a basic level this is a solid episode of the series, an echo of some of its more rural warfare days and if this wasn’t so close to the endgame then it might well have been judged better or worse depending on your perspective. The show is definitely still worth watching but it does also feel like the right time to be bringing the main artery of the franchise to a close. Hopefully there should be some interesting pay-offs in these last few rounds. 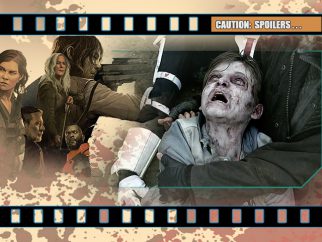