The year is 2032. Flynne Fisher (Chloe Grace Moretz) spends her days working at a small 3D-printing shop in the Blue Ridge Mountains and her nights plugging herself into her brother’s VR-reality console where she’s become quite adept at raking in record-breaking high scores and wins. She has the kind of skill-set that enables some extra income on the side, but most of that goes towards the medication her mother desperately needs. Her brother is no slouch in the gaming department either, but Flynne worries that Burton (Jack Reynor) has addictions of his own and of the two siblings, she’s the one who often ends up often taking the most responsible choices, in and out of the games.

When Burton receives a new system to beta-test (largely based on the erroneous assumption that he’s the better player), Flynne enters the system instead only to find herself in an immersive experience that feels impossibly real. She appears to be in an askew version of London and is tasked, as part of the ‘game’, with committing a unique kind of hi-tech robbery. But impressed though she is with the interface, it soon becomes apparent that there’s a very different set of stakes to this ‘game’.

Now Flynne and Burton have double trouble…. a local drug syndicate that doesn’t take kindly to their real-world resistance and a vision from the game telling her he’s from 2099, that her game ‘adventures’ are real, that’s she’s using a ‘Peripheral’ body and  warning that a group of elite soldiers are on the way to kill her and everything she cares about…

Any series inspired by the works of William Gibson, the father of the Cyberpunk genre, is probably going to be worth checking out. There’s been a scarcity of such direct productions despite his influence across several media through the decades and there’s certainly a lot of elements in the new Amazon Prime series The Peripheral that should be immediately of interest, even if they don’t all quite gel from the outset.

If you felt that Westworld – ambitious and stylish though it undeniably is – had grown a little self-absorbed and chin-stroking, somber and convoluted by the time it reached the end of its fourth season, then  The Peripheral could feel just a little more accessible. But only a little. It’s still laboratory-engineered from the same gene-pool. Swaggering out like the backwater, meth-making cousin of Westworld’s AI-intrigue and the Matrix‘s metaphysical questions along with a plain-speaking Ozark mentality  – this is the kind of DNA-spliced cross-genre production likely to simultaneously destroy a few brain-cells in the telling while sending the rest into a tizzy.

Philip K Dick’s We Can Remember it for You Wholesale was ultimately adapted into Total Recall, but Gibson’s Peripheral could be monikered as We Can Predict it for You Wholesale. You don’t have to know in advance that this comes from the gestalt mind of married visionaries Jonathan Nolan and Lisa Joy, as a few minutes it’s impossible to ignore. The team are collectively responsible for Westworld, with Nolan’s work also including Person of Interest and co-writing the likes of Memento, The Dark Knight and Interstellar and Joy’s credits including Pushing Daisies, Burn Notice and the recent feature Reminiscence with Hugh Jackman firmly in the same realm of the senses). That catalogue of credits both helps and hinders The Peripheral because it’s all very much like a minor variation on a theme, not so much something new and fresh from them but a picturesque backroad detour not too far from the road frequently travelled.

The show tries to balance the small-town intrigues of a 2030 West North Carolina town with the bigger, globe-spanning stakes whenever the characters plug in and tune out but though well done it takes several episodes to settle, largely because there’s a vast range of characters to keep straight in both settings.

Casting is usually key. Chloe Grace Moretz helps the centre hold from the start. Moretz cuts through the more complex tech as Flynne, the ass-kicking, smart-talking ingenue, the smarter of two siblings who nearly make ends meet through multiple dead-end jobs and an innate ability in the cyber gaming-worlds of the 2030s. At 25 Moretz is already the veteran of key genre entries (think Hit-Girl, Let the Right One In, Carrie) and has shown she can handle all sorts of genre and mainstream roles that demand big things from a small frame. Flynne needs to be believable in both the ‘real’ and ‘future’ worlds and Moretz makes it work. (That being said, one wonders what Ozark‘s Julia Garner might have made of the role).

Jack Reynor is also solid as brother Burton – a role that could easily have been less important or notable in lesser hands. Reynor (Midsommar, Transformers: Age of Extinction and Strange Angel) gives us a character that undeniably impulsive and driven, but over the first three episodes we also see his smarts, his bravery and physical presence all come into play in service to protecting his family. The ‘future’ cast are all played in enigmatic fashion. Gary Carr as Wilf Netherton is our key future character who seems emotionally invested in Flynne’s survival. However others such as T’Nia Miller (as Cherise Nuland), Charlotte Riley (as Aelita) and J J Feild (as Lev Zubov), while all making immediate impressions, are played so being so elite and aloof  that it’s hard to get a handle on them as characters.

The 2030 domestic problems range from Flynne and Burton’s mother being in the latter stages of a cancer diagnosis (the fatal specifics of which she’s kept secret from her kids) and them already crossing the local drug-dealing gang who provide black market pharma with faux-benevolence. They’re headed up by middle-management thug ambitious rural kingpin Corbell Pickett a man of airs and graces and questionable online tastes of his own (and essayed by Louis Herthum who played the more mild-mannered Abernathy in Westworld). Pickett is that kind of character that might believe his own hype – he’s legitimately run neo-nazis out of town (or into the ground), but has done so by putting himself at the top of the community’s powerbase and will ruthlessly protect that position. There’s also Burton’s ex-army friends with whom he shares kinship and loyalty and also a certain amount of PTSD from a recent battlefield, in particular the multiple amputee Conner (Eli Goree) injured on the battlefield due to decisions made by Burton. Such trigger-ready talent becomes useful when trouble comes calling.

The other key aspect is wider word-building across time-periods, something at which Nolan and Joy are dab hands. They get the sense of a near-future (a decade or so hence) spot-on with many day-to-day aspects remaining all too familiar but with somewhat believable advances in tech. In 2030 it’s become possible to hotwire your body into such consoles and, yes, some of the equipment and interfaces are fictionally-prescient and next, next generation at least… but if they seem just too fanciful, then remember that a decade ago the affordable Meta head-sets were still a dream.

The slightly-askew future world, elegantly structured, digitally rendered down to the last pixel and synthetically surface-sterile as you’d expect from the creative team, is beautiful and intriguing in its own right, but deliberately feels like another show entirely and one, you might suspect in which Nolan and Joy feel more invested and comfortable given their history. Though the layers, motivations and lineage of the deeper story are only delivered slowly, the ‘future/time-travel/branching multiverse’ aspect in all its prestige elements and refinery is revealed early on in the dialogue, though the show tends to feel as if it’s a big surprise to the audience when it’s confirmed to Flynne herself. There’s more latitude and wilder imagination in a further afield era of 2090, though one of the key aspects of Gibson’s work and the Nolan/Joy output is that while technology evolves it often does so in a way that remains fully attached to mankind’s cycle of foibles and baser instincts. What we know from the first few episodes is that the diffident and distant power-brokers of the future are each battling for their own visions of the past and future, but how disconnected and high-brow those will be may well decide if the show can be both smart and entertaining (a balance even Westworld couldn’t always maintain).

While The Peripheral feels like the latest reaction to our collectively cursed ‘interesting  times’ rather than a seminal milestone series for the ages, I’d still rather see shows like this than simpler fare. The Peripheral, like a wave of modern dramas, is the kind of production that sets off running and expects the audience to keep up, not spoon-feeding them safe or generic set-pieces but making them pay attention and take effort to understand what’s being shown, being said or being inferred. It’s saying something and when it’s not, it simply distracts with the shiny-shiny… and it’s up to you to decide what it is and which is which.  That’s not a guarantee of a great story in the result – so many other factors come into play and it’s a delight to note that the modern day schedules are populated by some fiercely competitive stablemates – but it’s a fine place to start and it will keep me watching.

The first three episodes of The Peripheral are now available on Amazon Prime, with new episodes released every Friday… 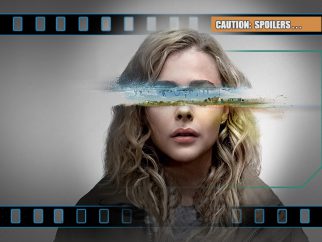