It's all subtext in an episode of 'Andor' that's still more about character than any real advance in plot...

As Cassian Andor begins to serve his time, he ends up in a prison that probably isn’t like any he’s expecting –  but still surrounded by people who are just as desperate to survive in their own way. Meanwhile both Luthen Rael and Mon Mothma separately try to forge new alliances in aid of the Rebellion.

To say nothing happens in this episode of Andor would be incorrect. However, it would pretty accurate to say very little happens and what does happen, happens pretty slowly with most of the ensemble of characters having only minute shifts in their circumstances and none of them very positive. Fortunately there’s a lot of talent involved to help it remain watchable and interesting, if not actually exciting.

The title of the series may be Andor but this is an entry that, once again, decides not to make him a main character (played by Diego Luna). After his sentencing last week, he’s shipped off to Cynus Alpha – sorry, Narkina 5 – to begin a lengthy prison sentence. It’s a penal colony that doubles as an automotive workshop, the prisoners given basic food rations /and anonymous pod accommodation and working in antiseptic clean competitive production lines for which their output level is punished or rewarded with minor shifts to their low comfort levels. It’s all very white, sterile and a bit THX-118 in presentation, along with taser-prods and red-hot floors that will take their turn to kill you if you literally step out of line.

In what might constitute a ‘sweeps’ week on a network show, the familiar-faces start to pile up across the light-years. Firstly, there’s the surprise appearance of the always reliable Andy Serkis (Lord of the Rings, Avengers: Age of Ulton, Black Panther) as Kino Loy the overseer in the section to which Andor is assigned. Technically Loy may be just another prisoner, but he’s been here long enough (and thinks he’s close enough to the end of said sentence) to turn the production set-up into a players league, one in which he fights to maintain a superior position. As always Serkis turns a potentially minor character into something more, a spittled, resentful, pragmatic figure who may have no love for the Empire or anything it stands for but is also likely to be the first obstacle to Andor (or anyone) escaping. Also on the crew is acting veteran and familiar genre face Christopher Fairbank (Batman, Alien 3, Auf Wiedersen Pet).  Toby Haynes captures the sense of inmates wanting to know what’s going on in the outside world nicely, hanging on every word and rumour, but he also gives the soul-destroying repetitive actions and sounds of the work-floor the kind of beat and pentameter and rhythm that might make up for the lack of story momentum.

Committed though he is, Stellan Skarsgård’s Luthen Rael ponders how much Andor’s survival is leaving the Rebellion (in particular, himself) exposed and wonders if they can use their operatives who have arrived on Ferrix to track him down. In the meantime he proves he’s adept at keeping secrets from others in the rebellion as much as the Empire when he visits another guest-star, Saw Gerrera (once again essayed by Forest Whittaker) to see if he can put various arms of the Rebellion to work in tandem, despite a range of big ethical differences. They’re campfire speech, huddled in a cave that’s as far away from Couracant’s spires as you can get, and give a masterclass in innuendo and subtext with each of them assessing what the other knows and may be responsible for while trying not to give anything away themselves. It’s hard to tell by the end whether they’d die for each other or shoot each other in the back if needs must.

Luthen’s operatives on Ferrix are Cinta Kaz (Varada Sethu) and Vel Sartha (Faye Marsay), two of the other survivors of the Aldhani mission and who are contemplating what they should do next to track down Cassian Andor. They’re not just soldiers but a couple, though things are strained at the moment with Cinta reinforcing that the mission comes before everything and they cling to what’s left afterwards. It’s the kind of conversation that reeks of foreboding so expect one of them to die / be revealed as a traitor in upcoming episodes. Things aren’t much better for Bix who’s tried to contact Luthen through her previous under-the-radar signals and thereafter the junk yard gets an Imperial visit and despite running she’s captured ready for interrogation.  (The interrogator is Dedra Meero – Denis Gough – who has started to win favour from her superiors for her diligence in connecting the dots of the Rebellions recent flurry of activities. Earlier, back at an Imperial base that looks like ‘The Raft’ prisoner facility from the Marvel movies, she brought in Syril Karn (Kyle Soller) for questioning regarding his refusal to drop his investigation into Andor’s activities and they also sparred nicely, despite their difference in rank. He may be the poster-boy for indignant petulance, but she’s keeping him on a tight leash and seems to be making progress). Will Bix (Adria Arjona) be able to hold out on what she knows when most of what she knows is now redundant. It’s also not looking good for Maarva Andor (Fiona Shaw) who may have been seemingly reduced to something of a fumbling, quivering wreck but still manages to own the scenes she’s in.

Genevieve O’Reilly’s Mon Mothma also continues to look for other allies though the party-scenes in which she mingles but they really seem like the scenes we saw last week and don’t really add much to her vague political associations and strategies.

Though the snail’s pace narrative is often frustrating, the individual episodes clearly boast a high-calibre cast, solid direction and the kind of attention to detail that’s often rare in series racing each other to stunts and cliffhangers. It’s the delicate, if sometimes grubby, dissecting of power-structures and the examination of very human people and ambitions acting as the smaller cogs and wheels (that can, in turn, make or break a system) that define this ambitious  Disney+ show as something wholly different from many of the speedier, zippier but predictable offerings available and that’s at least to be applauded. 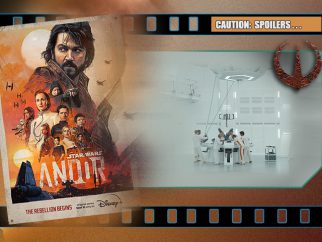 A SanFran Staite of Mind? Retooled QL pilot gets X-plored…