A SanFran Staite of Mind? Retooled QL pilot gets X-plored…

It’s 17th October 1989 – to be more precise – around 5:00pm and Ben Leaps into the body of John Harvey, man who has just been told by his wife Naomi that she wants a divorce. But the couple may have bigger problems when Ben realises that the date is specifically important, it’s the day of the ‘Loma Prieta’ San Francisco earthquake and his immediate world is about to collapse around him – emotionally and physically.

Ben isn’t here to save a marriage but the life of the couple’s son who, history recalls, died in a building collapse less than an hour after the first seismic activity. Now ‘John’ and Naomi must race across the city to prevent that death, but with mass casualties and chaos in the streets, is time on their side?

Meanwhile back at the Quantum Leap project, the team try to find answers to not only Ben’s current dilemma but also to research clues as to who the other Leaper they encountered may be…

The fact that this was the episode originally pitched (and shot) as the show’s pilot and was then tweaked and moved down the line to Episode Six didn’t initially instill any real confidence that it would speak to Quantum Leap turning a corner or finding its feet after what has been an inconsistent start. However, while the result doesn’t push any boundaries, it’s ironically far better than the preceding Wild West story. Unless you know that half the episode was reworked, you’d probably not be able to tell it was meant to be anything else than a regular chapter… except perhaps with Addison switching hand-link designs and that there’s clearly been a lot of extra time and money (particularly on VFX) spent on it.

In some ways, the Leap is the kind of story the original Quantum Leap did on a weekly basis – the leaper inconveniently jumping into the middle of a situation, trying to get their bearings there and then finding wrongs to set right, often against bigger backdrops, the ‘kisses with history’. This episode of the revamp does all those things well enough, hitting the expected story-beats.  Ben Leaps into the middle of a conversation with a woman who appears to be his wife and seems to have just said she’s going to divorce him… the kind of thing to which a guy should be paying close attention! Ben muddles through until the penny drops, not helping the situation – though the conversation gets derailed when Ben also puts together (amazingly quickly) the when and where he is and what’s about to happen to the people around him. The ‘event’ is the San Francisco earthquake of 1989 and they manage to escape from in the short-term, but the challenge of the Leap is familial – trying to stop the news of the possible divorce of his parents from driving a young boy, Jason, to an untimely death elsewhere during the earthquake.

Firefly‘s Jewel Staite plays Naomi, John’s wife who feels guilty that her demands to move to a job and area with better prospects may have led to the irreconcilable differences the couple now face and the alienation of her son. It’s not a particularly demanding role, more a motivational force but it’s played with conviction. One does wonder how events will play out post-Leap if John doesn’t remember everything that happens.

Along the way, Ben feels a real connection to his mission of the week as he starts to piece together childhood and the events that motivated him towards being a success. He too had had an argumentative relationship with his mother (who had uprooted him to bring him to the US) and when she suddenly died when he was a young boy he lost that important connection and perceived it as his own fault. Certainly it helps with filling in some details about Ben – so far he’s largely been a cypher, obviously a brilliant scientist and a generally nice guy, but perhaps not the most demonstrative and certainly with the ability to keep suspicious secrets from those he loves.  One clear link back to the original show is when Ben realises that the year he’s in will allow him to speak to his mother again. Though Addison hesitates on giving out informaiton that might have unintended consequences, she gives him the number, though Ben Leaps seconds after making the connection. (Sam Beckett had a similar emotional moment back in the original run).

The directing credits are given to both Helen Shaver and Chris Grismer. A considerable amount of the episode appears to have been reshot or subsequently reframed with alternative ADR.  Much of the 2022 timeframe featuring events back at the Project was already used in the pilot, so all of the sequences in contemporary times shown in this week’s What a Disaster are new. Mission-wise it’s not hard to see that though the pilot’s Leap may have reflected some of the original show’s mission statement, it could have been deemed too lower-stakes for the momentum an opening salvo might require. I’m not sure the new pilot itself didn’t ultimately have other problems, but in some ways the use of the footage now closes some kind of loop on the matter.

There’s a lot of discussion back at the Project (some of it still the kind of creakingly overt exposition that’s now really starting to grate) but also about the second apparent Leaper Ben encountered in Salvation or Bust. It’s the kind of thing you expect the show to overtly drag-out, but the theories are offered and some of the answers given pretty quickly. The team list the worrying possibilities which include a foreign power managing to create their own Quantum Leap-like project, a private organisation doing so (Ian pulls a face at the mere idea of Elon Musk being able to time-travel) or the more extreme 4D possibility that whomever the leaper is, he may not have actually started Leaping yet – after all, if Leapers can go back in time then someone could be Leaping from some point in the future into our present. (It’s glaringly weird that no-one openly speculates that Janice Calavicci might be the obvious person of interest given recent events, which should be the logical go-to?). It’s enough to give Marty McFly an aneurism but the possibility of the future theory seems to gain traction when the team try to identify the face of the leaper from their recording of events in the Imaging Chamber. (Ian initially insists on calling him ‘Leaper X’ much to the consternation of Magic). There’s also some fun here in the fact that Ian also has to remind an impatient Magic and Jen that looking through trillions of entries in the facial recognition software records may be possible, but it doesn’t happen with the conveniently instant alchemy regularly seen on television crime shows… Of course, then that’s exactly what happens when the database unexpectedly pulls up the face of Richard Martinez, a young military officer with a spotless track-record.

Magic and Jen go to visit Martinez at his home and find that he’s either an amazing actor or genuinely has no clue why they are there. He’s the son of an immigrant, willing to work hard for his continued citizenship and immediately wants to accept any mission they give him. Magic begins to be convinced that though this is the man Ben encountered, there’s no way this is the other Leaper… YET. The theory that he will become a Leaper at some future point starts to hold water. This seems to add to the conundrum-factor beloved of many of NBC‘s genre shows, creating unexplained long-game connections and conspiracies that are slowly spooned out around the more immediate challenges of a week. There’s no problem with that unless that becomes the heart of the show rather than the redeeming nature of the Leaps themselves.

Overall, there’s some welcome momentum here, or the illusion of it, but it seems as if the show will be actively pursuing the mystery of why Ben initially Leaped and the possible opposing forces moving in parallel …rather than the original’s remit of  concentrating on  the problem of the week  and never fretting too much about the forces around it. 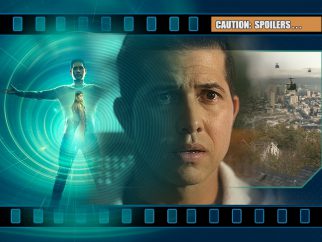 Gallifrey goes Global as ‘Doctor Who’ heads to Disney+…