‘Devil’ in the Details: Amazon killer chiller is a Schrodinger humdinger…

After a wave of killings, social-worker Jessica Raine has haunting questions but does Peter Capaldi have answers ?

Lucy Chambers does not have an easy life. Her senior role in social services and child protection provides all the expected daily stresses of the position and at home she has a troubled child of her own, Isaac, who seems to have little emotional reaction to anything. She has a mother who appears to be suffering from dementia and Lucy is separated from Isaac’s father even dropping his surname (though he’s still in the picture and looking to reconcile). It’s not surprising that she sometimes wonders if it’s her who should be having therapy and not just Isaac.

But Lucy’s life is complicated even more by her waking at 3:33am every single night from visions of things she cannot know and having her days inflicted with brief images of crimes and events that may never have happened.

And now…or maybe then…or maybe soon… she’s sat in an interrogation room , bruised and battered and opposite a sinister figure who has been imprisoned for being a serial murderer.

And he has an impossible story he needs Lucy to believe…

“What is the worst thing you’ve ever experienced?”

I was about to start off the review of The Devil’s Hour by saying that it is the kind of ambitious, unsettling and gloriously non-linear story-telling that would likely give even Steven Moffat a nosebleed. So, perhaps it’s no surprise that on closer scrutiny, Steven Moffat and Sue Vertue (Moffat’s wife and a respected veteran in her own right) are both executive producers on the new Amazon thriller. Tom Moran is the creator and writer of the six episodes bringing a consistent flair for dialogue and situation and it’s equally impressive from a director’s point of view (four episodes by Johnny Allan and two by Isabelle Sieb).

The trailer for the production suggests a stylish police thriller with something innately sinister and spooky going on – which is still a fair description – but, like the marketing imagery used to promote it, that’s only part of the equation and something of a sleight of hand. What might initially feel like a procedural heavyweight ( ‘Amazon Prime Suspect‘ if you must) quickly spins out into something far more complex – a parable about the nature of time, regret, unconditional love, morality, mortality – all encompassed in a story that may be being told out of order or certainly subject to different perceptions. The preview also tends to lean into the idea of Peter Capaldi as the star and Jessica Raine in the supporting role (having a distinctly Lecter/Starling relationship). This, it turns out, is also very much not the nature of the characters’ connection, though this is a story about is definitely about the flow of information.

Yes, Capaldi’s presence is the pivot and pivotal crux of the story. The actor, never less than impressive in everything he does, channels a shifting persona that is simultaneously diabolical, forlorn, frustrated and damaged. Seemingly becalmed in his imprisoned situation, his Gideon Shepherd is never less than quietly burning up the screen like some cold fusion-powered nucleus of dark energy. But what he’s not is another default super-sleuth Sherlockian character full of contemptuous smarts… because God knows we’ve had enough of them to start their own genre. But Gideon is, by his own admission, a dangerous man with interesting and unique insights, however he is also all-too-human in his unrelenting efforts to get his story across. He knows he’s possibly better-informed of the bigger picture that he alone says he perceives, but there’s no vanity here –  because has no wish to be. (“And in this delusion of yours…are you a time-traveller or a fortune teller?” – “Neither… and both.” raises a metatextual smile given the production credits).

Capaldi, as hero, villain or something in between, is always an asset, but this, in truth, is actually Jessica Raine’s triumph. It’s her performance as Lucy that anchors proceedings and with whom the audience experiences the askew nature of events. Raine gives us a character with whom we immediately identify and sympathise, a person facing challenges on every conceivable front and still finding a way to keep going, bending but not quite breaking. We applaud her resilience, bemoan her mis-steps, grit our teeth at the people who block her way and share her rare moments of joy and triumph and – like her – we want to know what secret lurks at the edge of her consciousness and the role she’s playing in events.

The rest of the cast rise to the challenge. Nikesh Patel plays DI Ravi Dhillon with a huge amount of humanity and gives him innate qualities that help and hinder his role as an impartial investigator into an ever-growing spiral of chaos. Phil Dunster as Mike, (Lucy’s estranged husband who grows increasingly frustrated in trying to balance his love for Lucy with his inability and anger in not finding any way to connect with Isaac) hovers between sympathetic and suspicious. Other supporting players such as Meera Syal and Alex Fearns also make themselves known and appreciated in key scenes. But special note must be made to Benjamin Chivers as the young Isaac whose performance resonates because it is so minimal despite being so important. With just a look, minor shuffle or short sentence he rises to every challenge to invoke sympathy and heartbreak, often holding the screen even when accompanied by the older actors.

Without revealing too much of how things are ultimately explained or resolved in the final chapter, it’s possible to trace some of the inspiration for the central concept of The Devil’s Hour to other stories. There are pieces here and there that could be comparative touchstones and I can think of one novel and even a currently popular comic book’s long-game story-arc that have invested themselves in a similar specific idea – but that doesn’t stop the serial from being tremendously impressive in its ambition and the result is likely to encourage a binge-watch. (My wife and I watched it in a single weekend, throwing out ideas as we went… and me being told to shut up every time a theory imploded).

The serial, self-contained at six episodes, is well-paced (often a fatal obstacle in many a modern drama that extends itself beyond its natural length) and plays with the ideas of cause and effect (or, more accurately, effects and cause) but as much in a spiritual way as scientific, examining very subjective truths. Serials like this rely a lot on ‘sticking the landing’ and the serial has a few too many plates spinning to dutiful attend to them all by its end… however, while I won’t go into specifics here, it will likely produce conversations around the water-cooler, open to various interpretations, all of them arguably valid and entertaining and yet without leaving you dissatisfied or cheated… In short, the expertise of Tom Moran’s writing, the direction and the performances combine in a manner to have its Schrödinger’s Cake and eat it.

Not flawless, but certainly compelling, The Devil’s Hour is, in turns, terrifying and sad, bleak and funny, profound and strange… the sort of endeavour that requires effort and concentration from its audience but rewards such by working on a number of dramatic levels that should resonate far beyond its Halloween debut and as more than just your next worthy chiller-killer binge-watch… 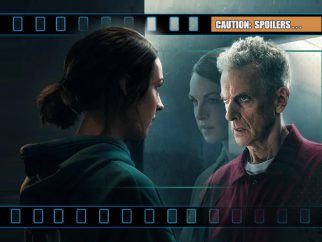