The King is dead... but in the race of succession, who will succeed and how far will they be willing to go?

The king is dead. But those with a vested interest in who succeeds Viserys fight an uphill battle to contain the information.  However there’s a more immediate problem: if Aegon – Second of his Name – is going to actually wear the crown instead of Rhaenyra then he has to make it to the ceremonial crowning intact… and to do that he has to be found.

Someone, somewhere must know where he is, but as he tends to frequent the areas where people go to get lost and where the shadows are populated by people who know the value of commodities, the race is on to find him before someone else does… or to stop him being found at all.

Viserys may have shuffled off to join the ‘choir invisible’ but the news of his demise is largely contained in the hours following. But this is Westeros… so that’s not going to last, is it?

Though one suspects that things went far less darkly and far more cordially in the hours after the passing of Queen Elizabeth II, it’s fascinating to watch any Royal machine go to work after the death of the monarch, balancing public perception, long-planned etiquette and perhaps a secluded range of internal egos. In most cases, such ‘machinery’ will never be known but we’re now talking about the great and the good (and the not so good) of Westeros and if there’s one thing guaranteed to be more dramatic than weddings, its coronations.

It doesn’t take long for Alicent to summon her father Otto Hightower, the Hand, and the royal council and tell them of Viserys’ last words. Though we know the late king was actually mumbling about the original Aegon and the prophecy surrounding a future saviour of the realm (who, Game of Thrones fans know will turn out to be Jon Snow, centuries later), she innocently, but fatefully, believed that Viserys had changed his wishes to prefer their son together to take control. It’s music to the ears of Otto who has long had a plan to secure Alicent’s son and his grandchild as successor instead of Rhaenyra. Alicent is appalled at the degree of plotting that has been going on under her nose. Yes, she’s desperate to secure her  son’s lineage to the throne and understands the secrecy and duplicity at work but has no desire to see Rhaenyra and Daemon actually murdered to secure it. It appears father and daughter have quite different attitudes as to what needs to be done. Alicent pleads with Rhaenys (Eve Best) – the woman who, decades before, should have been the monarch instead of Viserys – but she has no interest in helping anyone usurp the throne and the royal bloodline and makes her own plans…

For an episode that doesn’t actually feature either Princess Rhaenyra (Emma D’Arcy) nor Daemon (Matt Smith) in person, they cast a long shadow over proceedings and there’s a lot of sleights of hand and murderous manipulation worthy of them.  Otto, always a pragmatic mover-and-shaker is even more darker and sinister than usual as he orders death and deception for all that could hurt their plans and even Ser Criston ends up coldly killing the loyal Lord Lyman Beesbury  played by screen veteran Bill Paterson) who is one of the few people willing to stand against them. The search for Aegon genuinely ranks up the tensions as rival searchers close in on where they believe him to be…and we’re not entirely sure who is going to get to him first and what they’ll do.

With a little help, Rhaenys escapes her captivity but on the way to a seaward escape, she’s separated from the soldier assisting her and dragged along with the crowds towards the coronation venue, which she is delighted to find is above the dragon pits… and perhaps her salvation.

Aegon is eventually found and even though he truthfully doesn’t have much interest in the responsibilities of the throne, is forced to go through with the coronation. The climax of the episode, is not so much Aegon’s ascension to the Iron Throne as the moments immediately following as the hall erupts first in enforced cheers and then in chaos as Rhaenys, sitting on the back of her beloved dragon Meleys, rises through the disintegrating floor and faces everyone down. It’s one of the moments where everything stands still for a second as The Queen That Never Was and Meleys get ready to incinerate all and sundry. Even Alicent, perhaps the most innocent of the motley bunch (if we’re grading on a severe curve) seems to realise she’s about to meet her maker. And then…. knowing that she holds all their lives in her hand,  Rhaenys – truly a mother of dragons – simply turns and rides off into the sunset to warn Rhaenyra… with everyone back at the ruined altar knowing that their lives were only spared on Rhaenys’s whim. One might wonder why she didn’t kill them all, but  apart from that curtailing  the entire series, it’s wise to remember that while the Hightowers may have been trying to subvert the true order of succession, Rhaenys has no particular love for Rhaenyra either. What she actually does next and the forces she may mass will be interesting….

The visuals of matriarch Rhaenys riding the dragon are as impressive as you’d expect, providing a memorable must-see moment and a few seconds of ‘This is Game of Thrones, they just might do this…‘ regarding wholesale slaughter but also notable the soundtrack, though the series usually has its own recognisable music and there are moments here that the accompanying beats seem more reminiscent of Westworld.

All in all, an essential episode of House of the Dragon, built on the tensions of the story and the talents of the on-screen cast and off-screen crew… 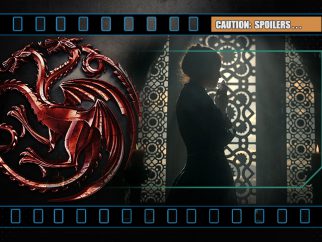