The dark is rising, but as Strangers stand tall and the 'rings' are finally forged, will the alloys really be allies?

The Stranger may have departed the Harfoot caravan but is still being pursued by a trio of clearly powerful beings. As Nori and the trio separately catch up with the imposing figure, there’s a moment of revelation for all concerned, but the confrontation will have its casualties. Has Sauron finally returned?

Elsewhere, Galadriel and Halbrand arrive at Celebrimbor’s castle where they find the architect and Elrond frustrated over how to use their small amount of Mithril to save the Elfs. Perhaps Halbrand, a skilled ‘smith will some insight – but does he also have a vested interest?

It might be the start of the networks’ new season, but with streaming such a powerful force nowadays, there’s really no such distinct line anymore and several platform shows are finishing their runs. We’ve had She-Hulk: Attorney at Law bowing out last week, House of the Dragon is about to burn off its last episode and Friday also saw The Rings of Power close-out its first run.

There are some major revelations in the finale (‘Alloyed‘) and though Tolkien purists will likely find considerable fodder for quibbles, those of us who enjoy – but do not have an encyclopedic of – his works likely had a few genuine surprises in there.  The identity of Sauron was always a dangling carrot and there was no shortage of contenders. Most indicators pointed towards the Stranger (Daniel Weyman) who had fallen from the skies who might have seemed initially benevolent but suffered from amnesia about his own origins and clearly had some major, dangerous powers running through him. He was being tracked by beings who clearly had power of their own and had previously thought nothing of decimating groves of trees and conjuring up major wattage of their own. When they catch up with him this week it turns out that they’re not actually meaning to do him any harm but are there to guide him to Mordor where he can once again become Sauron and spread the darkness across Middle-Earth. So, that’s sorted? But ‘ten points Hufflepuff‘ (sorry, wrong franchise) if this early ‘revelation’ seemed a mite suspicious. The Stranger didn’t seem like he wanted to do any darkness-spreading and it was so early in the episode that it felt like a potential misdirection and sleight of hand. Ultimately the Stranger saved the Harfoots who were following him (excepting Lenny Henry’s Sadoc Burrows who gets a melancholy write-out) and disposed of the albino acolytes who only realised their mistake too late to win. No, the Stranger isn’t Sauron and, in fact, appears to be the opposite of Sauron, though what that truly encompasses remains cloudy for now (Elven eight-ball says ‘Ask again later‘). By the end of the episode, we know he is a wizard of some sort (surely not Gandalf?) and he is heading off to a place called Rhun with Nori (Markella Kavenagh) in tow on an adventure to find his true purpose (because as the now more eloquent mysterious figure points out ‘A journey is what you take alone, an adventure requires company…‘ which admittedly does sound Gandalfian).

There’s no sign of Orc-King Adar this week. Despite his protestations that he wasn’t Sauron and had actually killed the legendary tyrant himself, most don’t trust a word that dripped from his lying lips and it appears that though very formidable in the strategy stakes, he’s clearly Middle-management Middle-earth wannabee conqueror. If he’ll likely be an important presence next season, but how will he take the actual Sauron’s return?

And then we come to Halbrand (Charlie Vickers). He’s seemed the heroic figure throughout the first season – the kind of reluctant warrior drawn back into a conflict and revealed to be a long-lost king that are sprinkled through many a fantasy tale. He’s had secrets, but there’s been no real reason to be suspicious of him thus far – for Valinor’s sake, he’s been battling monsters, getting seriously hurt and even been flirting with Galadriel (and Galadriel might even have flirted back, though it’s hard to tell through that stiff upper-lipped demeanour). However a strange turn of phrase, offering a solution to Celebrimbor (Charles Edwards) and his ring-making and a furrowed brow gets those elven ears pricked up… and after believing she was smart enough to have worked out his lineage as the lost King of the Southlands, she decides it might be worth double-checking her conclusions. And indeed, that’s a good thing, because it takes an Elven librarian only a short while to produce a family tree from which Halbrand is very much absent. He’s been deceiving her all along… or, to be more accurate, he’s let her make assumptions and happily obliged in going along with them. Yes, HE’S Sauron!  He claims he’s not a bad guy, simply someone who wants absolute power of Middle-earth and who would bring an end to chaos and suffering. He shows Galadriel (Morfydd Clark) visions of his plans and tries to use her memories of loved ones to convert her, though she refuses to waver. She realises her grave mistake of getting Sauron close to the rings being built and after Halbrand/Sauron vanishes she decides that the only way to thwart him is to produce not one ring (too much power), not two rings (which would likely lead to division), but three rings for the Elfs – to save them – with other rings to be forged later. She doesn’t directly reveal Sauron’s deception or her own failings though her brother Elrond (Robert Aramayo) begins to suspect some of it.

There’s also a cursory visit back to the port at  Númenór as Queen Regent Míriel (Cynthia Addai-Robinson) who was blinded in battle, leans as needed on right-hand Elendil (Lloyd Owen) and finds that, on her return, her father has died (though not before passing some secret knowledge to Elendil’s daughter Eärien – played by Ema Horvath – who (in his fading state) he thought was Míriel. (Honestly, it’s been quite a week for fantasy series to have ailing kings relating information on their death-beds to the wrong people!)

So… the titular Rings of Power are finally here and we leave things with Halbrand/Sauron looking very much like a corrupted Anakin Skywalker and heading down into Mordor.  It’s been quite an epic run so far and while I understand the problems some have had with the show and the liberties taken from the source material, it’s been a standalone a success on most of the important levels – breath-taking visuals, interesting characters and a wide scope of interlinked stories. It doesn’t entirely line-up with the books or even Peter Jackson’s legendary big-screen outings, but it does feel a valid part of that greater whole. It may be another eighteen months before the second season (just starting to be filmed in the UK) is ready for screening, but it does seem it will be worth the wait… 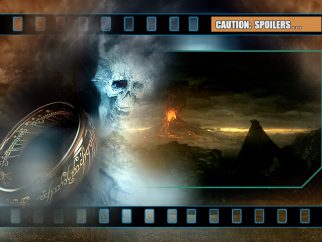