In the penultimate episode, the Southlands have been devastated, but the survivors aren't finished yet...

The Southlands have been devastated by the volcanic eruption and as the survivors stagger through the ruins, it’s clear that the dark is rising once again throughout Middle-earth. But as the effects of the disaster reverberate through the various communities, near and far, and alliances tested… there are new resolutions made for the future…

While there are those who will find fault with The Rings of Power – and its format and style certainly aren’t for everyone – there really can’t be a more visually satisfying series currently on screen. The cinematography and FX work truly set a new standard and often enough they are not merely used as decoration, but a fundamental part of the story-telling itself. That’s never more evident than in the latest episode The Eye. Last week’s chapter may have had a lot of fast-moving action and set-piece battlefield drama to test post-production, but the quieter, desolate aftermath is truly haunting. From the very first moments as Galdriel wakes up in the Southlands landscape all she can see is the wake of a terrible event, everything filled with volcanic ask, smoke, debris and death. With a budget that allows for such moments to play out at their own pace and scale, much of the long, first scene is merely Galdriel stumbling around the rubble, the audience as disorientated as she is and truly taking in the sheer scale of desolation. The red glow of the land and thick ash cloud give an eerie, Hiroshima-like atmosphere to everything it touches and to what follows. It’s attention to detail and yet minimalist take sets out the degree of loss and as a horse, its mane on fire gallops past in iconic fashion, it’s all worthy of the big screen.

Much of the following scenes are the survivors, often dislocated from others, finding their separate ways out of the valley, some losing people important to them. Cynthia Addai-Robinson’s Queen Regent Míriel is only aware she has been blinded a few moments after the audience understands her injuries, Theo (Tyroe Muhafidin) carrries the weight of his actions prior to the tragedy and Lloyd Owen’s Captain Elendil – facing the possible loss of his son – begins to regret ever plucking Galdriel and Halbrand (Charlie Vickers) from their raft. Halbrand himself is gravely injured but manages to be bandaged enough to once again ride out with Galdriel as the Numeor army departs home with a promise from Míriel to return. Nazanin Boniadi as Bronwyn and Ismael Cruz Cordova’s Arondir also make it out, though for a time it looks as though both were lost.

In some ways, this and the previous episode are The Empire Strikes Back episode of the first season, not so much in iconic greatness (the pace is too slow) but as a run that first introduced us to the people who they wanted us to care about and now utterly ransacking their lives and land, leaving them alive but far from victory. Not everyone makes it out of that chaos, but those who do, do so with resolve.

The episode balances the seriousness of the Southland drama with a smaller but foreboding problems for the Harfoot travelling caravan. When they come across the Grove where they usually gather supplies, they find many of the trees burned – hit by the debris and power of the exploding volcano so many miles away (the eruption’s sheer power bridging the distance). But when the Stranger tries to help them, there’s more near-injuries and the Harfoots effectively send him on his way, no longer feeling safe in his presence. No sooner has he gone than the Grove springs back into life due to his efforts, making the community wonder if they did the right thing in ‘banishing’ him. However when his equally mysterious pursuers turn up and burn the Harfoots caravan (it really does seem to be a case of alternating good news / bad news for them), Nori Brandyfoot (Markella Kavenagh) and her family decide to go looking for the Stranger to warn him of the danger that follows.

Elsewhere Elrond and Durin tries to convince the latter’s father, the King, to let them mine mithril, the element of which there now seems plenty under the mountain and which the elves need for survival. But the elder Durin forbids it and for much of the episode we see him as a stubborn fool unwilling to move forward. However in the last moments of The Eye we see that his fears could well be well-founded as the Balrogappears to stor miles below. It’s actually the dwarven moments that seem the most well-balanced this week, with scenes of both humour and pathos throughot.

It’s the very last moments of the episode that send a chill as what many suspected is written in stone and fire. The volcano will be known as Mount Doom and the Southlands, forever scarred by vents become the shadow-vale… Mordor.

There have been moments where I’ve thought the series was self-indulgent and while Galdriel is the erstwhile hero of the piece, her aloof Elven demeanour and clipped vocal cadence often grates. But as we head towards the end of the run this month, I think the series has accomplished what it set out to do and even though purists may have legitimate quibbles, the result is still breath-taking in many of the necessary ways. 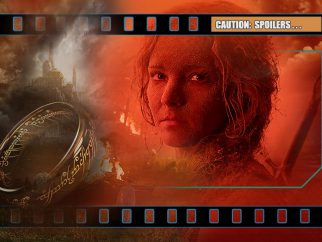