Marvel / Disney+'s 'Special Presentation' is a nice slice of Hallowe'en hokum and effective side-step into scares...

Ulysses Bloodstone is dead, but the legendary master of monster-hunters, estranged from his own daughter Elsa to whom his power and title would likely have passed,  decided that posthumously, others must fight for his title. And so one stormy night, a motley crew of status-seeking slayers gather at the Bloodstone mansion to be told their task. They must make their way through the state’s maze-like gardens and retrieve the bloodstone itself – an artefact of power that has been attached to their quarry. they may use any means against the creature they hunt – and each other – but there can be only one winner.

However Elsa has joined the gathering, wanting to claim the family legacy and steer it in a new direction. And to complicate matters further, one of the hunters is not whom they appear to be and has no intention of claiming the Bloodstone power. They are there to help a friend in need and as the hunt begins, the wolves in sheeps’ clothing become apparent…

Largely depending on your point of view, Marvel could be accused of both sticking to their template of familiar themes and yet taking a lot of chances on what they’re trying to build upon. Certainly, their current state of affairs has had plenty of diverse and interesting offerings but they seem to lack the cohesion and the more obvious blueprinting of their previous mission statement, the kind that we can see looking back at earlier Phases of their empire-building. In the last year they’ve been swinging wide in wildly different directions (Loki, Hawkeye, She-Hulk, Multiverse of Madness, Eternals) entries that initially feel deliberately diverse – but more accurately feels like the studio is striding forward, dipping their toes in wider waters yet still holding back, wetting a finger and trying to get the direction the winds should be blowing them.

In general, Werewolf by Night works delightfully well, not reinventing the wheelhouse but treading the line between its reverence for classic horror turns, introducing some new characters, having decent survival stakes and yet keeping a wry sense of humour about it all. In format and result, it’s a nice halfway house between cinematic movies that require ever-more gob-smacking special effects and sense of scale and – on the other side – the chaptering-out of series at lengths which allow character-building but often don’t help service the plot evenly. In a ‘special’ there’s a chance to not feel the baggage and weight of the feature film but not meander as much as the regular shows, everything barreling along but now with a more immediate pay-off. Still, there are many ways in which this first Marvel Special Presentation ™ could have gone off the rails, but it manages to keep on track and the result is Marvel‘s highest immediate Disney+ audience rating of any original project to date.

Composer Michael Giacchino directs effectively and provides the soundtrack with the music creating much of the stylised atmosphere to proceedings. Given the subject-matter there is a bit more evisceration and general carnage than you might see in a regular Marvel show, but it’s largely aimed at a teenager-and-up family audience and so there’s nothing here to get too stressed about. The mostly monochrome presentation plays into that format – as Tarantino discovered in Kill Bill, the censoring is much more light-fingered when the blood isn’t red – and the feeling is a love-letter mix of Cheney, Price, Lee, Cushing, Rocky Horror and plenty of 50s retrospective stylings and some modern pacing – in short a perfect treat for Hallowe’en.

Cast-wise, there’s a good selection: Award-winning actor Gael García Bernal is Jack (full name Jack Russell…. go with it or don’t) the man who’s slipped into proceedings not to win the grand-prize of a legacy diamond that grants its owner prestige and status amongst the monster-slaying community, but to save his friend from a grisly fate. Bernal plays it with just the right amount of bemused intensity, completely straight (often the secret of comedic timing) and able to handle it all physically and thematically.  Laura Donnelly plays our female-lead, Elsa Bloodstone, the estranged daughter of the deceased Ulysses Bloodstone, the patriarch of this unholy clan – who may be dead but had the forethought to set up this competition for his legacy. Donnelly is best known for her role in The Walking Dead though my wife initially mistook her for Jessica Jones‘ Krysten Ritter in this and there are several scenes where the resemblance is, indeed, uncanny (and this is in a week where I watched Alisson Janney’s new thriller Lou and was convinced for half the production that it co-starred Tom Hardy, only to realise it was actually Logan Marshall-Green, so it happens!). Screen veteran Harriet Sansom Harris plays the widow Verussa with manic, scenery-chewing glee and there’s an assortment of other hunters in the mix, most noticeably actor/director Kirk R. Thatcher (as mountain-man, axe-swinging Jovan) whose helmed several Muppet projects and worked with ILM/Lucasfilm on a range of high-profile projects in their special effects department and creature-design workshops… yet is still best known on camera for his bus-riding punk opposite Spock in The Voyage Home (and which he reprised this year on Picard).

The introduction of Man Thing, likely familiar to die-hard Marvel readers but a head-scratching addition to those only following the MCU, is a gamble. Marvel and DC have a history of creating mirror-images of each other’s successes... and Man-Thing is the unapologetic answer to DC‘s Swamp Thing. It has always been a cult-favourite but a bit aimless, lacking the deeper ecological/psychological impact that Alan Moore brought to the character in the DC revamp and with Marvel usually just bringing Man-Thing out a guest-star in some other occult-adjacent tale. Well-realised in CGI-performance-capture, Man Thing (or ‘Ted’ to his friends) is really the maguffin of the piece, there as the ‘prize’ for the hunters to defeat and the reason that Jack has entered the fray to save him. He’s presented as an almost-mute character with hugely sympathetic eyes, mossy, swampy body and the burning power of a small star. He’s the kind that you couldn’t build a series around but could quickly become a tv fan-favourite supporting act if he continued to be handled properly.

It’s all quite silly, reasonably plot-lite and with less to lose than some higher-profile ventures – the result being fun and efficient rather than outstanding – but anyone with an innate love for classic horror and black humour will likely find this streamlined hour of entertainment glorious fun and this may well be a way for Marvel to better service and dry-run some of its stable of characters (horror and mainstream) in the future… 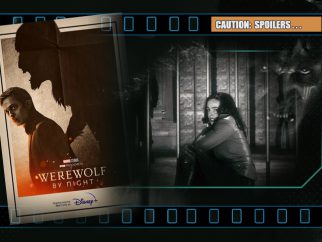 Legal Briefs Encounter: She-Hulk lawyers up for a Matt finish…