Legal Briefs Encounter: She-Hulk lawyers up for a Matt finish…

Is justice blind? Jen takes on visiting lawyer Matt Murdock in a new case, but the devil is in the details...

Jen is forced to defend the son of one of GLK&H’s wealthy clients after he attempts to be a superhero called Leapfrog and ends up with leg burns. There’s a conflict of interest as Eugene Patilio/Leap-Frog (Brandon Stanley) says the injuries were the fault of the costume itself and wants to sue Luke Jacobson, the tailor of super-heroic costumes currently working on Jen’s costume for her upcoming award ceremony. The legal suit challenging the superhero suit sours Luke’s business arrangement, but when his own lawyer arrives, things start to heat up.

Blind lawyer Matt Murdock is in town for a personal favour and quickly ridicules the case, providing an easy win against Jen and Eugene. But they may be more to Matt than meets the eye and Jen and Matt’s alter-egos both find themselves involved in stopping Eugene take things to the next level…

Will everyone get a happy ending, or will it be a case of ‘Ribbit and Rip It…‘?

With only one episode left to go, She-Hulk: Attorney at Law hasn’t quite found a consistent, firm footing. Sometimes a whimsical look at the MCU, sometimes self-deprecating comedy, sometimes social-commentary and sometimes all-out slapstick it often feels like the show – like it’s lead – has a personality problem in deciding which format it wants to settle on or lean into on any given week. This episode seems to get it about right – having moments of absurdity, some decent action-stakes and a story that while it never takes itself too seriously, at least has some charm to go with it.

Yet it’s interesting, almost creepy on an innate level, to see a more happy, mirthful Matt Murdock and his alter-ego. Over the years the Marvel Comics character has become synonymous with a darker vibe, a dour poster boy for Catholic guilt, tragedy and iffy vigilantism. His equally shadowy Netflix adaptation was the best reviewed and rated of the Marvel/Netflix partnership and likely only ended by Marvel‘s business decision to move almost all its material ‘in-house’ through Disney+. But here, with this Matt Murdock (not it seems quite the Netflix version but close-as-dammit in every aspect but the colour of the costume and the fact he seems far less mournful – though we haven’t got the full-on official word on his status) the character and actor finally get to crack some more overt jokes and there’s more hits than misses in the short-term.

It’s a dynamic moment to see Matt enter the courtroom and return to the MCU (not forgetting his cameo in Spider-man: No Way Home) and seeing he and Jen against each other in the courtroom. Jen – quite understandably – has no idea who he is: Matt is, after all, a lawyer from New York and this is sunny LA. ‘Who is this asshole?‘ she asks the audience whom she supposes is on her side, but who already know… and there’s some guilty glee as he quickly trashes her case with a little from his heightened senses and the fact that Jen’s client is a moron. Their confrontation as superheroes also works well enough with both characters underestimating the other and Daredevil’s ‘And yet my ass remains unwhooped‘ striking about the right note until it is.  Their different approaches to tackling the Leapfrog gang (are they goons, are they henchmen?) has the right balance of banter and action, though the hallway scene with Matt taking out several of the gang seems like a watered-down version of the far more visceral Netflix ‘The Raid-ish moment, remembered so fondly from that outing.

Their earlier flirtatious bar-room scene crackles with fun sexual tension (and, hey, why wouldn’t they flirt given the situation) but it still seems just a little too far when they end up in bed together near the end of the episode, feeling less organic than a stunt. Daredevil doing the ‘walk of shame’ the next day is a good visual (if that’s appropriate) punchline, but slides into the absurdity the show often revels in when every other bit of logic would have had Matt leave in his civilian identity (and which would have still have left an opportunity for Nikki Ramos (Ginger Gonzaga) to crack a joke about blind-dates or similar as she arrives.

Even as Jen breaks the fourth-wall again to say the series is ending on a happy note and jinxes it completely, the ending of the episode cranks up the drama for the actual finale with the Intelligencia website bad-guys hijacking her award ceremony and having Jen ‘Hulk-out’ which immediately panics everyone and leaves her surrounded by soldiers. I accept that Jen tearing down a stage’s back-screen and attacking her assailants might have people panicked – most of us would run from such chaos – but the show really hasn’t featured the danger of Jen going ‘full-Hulk’ since the start of the run and the sudden ‘she’s a danger to everyone around her‘ reaction doesn’t quite convince given the more pliable and celebrity public-image she’s cultivated. One suspects that the finale will be a mix of drama and comedy given the rumours it may drop some clues to coming Marvel projects (and, yes, it was hard to miss the quippy Red Hulk reference dropped earlier in the episode).

Fans will likely be divided on this.  On a She-Hulk level it’s an improvement, but in a show where it feels like it wants to be Moonlighting, it just doesn’t quite deliver more than Ally McBeal-lite with easter-eggs.  It offers no real pointers to the Disney+ approach to the announced Daredevil: Born Again series (which, if related to the comics’ story of the same name, seems to be the case) was one of the darkest and most dynamic stories ever featured in the title. Certainly a comedic approach, or even light-hearted won’t fit that, but this might be a way to draw back the barometer and offer a series that will be darker than this but offer moments of levity too. (A good story-telling conceit is to make people laugh before you make them cry and vice versa). 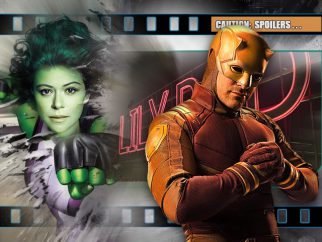