If 'Game of Thrones' is the Glastonbury of fantasy series then 'The Rings of Power' is the Woodstock...

It is the Second Age of Middle-earth, thousands of years before the stories and quests that will unfold in the stories of The Hobbit and The Lord of the Rings. But is centuries after a great war between Morgoth, a godlike being of supreme evil, and the kingdom of the Elves. The Elves, blessed or cursed with long life-spans (and longer memories) have tried to build a new world with the presumption of Sauron’s defeat. But Galadriel, who lost her brother to those dark forces, remains convinced that the dark lord is not only alive but planning his revenge, secretly amassing his forces once more.

Her fellow Elves don’t share that belief, or at least prefer not to speak of it and after much consternation, ‘reward’ Galadriel by ordering to return to Vlainor, their mystic home across the water. But Galadriel is not of a mind to follow even her king’s orders. Elsewhere, others are also beginning to suspect that something is coming. There are rumours of monsters beneath the ground, monsters rising from the deep and uneasy shiftings in various alliances.

And then there’s a light that streaks across the sky, seen by all the inhabitants of Middle-earth, each with their own interpretation of what it means. But who is the visitor it brings and what part will he play in the coming conflicts?

There’s no doubt that the considerable money spent on Amazon‘s journey to Middle-Earth exists in every frame of its new series. Vast icy wastelands, flickering torches, exquisitely twisted villages and rusted carnage of ancient battlefields glisten in a consistently impressive cinematography rarely seen on television. Occasionally the close-ups on tormented eyes linger too lovingly  and camera pans on to the smallest detail with forced perspective, but it’s hard to begrudge such moments when they work well as part of the greater whole. Though Peter Jackson was not involved with this new venture, the connective tissue abides and it would be easy to draw a visual and tonal throughline through it all to his landmark movies that set the standard.

Developed for television by J D Payne and Patrick McKay, the first two episodes are directed by J A Bayona to good effect – something that needed to happen given the show’s reported  $462 million to make. As the opening episodes unspool, (Amazon debuted the first two episodes together this week) we skip across a map of Middle-Earth, each illustrated like a static version of Game of Thrones opening credits, visiting its many peoples. The George R  R Martin adaptation and this latest J R R Tolkien sojourn will inevitably be compared with each other – The Rings of Power and The House of the Dragon debuting a couple of weeks apart on rival platforms – but while their individual ambitions and scope are of similar mythological import, their approaches differ. Westeros’ monsters are mainly of the darker, adult human variety and Middle-Earth’s speak to a wider variety of creatures and races (The Rings of Power‘s own title sequence – accompanied by the notes of soundtrack stalwart Bear McCreary – are composed of ever-moving grains of sand and stone, vibrating and shifting as if on the skin of some drum.

Galadriel, the centre-piece of this endeavour, was something of an untouchable ethereal goddess in Jackson’s Lord of the Rings trilogy and played with fitting beauty by Cate Blanchett. Here, she’s no less striking (if a little less glowy) but in the form of Welsh actor Morfydd Clark she’s far more proactive and down to (Middle) earth, a commanding warrior who climbs cliffs, takes on orcs and trolls and goes where even some other fellow elves fear to tread. She’s also one uncomfortable in following orders that don’t serve her own sense of mission – anything that gets in the way of locating  the presumed-dead dark lord Sauron is put aside – including the favours of her king and fellow warriors. Some will mumble about the female character being the de facto lead (and several of the key ensemble of characters being female) and a few reviews appear to even take offence at the inclusion of black faces among the ensemble – because as Sir Lenny henry notes, a small number of fand appear to have “…no trouble believing in a dragon, but they do have trouble believing … a black person could be a hobbit or an elf..”   but they’ll have to drag their knuckles somewhere else as the bottom line is in the performances and that aspect works just fine.

A multitude of voices and clipped tones that linger on consonants and vowels like the most eager Shakespearian performers, spend a considerable amount of the running time laying down layers of exposition and the scene-setting (taking in different areas and characters across Tolkien’s lands) sometimes hangs heavier than hoped, feeling more like a fantastical travelogue or alternate history lesson than the first chapter of a new (or very old) story.  Morfydd Clark consistently states her intentions through precise lips and clenched teeth as if she’s treading hallowed boards, the dwarves clearly have a comedic Celtic lineage of some sort and plenty of townsfolk come from somewhere oop in the Dales (I guess every world has its North).

The cast is expansive and probably too big to name individually but the likes of  Robert Aramayo  as a younger Elrond on his own peace-making mission, Markella Kavenagh as Nori Brandyfoot (a Harfoot – a predecessor of the race who will become Hobbits), Owain Arthur’s proud dwarf Prince Durin IV and Sir Lenny Henry as Harfoot elder Sadoc Burrows make an impression. There’s also a smoldering chemistry between Elf Arondir (Ismael Cruz Córdova) and human Bronwyn (Nazanin Boniadi) in the Southlands which feels like it should have Kate Bush and Wuthering Heights wafting in on the breeze.

By the end of the first two episodes we have the appearance of murderous Orcs from beneath floorboards and a mysterious star-fall that brings with it an unexpected visitor with few answers as to its/his origin. (This almost feels like a science-fiction aspect, rather than fantasy, but there are myriad mythological possibilities in Tolkien’s works, so we’ll see what’s to come). The set-up isn’t complete but it has plenty of moving parts, not all moving in unison, but all generating something that sparks.

The Rings of Power isn’t perfect; there’s times when the obvious diligence to cartography and blueprinting proves less organic than it should and there’s a feeling that that the first two episodes are all about finding balance – something it still strives for by the time we’re done. It’s a result that will likely cause delight and consternation in equal measure as the show picks its way through the existing details of Tolkien’s manuscripts, avoids the elements to which it doesn’t have the rights and creates some new characters of its own. However delicately and spry that meander appears to be, there’s obvious potential and a solid baseline (and legacy) from which to start again, something Amazon will be counting on considering their record-breaking investment. Despite some performances feeling more suited to Stratford Upon Avon than the Shire and with spectacle sometimes being relied upon to dazzle and distract, there’s much here to please and applaud and more than enough to likely have you coming back for more… 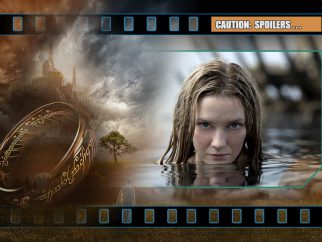