Stallone's latest, arriving on Amazon Prime, is a formula but engaging look at the post-modern superhero...

On a fateful night decades ago the hero of Granite City, the superhero known as Samaritan faced his twin brother, the rabble-rouser known as Nemesis in a final showdown and both apparently perished in a power-station explosion. Years later both figures have something of a mythic following – Samaritan representing the heroic heart of the city and Nemesis seen by others as a a guy who was a villain or just the tough voice of a discontented populace.

But the crime-rate is rising once again and a local gangland thug called Cyrus (Game of Thrones’ Pilou Asbæk) unearths some of the artifacts found in the power-station wreckage – including Nemesis’ mask and staff of power.  A young boy called Sam Cleary (Javon ‘Walla’ Warton) is caught between staying on the right side of the law and helping his single mother afford the rent for their shabby apartment. But even as Sam feels pulled towards being a petty thief/runner for Cyrus, he becomes convinced that one of his neighbours, a garbage-man named Joe, is secretly Samaritan.

It’s amazing to think that in his long career as an action star, Stallone has never really played a full-on superhero. Sure, some of the roles have arguably broken the laws of physics and included more than their fair share of fantastical, belief-suspending elements, but he’s never played an outright costumed vigilante. The nearest might be anti-hero Judge Dredd, but the 2000AD comic character wasn’t really a vigilante (quite the opposite, in fact) and possessed no super-powers beyond his devotion to the law and his Eastwood-esque chin.

Samaritan, out now through Amazon Prime, does not remotely reinvent the post-modern superhero wheel, but nor does it seek to. It relies, like many before it, on a well-worn mix of secret identities, mythic role models and the innate triumph of the underdog. However what it does do is stride confidently into that familiar arena and positively embraces all those elements with gusto, delivering on everything said on the tin if nothing more. This isn’t Gotham or Metropolis… Granite City is definitely a recognisable, contemporary American inner-city, with a dissatisfied populace whose grumbles and foibles ring true – poverty, frustration and problems that can’t be solved by a police force overburdened by the troubles themselves. Crime – petty and serious – can be a day to day way of life merely to keep a roof over your head. Everyone is ‘just getting by’

In that spirit, Stallone approaches the Samaritan material straight-on, playing it out not as a light-hearted drama or even out-and-out comedy, but as street-wise fable. The action icon himself is grizzled and weathered but here his face and demeanour are a fair distance from the almost contorted extremes of The Expendables. For most of the story he’s just like the city, keeping his head down and ploughing forward as a civilian watching the clock and trying not to think too much about yesterday or tomorrow.

Javon ‘Walla’ Warton is good as Sam, making him less an ‘innocent’ as a young boy forced to make decisions beyond his years and caught up in an impossible environment where there’s no completely ‘right’ decisions to be made every day. Pilou Asbæk makes a good antagonist, though some of the early promise devolves into sneering villain by the time we’re done. At least at the start, he cuts an imposing figure, one who’s gangland philosophy appears just as much built on frustration as anyone else’s. His own vision of previous events paints Samaritan as a naive tool of the oppressor and Nemesis as the real representative of the streets. It’s not clear what Cyrus’ own plan is, except to claim the Nemesis identity to stir everyone into action against the powers-that-be. Unfortunately, the film requires a climax that harkens back to the original Samaritan / Nemesis confrontation and Cyrus becomes less of a compromised ‘man of the people’ and simply the twisted bad guy conforming to stereotype and who needs to be taken down.

Some of the supporting players, such as Sophia Tatum as Sil, Cyrus’ right-hand enforcer, don’t get the development they deserve. Sil is supposed to have a history a little like Sam’s – before she was taken in by Cyrus who gave her meaningless and askew life a purpose or sorts – or at least to serve as an indicator of a road taken and bad decisions made that could yet befall Sam. But she too is ultimately wasted as collateral damage and one suspects there’s more of the character on the cutting room floor.

Story-wise, much of it plays to all the expected beats, like an 80/90s script tweaked for a more modern audience. There are a few twists along the way – some obvious, some less so – and my wife was even a few seconds ahead of me in predicting at least one of the main zigs-not-zags. But few will ultimately surprise. Samaritan, though well-funded, doesn’t have a fraction of the MCU budget, but what it does possess it uses well enough and the result is one of Stallone’s better recent outings and a diverting-enough 90 minutes. There’s a better version of it to be made/edited, but go in with reasonable expectations and though this isn’t remotely Shakespeare or Oscar-baiting drama, it does deliver a solid contemporary romp, feeling like a Mark Millar outing, except with traditional heart rather than post-modern cynicism… 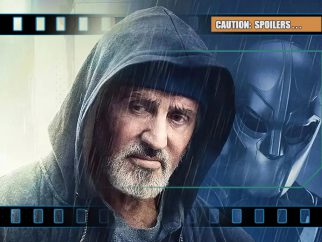 House of the Dragon: Dynasty and (Dis)Loyalty under Fire…