As Jen heads into court, she's ready to right some wrongs, but will Wong be right there?

Jen doesn’t have time to worry about the toxic parts of social media as she still has to prep for Emil Blonsky’s appeal hearing. That’s going to be difficult given there’s video footage of him cage-fighting rather than being safely incarcerated. Perhaps Wong can put it all to rights?

Elsewhere, obnoxious lawyer Dennis Bukowski thought he was dating Megan thee Stallion, but it turns out to be a horse of a different colour and Asgardian pedigree. Can Jen and Pug find a way to make his case for damages?

Right from the start of this week’s episode, the show takes a few well-earned shots at the toxic end of fandom, noting part of social-media’s reaction to Jen’s outing – apparently some based on real ones about the show. Some bemoan a female derivative of a successful character and there’s a sly reference to Jen’s origins being faked and actually being part of a mob-hit gone wrong (obviously a note to the comics’ origin). But if the first two episodes of Marvel‘s self-aware superhero dramedy concentrated on the She-Hulk part of the tile, then the third is very much turning its focus to the qualifier: Attorney at Law. Jen’s first case, for which they’ve been laying much of the groundwork, is defending Emil Blonsky (Tim Roth) and given various conflicts of interest, her defense is a somewhat messy affair. Not least because there’s footage of the Abomination in a distant cage-fight when he should have still been in jail. That is unlikely to sit well with the parole board.

The episode – entitled The People vs. Emil Blonsky – ties into the events elsewhere in the MCU, though it still requires some squinting to make it all work.  Wong makes an appearance after Jen is confronted by the cage-fight recording (an event that the audience had already seen in Shang-Chi) and the Sorcerer Supreme admits he broke him out – against Blonsky’s will – to engage in some hand-to-hand combat to test his own mettle. It’s an effective if little inelegant way of explaining continuity. To that extent Wong’s casual mention of the Mirror Dimension and how messy it can be to wipe an entire world’s memories also tie it to Doctor Strange in the Multiverse of Madness and Spider-man: No Way Home,. Essentially, She-Hulk is becoming the Sticky-Note hub of the MCU.

Definitely channeling Ally McBeal type tones, Jen manages to parlay Blonsky’s situation into a plea-deal of sorts where he’ll be allowed to go free (and rejoin his ‘hareem’ of soul-mates) and also help with another case (one for which she’s just serving as a witness) involves snarky competitor Dennis Bukowski (Drew Matthews) suing a woman he was dating. He thought she was pop songstrel Megan Thee Stallion but it turns out it was just an Asgardian Elf with shape-shifting powers. (Isn’t that always the way?) Jess’s fellow arbiter Augustus ‘Pug’ Pugliese (Josh Segarra) may despise Bokowski’s casual arrogance and misogyny but has the unenviable job of representing him in court – with the prosecution saying he should have known the real Megan wouldn’t have looked at him twice. But Pug and Jen come up with using the perfect stance: that Bukoswki is too stupid and arrogant to have seen through the deception. It’s really just an excuse to have the real Megan Thee Stallion make a cameo appearance and ultimately sign on as one of Jen’s clients… plus there’s some twerking lessons at the end (And to anyone who thinks that was inappropriate silliness, they really need to read the John Byrne comics who regularly lampooned such behaviour – including having a naked She-Hulk skip for several pages).

Essentially, this episode is just a series of legal punchlines and easter-egg moments – with even Jen commenting to camera that the cameos are lining up –  but it continues to be fun.  Excepting the ‘Wrecking Crew’ ending (where the street-level villains try to take a sample of Jen’s blood and get the proverbial beaten out of them for their back-alley efforts) the show still has a clean-slate of where future episodes can go… something unusual for a Marvel / Disney+ show that would usually have started building up to something significant as an over-all story device by this point. The Wrecking Crew will have a pay-off, but it’s not clear if that’s the end of the Blonsky arc. We’ve still got some other significant cameos to feature including a version of Daredevil / Matt Murdock. 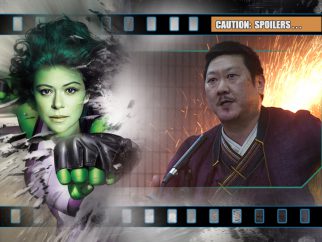