Veteran actor Anthony Edwards plays a researcher whose experiments may be compromised by an unwelcome visitor...

Dr. Charles Everett has found the perfect area to study the ‘homo mortis’, a slice of land carved off and separated by a deep chasm. It’s trapped the undead walkers in that area and makes it difficult for anyone else to make it there.  But his research-gathering is disturbed when a stranger appears on the edge of the area and Everett is forced to decide whether to let events take their course or to save her. Reluctantly, he does the latter but has no interest in her staying around to interfere with his studies.

However, the young girl – Kim – is looking for a new place for her people to settle and Everett is horrified that all his years of work may be for nothing.

But then, his data suggests that the undead may be migrating on a route that will take them directly through Kim’s camp. What will he do?

After two rather light and frothy entries and then one almost nihilistic chapter in its anthology spin-off show, Tales of the Walking Dead attempts something of a middle-ground, though despite some banter and smiles, its message is pretty bleak and definitely not designed to leave you with any sense of joy.

You could be forgiven for not recognising Anthony Edwards in the marketing material or even the pre-credits sequence itself. This is a far more rough and ready visage for the veteran actor (best known for the likes of Top Gun and ER) with a wilder look in the eyes and a scraggly beard sprawled across half his face.

There’s an interesting dilemma at work. Edwards’ scientist, Dr. Charles Everett, once part of a committed team but now living alone, almost cherishes his isolated landscape. He’s smart enough to largely avoid the perils of the roaming undead and also to have worked out a way to track their behaviour. Devoid of any other human contact, the undead have behaved in a more uncorrupted, uninfluenced way and given Everett the opportunity to see how they ‘migrate’ with some interesting results. So when a very ‘live’ stranger called Amy invades his ‘testing ground’ Everett is inclined to get rid of her as soon as possible, less she upset the careful balance he’s monitoring. He comes across as grumpy and possibly obsessed, but as we get to know him more, it’s likely the viewer will begin to see more of the world through his eyes… if not agreeing with him then at least understanding his points of view as pragmatic. He despises the head-hunters/traders who decapitate his potential specimens not for survival but just for the joy of it and is happy to let other communities exist as long as they don’t trespass into his grounds – protected as they are by a chasm that splits the land. More cynically, he’s more than inclined to let any such trespassers die and even watch as it happens for his study… something he learned from the ‘use me as a test-subject’ plea from a fellow scientist. We discover that he’s not without emotion, but simply tired of humanity and determined to make his own life’s work, impartial though it may be, mean something.

Amy (Poppy Liu) is played as something of an enigma. At times she’s merely the innocent stray looking for a home for her people, at others far more manipulative and Everett’s suspicions that she may be part of the head-hunting traders is not voiced without good reason. Liu – who identifies as non-binary (she/her) – has had an eclectic career and brings some welcome depth to Amy, though for the most part (and the core of the episode) she’s simply there as the opposing voice to challenge Everett’s stance. Her spoken opinions could be equally valid, depending on your own point of view.  It’s interesting that the character is somewhat disabled (missing her lower left arm) and equipped with a spike instead. Though that aspect is not a large part of the story and goes largely unmentioned, one does wonder if an attempt was made to get an actor from the disabled community first – one of the occasions where an under-represented section of the industry might have had a chance to shine?

Back to the dual-name title format of the first two episodes, Amy/Dr. Everett has a lot to say but little to conclude. There are musings on morality, human-nature and what will happen if and when the undead remove all humans and if that – in a paradox – would mean their own downfall, which are all interesting enough. The opening and interludes with an Everett-narrated documentary more suitable for NatGeo sets the scene but the actual episode tends to be more talky than action, fitting in to the world we know in the series all too well, but its isolationist-nature more of a thesis on the post-apocalyptic environment and human responses rather than a tense, dramatic entry of the usual tone. The last act forces the duo into action, though unlike previous chapters the result is not any kind of real reconciliation.

In its own way as bleak as any Walking Dead entry, it’s a decent addition to the anthology even if it doesn’t linger long after the watching of it… 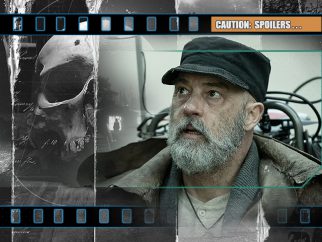