It's hard to go beyond the rails set down by the Predator franchise, but some notable authors give their visions...

The innate problem with creating an anthology of stories around the Predator race is that the franchise itself has mostly had one story to tell, hunter/hunted, which it has sought to do over and over again to varying degrees of success. The film franchise (that began with the famous Schwarzenegger vehicle back in 1987) earned sequels that ultimately failed to stray far from some basic, linear variation of that ‘alien game-hunter’ remit.  Having more in common with the rise/repeat horror franchises of Jason, Freddy and Michael, the task has been to change the scenery and faces rather than the story. Even the Alien franchise with its messy, over-reverent, over-complicated, post-post-modern Prometheus and Covenant at least tried something different, deeply flawed and indulgent though they might have been.

That’s not to say that the Predator franchise doesn’t deserve its cult status – there’s something genuinely iconic and primal about the creature and its place and mission-statement in the astral-antagonist firmament, and I can count myself amongst its fans. But the skill of keeping it interesting is a deceptively difficult one, often championed by stylistic choices in the scenery and casting. Prey, this year’s solid cat-and-mouse outing, benefitted from both Dan Trachtenberg’s choices in the director’s chair and the sheer distance from the original from which it drew its basic and most noticeable strengths, streamlined back to its source and primed like an arrow straining again to fly straight.  However, it’s also easy to get wrong – Shane Black’s THE Predator ironically missed most of its reverential targets in 2018). Screen-wise, I’m more than happy with the suggested ideas of placing Predators in different time-periods and letting the setting dictate the action, feudal Japan being a popular choice, but a string of stories en masse on the printed page? That’s a tricker proposition.

The entries within the pages of Predator: Eyes of the Demon (out now from Titan Books) are a mixed bag, likely to appeal to different readers in different ways – no bad thing in theory. But take away the differing on-screen visual choices of the screen in favour of words on a page and the problem of finding something ‘new’ can be compounded, each entry read in the voice of the reader needs something to differentiate it from what precedes it and follows, not easy when – by their nature – they can’t.  Some of the writers seek to repeat the formula of the basic hunt – different planets, different future time-frames, similar outcomes… and others take time to overlay and explore the Predator society and motivations. That in itself can be another minefield. I remember losing interest in The X-Files when they conveniently introduced alien bounty-hunters, wondering if alien therapists, alien shop-keepers and alien online-influencers would soon be following in unlikely, Golgafrinchan proportions. There is the tendency, even amongst the best writers, to make alien civilisations merely a tactile reflection of our own and thus make them essentially, well… less alien. Personally, I’m for keeping them primal and ‘other’ and exploring any parallels in subtextual and less overt ways. Similarities should be in the final destination not the journey, less they become the solar system more travelled.

Tim Beddon gets up close and personal with a one-on-one tale on a far-away colony where a survivor a previous Predator encounter decides to make a final stand. Jonathan Maberry and The Fix is In get closer to the feel of the original ‘close-knit soldier team under fire’ tone of the original film. On a purely subjective level, I had less interest in an ‘original film epilogue’ story called Aftermath (penned by Bryan Thomas Schmidt who also edited the collection) than some might, but any excuse to catch up with ‘Dutch’ is fine. The shorter but more personal Lion of the Himalayas by Ammar Habib (and which brings an interesting perspective of another human culture encountering a Predator) is a nicely considered highlight.

The third and far more tricky option is to thread the needle: to keep the audience’s interest by placing a Predator into a story in which it arguably has no place and watch what happens, wrong-footing the reader and making them sit up and take notice because the outcome isn’t so obvious. Peter Briggs, who wrote the first Hellboy movie with Guillermo del Toro (and whose idea for an Aliens Vs Predator movie is generally accepted as better than the films that actually made it to screen) brings us Little Miss Nightmare and balances the callings well – placing a Predator in the mix of a concept that echoes the Mission Impossibles and Jason Bourne format of an international terrorist hunt. What chaos, he wonders, would ensue if human hunter and human pursuer were usurped by an arguably superior alien third party, forced to bring their A-game against that wild card. The Predator’s nuanced-monitoring and understanding of the contemporary internet aside, it feels like an actual movie pitch, with the entry here only a fraction of the wider story that could be told. Briggs isn’t interested in repeating the norm and knows pacing (ever-decreasing lengths of scenes designed to up the urgency) and this is one of the few entries here that ultimately feels fresher and shorter than it could be.

There’s also unexpected whimsy in the ‘out-of-place’ situation, be it dark and bloody, in Robert Greenberger’s Field Trip placing of a Predator hunt coming across a group of  ren-fair/battle-re-enactors, the humans initially ill-equipped to deal with their attackers but giving it their all and the admittedly unlikely, but poignant, aspect to its climax.

Predator: Eyes of the Demon is a welcome release for Predator fans, marking the 35th anniversary of the first film. It’s perhaps a little less essential for the casual audience and its anthology-nature means it is not as easy or as tempting to digest in one sitting. But it proves that’s there’s life in the hunt yet and hopefully we’ll have more Predators in our future…

Predator: Eyes of the Demon is out now from Titan Books… 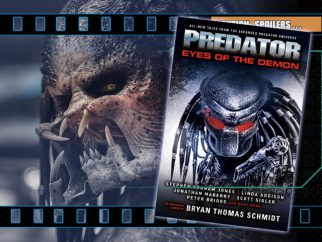