'Prey' goes back to basics and delivers a streamlined pursuit that plays to the franchise's core concept...

Naru is an accomplished tracker and is becoming more and more adept at skills that could serve her Comanche tribe well. However, the elders – even her supportive brother – feel that a young woman’s place is not in the heat of battle nor the in danger of hunting large animals. When the tribe’s food sources are endangered by what is presumed to be a mountain-lion, Naru’s tracking skills are useful but she is kept at a distance and some of her fellow tribesmen pour disdain on her desire to be part of the hunt and her insistence that there may be more than one dangerous creature in the immediate vicinity.

But when she observes a massive bear taken down by a humanoid form that appears and disappears from the very air itself,  she begins to understand that there is now danger on all sides: from the animals of the forest, from the French settlers that push ever forward… and now from some creature that arrived after lightning in the sky with weapons that can cut a man in half.

There is a new hunt on, one with different rules of honour she cannot yet fully understand, but Naru is going to learn quickly that you can be both predator and prey…

In an age where post-production gloss and widescreen spectacle are everything, where better has to be bigger / more expensive and where CGI, in particular, is often the set-piece crutch on which even the best entries can rest, the latest chapter in the Predator franchise eschews many of the expected bells and whistles and instead goes back to basics. Prey‘s strategy is knowing when less is more and the result is a frontier movie that doesn’t push new any boundaries but stands tall and assured on its foundational elements, perhaps more so than many of the previous sequels and side-glances thus far.  Of course, the original Predator film (released in 1987) is a thing of legend, a rewatchable vehicle for Arnold Schwarzenegger with an iconic cinematic nemesis and the unlimited hardware and strut of a star and director (John McTiernan) both in their comfort zone. Thirty-five years and a cluster of often inferior beasts later (plus a couple of worthy fan-made efforts, also in historical settings)  Prey notably reduces the star-power and shifts the environment but keeps the basic conceit and the premise.

With all due respect to the streaming platform, it’s initially baffling that Prey is debuting on Hulu and not in multiplexes. Savvy marketing has stoked fan interest but it’s also entirely possible you weren’t even aware of the movie until recently. However if you take into account the fact that there’s no A-List actors, that it’s technically a period-piece, that the Predator franchise itself hasn’t exactly been centre-frame  and that the leading character is a young woman (which shouldn’t make a difference but likely still does in some financiers’ minds) it becomes more clear as to why some of the powers-that-be may have been hesitant and wanting to hedge their bets.

Amber Midthunder – who has been slowly building her résumé for the last decade –  plays Naru and holds the screen throughout, anchoring the action as an underdog determined to rise. A Native American take on Mulan, Naru is smart, adept, good at what she does but often over-looked and held at a distance because of her gender. When she wants to go along on a hunt that she’s technically more than qualified to be part of, one of her tribe notes there’s no point her coming because they won’t be away long enough to need anyone to cook. Ouch. Her brother Taabe (Dakota Beavers) is the tribe’s golden boy and supports his sibling as much as he can, but though aware of her talents and happy to promote them, he’s protective, careful and genuinely not sure she’s ready for the kind of kühtaamia trial where your quarry may end up hunting you. It turns out she is.

Despite the organic feel, this isn’t some pseudo-low-tech outing. There’s solid VFX throughout, but far less overt than you might expect and they punctuate, decorate and inform the action rather than dictate it. Touchstones such as the Predator’s cloaking device / semi-invisibility, the heat-vision POV and the interloper’s body-armour are requisite to the tale, but even though they are familiar, they are no more important than a sword or shield… the tension is in their use and delivery.  The actual predator has a slight redesign in the facial features, but only in so much that VFX offer a greater flexibility in distortion than the original prosthetics and there’s no wholesale reinvention of the monster that made such an original impact. It’s still humanoid in movement but creepy enough to be something ‘other’.

There’s actually an argument that you could have stripped the meat of Prey back even further. (Though it would likely prove impossible to market it that way, Prey would benefit from audiences going in without knowing its franchise connections – with a few tweaks and editing it could have been pitched as a frontier period-piece on the subject of survival and then pivoted to the alien factor catching everyone off-guard). Given the straight-forward nature of the hunter/hunted tale and the importance of visuals over actual spoken language, it would have been entirely possible to tell most of the film’s story without a word of English. (My understanding is that there is actually an option to view the film fully dubbed into authentic Comanche, which might have made it even more interesting and timeless). One wonders if there would have been any way to promote the film without giving away the Predator lineage, with a few tweaks the film could have quite stunningly provided a bait-and-switch to an audience expecting a more natural drama.

The idea of an organic food-chain or natural hierarchy runs through the film. In an early sequence, a spider is eaten by a mouse, the mouse becomes dinner for a snake and then the snake becomes a minor snack for our alien guest. Yes, it’s on the nose as metaphor, but it’s also the spinal cord of the tale – that if you’re capable of being hunted, something will likely be capable of hunting you. The concept reaches into the human side of things with Naru and her tribe also facing the threat of French mercenaries and settlers who see them as inferior stock – only to have their understanding of social anthropology delivered by extraterrestrial steel and native knowhow. At one point Naru works out that the creature, however ruthless and cold it may be, won’t simply eviscerate helpless, chained bait because that provides no challenge – it’s there to hunt in efficient and primal ways, but not to aimlessly slaughter. It’s honour-system might be skewed (it will use its technology to outwit its adversaries rather than a totally ‘fair’ fight) but it has an up-close-and-personal code it works by. In our modern era where garish rich folk with big guns still think posing with photogenic carcasses is the equivalent of actual hunting , the film wisely paints the Predator as the antagonist and adversary of the piece, but not the villain.

Despite wide-open vistas and majestic plains, almost visual echoes of the Disney films that explored the wilderness and spotlighted the animals that occupied the frontiers, this is a R-Rated, mature audiences tale and not for the squeamish. Director Dan Trachtenberg (10 Cloverfield Lane, The Boys) has been building his reputation and here provides a solid grasp of both the quiet and more action-filled moments, keeping characters key to the events around them. There’s considerable bloodshed here, but that being said – and perhaps reflecting the notion of what matters in a true ‘hunt’ – the film celebrates the tension of the chase, the proving of technique and the matching of primal skills and it doesn’t revel in the carnage – cutting away in certain scenes to let you fill in the blanks where other directors might well have lingered merely for shock value.

Apparently, there are anachronisms. Despite capturing the feel of the era in earthy, damp, desperate tones, one expert noted that the steel traps used in the film weren’t actually used in the territories until decades later. If that’s the kind of thing that’ll bother you, so be it. However, on the flipside, the cinematography is good, the atmosphere it generates holds the attention and those familiar with the more minutiae elements of the Predator legacy may rejoice in spotting  a few name-check artifacts from the franchise. Certain phrases echo down the years between the films and look closely enough at a certain pistol’s hilt towards the end and its owner’s engraved name (Raphael Adolini – 1715) will raise a smile if you’ve seen Predator 2 or read certain comic tie-ins. There’s no post-credits scene,but watch the paintings around the credits and you get a clue where another prequel-sequel could go.

Is Prey great? Perhaps that’s going too far. Is it good enough? Certainly, its confidence and delivery in marking out its territorial focus ultimately delivers a definitive uptick in the fortunes of a squandered mythology. In efficiently downsizing, it uplifts. 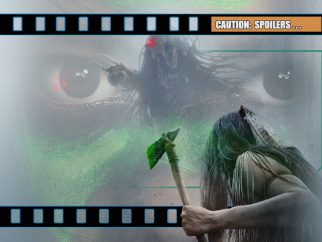