The love of money might be the root of all Evil, but misfortune seems to be its stocks-in-trade...

Kristen, Ben and David are asked to investigate a man who believes he’s been stalked by a demon ever since some of the shares he held have produced unfeasibly large dividends – and it turns out that he’s not the first to be seemingly blessed with great fortune and then cursed by consequences.

Meanwhile Grace feels under pressure from the Church to help them connect important ecumenical prophecies. Maybe what she needs is some downtime with the Bouchard family to help her recharge after her recent captivity. Unfortunately for others her insight might prove an inconvenience and so Leland decides that he must take matters into his own, murderous hands…

Though Ben equates Evil’s case-of-the-week to a Japanese B-film plot, it’s less like The Ring and more akin to cult hit It Follows. Anyone who profits from the stock shares is menaced by a dark figure following them ever closer until they either give up everything they’ve bought with the stock-shares or have been able to pass the trading tip along… or die!!!!

In what’s becoming a regular occurence, the elements of the mysterious case-of-the-week don’t really have a logical explanation or conclusion, but they do form a grater entrance into wider questions of faith and perception. Ben’s efforts to come up with scientific causes with his sister and being flummoxed, exasperated and then genuinely unnerved was fun to watch.

In this case the series does make good use of the latest dilemma on a variety of levels. On one hand the very concept works as a thriller-threat, but Evil also takes the opportunity to introduce genuine body-horror again (what happens if you paid for plastic surgery with your winnings?) and there’s some humour and satisfaction when Kristen comes up with a smart and satisfyingly dark way to deal with the supernatural rule of consequences.

Events in the Bouchard household are always a lot of fun and this week’s episode brings a whole swathe of players crashing together for Kristen’s belated birthday bash, with Grace (Li Jun Li) at the centre of it all. Watching the hyped-out kids interact with Grace is great, with both sides getting something positive from the more care-free moments… She tells Kristen that Lexis has difficulties ahead but will be fine with Kristen’s support and tells the kids that father Andy will be back next week (though why does it all sound less reassuring as it should?). The interaction with Sheryl is full of foreboding (though Grace seems to pre-emptively forgive her for what’s to come). We’ve also got Grace’s holy protective detail who couldn’t look less comfortable if they tried holding blow-up animals. Result!

Psychastrist Kurt seems happy with the trade-off of symbolically (or literally) selling his soul for literary inspiration but even Kristen seems to notice his activity and is a little worried by his demeanour. Kristen sees the gathered typed pages as little more than a scattering of random letters, though it’s her crafty kids who read (and love) the mirror writing later in the ream. I am a little confused, though. Wasn’t Kurt writing a thesis on spirituality vs science, so when did he switch to writing Grimm Fairy tales about murdering off-spring?

Genuine tension builds in the dying moments of the episode as Leland, alerted by Sheryl, decides that he has no choice but to actively deal with Grace personally. Instead of getting someone else to do his dirty work, it’s actually up to him alone to walk maniacally and menancingly up the stairs with Hitchcockian cockiness carrying a large dagger with which kill the recently-freed prophet. Grace herself, we’ve realised, appears to have some idea of the danger she’ll be in and her apparent fate at the hands of Leland. As an audience we’re left in the predicament of impotence, willing actions to be different as they continue but incapable of changing the outcome ourselves. Those actively praying for one of the show’s classic bait-and-switches might be pleased when Grace appears to live, but as always with the show, there’s a cost. Grace’s survival appears to come at the expense of regular supporting player Boris McGiver’s Monsignor Matthew Korecki, who intercedes in the nick of time and ends up getting the fatal blow as he grapples with Leland instead. In a touching reference back to the appearance of Wallace Shawn’s priest in the season opener, Korecki’s last words as he bleeds out in Grace’s arms are an acceptance of the love that hadn’t yet dare speak its name.

There’s one episode to go and a lot of plates still spinning like Linda Blair’s head at an Exorcism, so there’s no chance that most of them will have any real conclusion next week.  But if Kristen can continue being the smartest and sexiest pragmatist on television, if David can continue to beat the church at its own games and if Ben can simply continue being Magnificent, then we’ll keep watching… 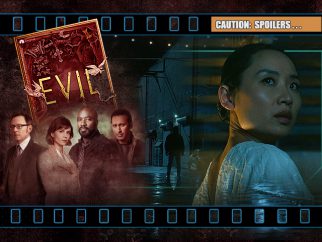