As Hale and William both initiate their endgame gambits, can anyone survive even a best-case scenario?

With time growing short, Bernard, Frankie, Maeve and Stubbs head into the city and towards the Tower, hoping to find Caleb and stop Hale once and for all. However Bernard may not have been truthful with his friends. Despite the high stakes, Bernard’s best predicted version of events will still end in almost complete failure and death for everyone . His strategy is in the journey not the destination, but will any of that matter if all that is left is rubble?

As Hale plans to ascend and leave her human form behind her, William begins to question his own existence and starts to initiate a scorched earth policy of his own.

And as Dolores/Christina makes her way to the Tower with Teddy, what use is the power of a God if someone else has taken control?

There’s been an expectation but no firm word yet on a fifth season renewal for Westworld – and given the current trials and tribulations, cuts and cancellations across the board at Warners (owners of HBO) as they completely restructure their priorities and slash costs, some fans may well be wondering if next week’s finale might be the actual series finale rather than just the swansong of the fourth run. Indeed, watching Metanoia and the way it both dovetails its many elaborate threads and ruthlessly cuts a bloody swathe through its main characters, it does all feel like the end is not so much nigh as already here and taking names.

The direct confrontation between Hale and Maeve has been a long time circling back. Both actors have a track-record in deftly handling both the emotional and physical challenges on screen. Thompson was most recently seen as Valkyrie in the MCU and Newton’s career since Flirting has included the likes of Mission Impossible, Rogue, Crash and Line of Duty. Their up-close-and-personal, hand-to-hand combat raises the stakes, neither giving an inch with both characters putting their all into what they know will dictate the future for their species and the planet. Brief though it is, most fans will have been on the edge of the seat wondering who would come out on top. The confrontation is cut short by the arrival of William (back in his Man-in-Black western gear that so closely resembles his movie counterpoint Yul Brynner) who mercilessly shoots Maeve through the head and then, establishing that his allegiances have changed to self-preservation, follows up by also quickly executing his ‘boss’ Hale in similar fashion. Harris has been more enigmatic support this season, his grizzled features and pale eyes taking in everything going on but working best in his ‘more ‘still’ moments. He’s been the philosophical pivot of the season – cynical to the max but striving, in vain, to understand what makes humans so… annoying. His speech this week about the fact that aspirational civilisations come and go but it’s always the cockroaches that actually survive is sublimely cynical but very much on point.  Here, with the series also feeling like it’s coming back around to its original themes, he moves back centre-stage, clearing the board of many of our favourite characters in nihilistic fashion. It looks like Bernard is aware the moment is coming and may have prepared accordingly, but it apparently doesn’t lead to his survival, his core-processes shutting down as he bleeds out, reaching the end of his foresight into events.

As the characters and threads converge, we finally get the Caleb / Frankie reunion we’ve wanted, the first time the actual actors will have shared a scene, though for a brief second it looked as if disbelief and misunderstanding might cause a tragedy. Despite this being a variation of the original Caleb – and Frankie having missed almost two decades with him – it’s a powerful moment to which the show’s twisty timelines have been building and the continuation of which will likely form a major part of the finale. Stubbs (Luke Hemsworth) provides some moments of tensin-breaking comic relief. He is told by Bernard that he won’t make it out alive – but he actually survives the episode, outliving Bernard’s time-span, so one has to question how much of the ‘doomed’ speech from his friend is actual knowledge and how much is just motivational watch-your-back pep-talk.

Christine/Dolores is just getting the hang of her God-like status when William’s scorched earth override sends the city into chaos with everyone fighting each other and no way for ‘Cholores’ to stop it. Rachel Evan Wood conveys the confused panic of someone whose world is unravelling. Teddy’s description of the original Dolores as a sweet, innocent that a cruel world changed is probably true but it doesn’t help her here. When Teddy reveals a further truth that no-one is reacting to her because she’s not really there, it’s enough to break her and the viewer. Hopefully there will be some clarity on that in the finale… but maybe not.

The only question here – and the wholesale double-sided irony is obvious – is how much any of this matters if things aren’t ‘real’? In the moment it’s all top-notch emotional stuff, emoted by actors at the top of their game and given able room to play. But Westworld has proven time and time again that ‘death’ doesn’t have much of a dominion over its ensemble and therefore it alters the import of such long-game stakes. Even the most die-hard fan of the show might actually be questioning exactly what fate the characters are enduring even as we watch them ‘die’. Maeve, Hale, Bernard and the human William appear deader than virtual Norwegian parrots, but have they truly, completely ‘ceased to be’ or will we just pivot onwards… and what right-minded viewer would bet against them all turning up in the finale as yet other iterations of themselves somewhere inside the Sublime matrix?

Westworld continues to be the most ambitious genre show in years, its budget, narratives, style and production a tribute to all involved… and, yes, despite its twists and turns, this season has been the most accessible in years – as long as you’ve already been a faithful viewer. (Newcomers… well, good luck). But the season finale has a lot to control, alter and delete. If this is the end, one hopes it has been prepared for and if it’s not… well, we likely have another eighteen months for another reset… 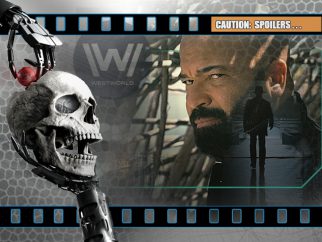