The Sandman may have the title, but its a dreamy supporting cast that hold the attention in Netflix's adaptation...

The start of the 20th Century and as the creature known as The Sandman/Dream/Morpheus is about to send an escaped nightmare back to the land of Dreaming, another all-too-mortal and ruthless man, scarred by the death if his first-born son and attempting capture ‘Death’… instead imprisons Dream. It will be an confinement that will last over a century and sets in motion a series of events that will affect more than one world.

But even when Dream escapes and goes in search of the relics that channel his powers, the damage is already done. The Dreaming is crumbling, the waking world is infested with those who should not be there and Dream and his siblings find themselves in both camaraderie and conflict. Dream must challenge those who seek to keep him from his legacy but also face a world and realm that has move don without him.

And elsewhere, a man called John Dee looks for his ‘truth’, the ‘Corinthian’ carves his way through the darkness beyond eyes and a young girl named Rose finds herself in the middle of opposing magical forces that might both want to see her dead…

Those familiar with the classic Vertigo/DC-published source material will be watching as Netflix‘s  The Sandman twist its way through and between the existing works – sometimes emulating, sometimes diverting – and scrutinising its long but much anticipated journey to the screen.  Author Neil Gaiman has become a byline for quirky, knowing, fantastical and multi-layered creations and set a discerning benchmark of quality first in thought-provoking comics, then novels, multimedia and television. As far back as 1996, an adaptation of  Neverwhere, his surreal journey through the underworld of London, appeared on BBC schedules but still felt like a grand idea with an insufficient budget.  Over two decades later  Good Omens (an adaptation of the tome he penned with the late Terry Pratchett) solidified the idea that technology was finally ready to help render his imagination more readily onto the screen.  The comics, originally published by DC and its mature imprint Vertigo between 1989 and 1996, were a cultural shift and collectively made The New York Times Best Seller list, a rare achievement, placing it with the likes of Maus, Watchmen and The Dark Knight Returns.  For much of those to decades following, efforts  were made by key and respected film-makers to bring The Sandman to one screen or another, but all floundered. So, the final 2022 arrival of the beloved The Sandman is a genuine big deal.

But if you come in somewhat colder and as a more casual viewer less familiar with its origins, lineage and legacy, this new adaptation (following both the acclaimed comics and audio series) might also seem… well, just a little late to a party that it could once have hosted. Financiers and broadcasters have since recognised the potential of mature magical mystery tours…and so fantastical and well-financed productions such as Carnival Row, His Dark Materials and The Nevers have been busy staking a more modern claim and carving out their niche places in a busy marketplace. Each may owe something to the ideas of The Sandman and its blend of light and darkness, and but their own route into the light was ultimately shorter. In short, The Sandman‘s first episode arrives and holds its own – slow but sure – but it does not immediately stand apart. It’s fun and rich but also a little less urgent or vital than perhaps expected.

The ten episodes, viewed as a run, are uneven, but roughly break into three tonal arcs. The first narrative spins around the 1916 capture of Dream/Morpheus by the vain and misguided Roderick Burgess (Charles Dance) an Occultist who is actually trying to summon/capture Death, all so Burgess can retrieve his fallen first-born son… and the cell he builds holds the silent Dream for a hundred years with his captor desperately trying to make a deal. The subsequent choices made by Alex Burgess, his emotionally-broken second-born (played by Benjamin Evan Ainsworth and later Laurie Kynaston) and the actions of Burgess Snr.’s mistress, Ethel (Niamh Walsh and later Joely Richardson) who ultimately outlives both the Burgess men, form the introduction to who and what Dream is… both his enormous powers and his limitations… and, importantly, the consequences of his absence from his own realm of ‘The Dreaming’. Finally freed into the 21st Century, Dream’s first mission is to restore his home realm and locate his stolen relics in the waking world. His kingdom has gone through a lot of changes and his return doesn’t come without cost to those who left and those who remained (I guarantee this is the first time you’ll cry for a gargoyle).

The truth is that while the show is beautifully rendered and knowingly written, the titular Sandman is probably the least interesting character. It’s not that talented actor Tom Sturridge hasn’t got a handle on the character, he does perfectly well as the core thread running through the series. It’s simply that the softly-spoken, furrowed brow, distant and ethereal emo persona of  the Sandman / Dream / Morpheus works better as an abstract enigma on the printed page where less is more. Here, too often, less is less and Sturridge hovers on the edge of the scene, merely asked to look troubled, a little pissed off and to whisper his internal and eternal discontent – as if his favourite Smiths album had suddenly got scratched or he was someone who had definitely been Team Edward and took Twilight far too seriously. Even his sister (more about her soon) notes his eternal ennui-powered moodiness later in the run, saying he’s  “the stupidest, most self-centered, appallingest excuse for an anthropomorphic personification on this or any other plane.”  Zing.

Again, Sturridge is fine, but it’s often the supporting players who prove the catnip characters, individuals who are searching for Dream or for whom Dream is searching himself. This is especially true in later episodes where they get a great deal of the narrative spotlight.

Episode 3 brings in Johanna Constantine (pronounced ConstantEYE-n for purists) played by Doctor Who‘s Jenna Coleman. It’s one of several potentially controversial tweaks from the original material. Though there is a Johanna in the DC/Vertigo comics, fans might have initially expected the more infamous John Constantine (created by another comics legend Alan Moore and played on previous occasions by Keanu Reeves and Matt Ryan). However this variation of the hard-living demon-hunter is just as acerbic and fun and Coleman takes the opportunity to be just as assured in her emotional, physical and profane language. Episode 4 takes Dream into literal Hell in search of another relic. This, of course, brings him into the crosshairs and horns of both Lucifer Morningstar and her demon Mazikeen.  Most comic fans will know that both characters appeared in another DC/Netflix adaptation Lucifer, starring Tom Ellis and Lesley-Ann Brandt in those key roles. It was decided that, tonally, the same interpretation would not work for this and so we zig instead of zag. Instead we have a female Lucifer, essayed by Game of Thrones‘ Gwendoline Christie, with Cassie Clare as Mazikeen. They are far less whimsical than their series counterparts – here there is a true, less sympathetic darkness and every serious attempt to have Dream burn in Hell. He only narrowly escapes their wrath and even then there may be more trouble with them down the road of bad omens and good intentions.

Winding through early episodes we see Ethel’s illegitimate son, John (David Thewliss) – now grown up (unlike his magically-preserved mother) but kept locked away. He is visited by Ethel when she realises Dream is free again. Knowing John hid the powerful amulet that belonged to Dream, she’s determined to keep him safe from his potential wrath at all costs but John’s release into the outside world brings consequences of its own.  It’s in the fifth episode that Thewliss gets his showcase. Entitled 24/7, the tone is of a visceral, nihilistic version of a Twilight Zone-esque entry with John arriving at a diner and his search for perfect truth impacting all the people he meets, exposing their true feelings and dangerous desires. It does not end well for anyone. It feels like something of a diversion – something that in any other show might even be considered filler – but it plays an important part before the latter half of the run spins off in a new arc.

It takes until the sixth episode for fan-favourite Death (Dream’s sibling) to debut and it’s worth the wait. One of the best interpretations to come out of the comics mythology, this version of the grim reaper is a young, slim girl with an iconic ankh around her neck and who takes her job seriously but never without a sense of bittersweet whimsy. As explained, in a number of sequences lifted almost word-for-word from the original printed page, she once felt lonely but realises she is with people at their last and most personal moment to act as a guide and that’s about as connected as anyone could ever be. Some parts of fandom grumbled when a black actor Kirby Howell-Baptiste took the role (fan-casting of the famously pale reaper had included a wish-list that went as far back as a younger Christina Ricci). However, Howell-Bapstiste is note perfect and, ultimately, she’s the kind of reaper that we all might secretly wish would come and sit down beside us when our days are done.

The latter half of the run focus more on a character called Rose Walker (a very impressive and engaging Vanesu Samunyai) a young girl searching for her lost brother. However her origins and future tie into other realms and Dream becomes concerned that Rose may actually be a ‘Vortex’ capable of annihilating entire realms with the untapped powers at her disposal.  It becomes a race against time as the escaped Nightmare creation known as The Corinthian ( Logan/ The Fugitive‘s Boyd Holbrook) a magnificently malicious character glimpsed in early episodes, targets her to obtain her powers. Given that the Corinthian is perceived as almost ‘serial-killer royalty’ and courted to even appear as a special guest at a very darkly-themed convention of like-minded souls, there’s black-humoured fun and horror in the mix, with Rose finding she might not be able to trust either Dream or The Corinthian with her welfare.

Alongside those mentioned above, there’s a plethora of other acting talent in fairly minor roles with appearances by veterans such as Stephen Fry, Ian McNeice, Meera Syal, Sanjeev Bhaskar and Bill Paterson and the likes of Patton Oswalt, Mark Hammill, Roger Allam and Lenny Henry provide voice performances. Newcomers such as Mason Alexander Park  (as desire) certainly make an impression. Everyone in the cast knows it’s a quality production and brings a warmth to their performance – though sometimes, to avoid any claims of ‘stunt’ casting, you wish there were more scenes for them in the wider run to justify their presence in the marketing. (Constantine and Death certainly need wider coverage).

The Sandman ultimately feels like a show flexing its fantastical muscles and seeing what works the best, drawing its main narratives from the early comic chapters Preludes & Nocturnes and The Doll’s House but at first a little unsure of where to apply its pressure points. Watching the first couple of episodes it will likely be a case that some of the audience (both purists and casual viewers) may find it fun but less must-see than they might have hoped, but further investment in the episodes that follow sees the tapestry begin to take shape and improves the over-all experience. By the end of this initial run, there’s much to recommend and it’s obvious that a second run could draw on and find firmer ground. 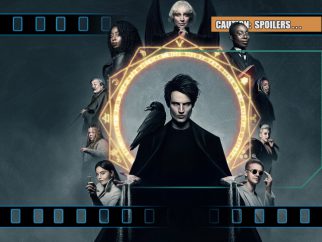 Dayshift: Fun but formula Vamp flick amps up the action…