That was then, this is noir... the return of cult hero 'Veronica Mars' is largely a success...

It’s Spring Break in Neptune, California and the town’s residents face the influx of partying  youth with trepidation or an eye for profit. But both are about to be affected by the start of what appears to be a bombing campaign and a rising body-count. The victims’ families each have their own agendas and spheres of influence and as tensions rise, fingers are being pointed in all directions. And at the centre of the chaos… Mars Investigations finds itself caught in the middle  with Veronica and her father Keith each having their own theories about the reasons begind the attacks and the culprit.

Logan is back from his most recent mission for the navy with an important question for Veronica, but will her answer cement their turbulent relationship or doom it?  As ever, the personal trials and tribulations seem as much a matter of life and death as solving the crimewave invading the town…

“A long time ago, we used to be friends. But I haven’t thought of you lately at all…”

There’s certainly an argument that if you’ve found a winning formula you don’t mess with it too much and Veronica Mars is a concept that knows its familiar strengths and plays to them, even as it toys with flexing its boundaries. The original three-season run of the show (on UPN and then The CW) created a distinct ‘teen-noir’ genre, mixing the trials and tribulations of navigating your teenage years with some genuine hard-boiled detective work and that’s essentially what the new run delivers, albeit with the cast now acting their actual ages (even if the same isn’t always true of their characters’ decisions). Though she’s voiced Elsa in Disney’s Frozen and helped headline The Good Place for NBC, Veronica Mars continues to be Kristen Bell’s signature role and first with a crowd-funded tv movie and now the hulu revival, she continues to deliver that compelling vibe of tomboy strengths and vixen charms that’s fuelled spunky reporters and Nancy Drew descendants over the years.  Watching her back in action for an eight-episode run, it’s a bittersweet reminder of that potentially rich and full-of-potential young adult market that the CW regularly still aspires to capture but so often fails to achieve beyond formula.

Enrico Colantoni remains the secret weapon of many a series (watch him as a completely different kind of character, crime-lord Elias in Person of Interest to see his magnificent range) and his return to the role of Keith Mars is a reprise of one of his most beloved on-screen creations. With a side-story about his concerns over memory-loss and fatigue, Colantoni effortlessly moves between well-timed familial banter with Bell and some genuine heartfelt and bittersweet pay-offs.

The supporting cast’s new members are nothing to be sneezed at either. J. K. Simmons once again demonstrates the art of  turning up and owning every scene he is in, essaying yet another variation on the kind of affable character who can suddenly exude a quiet menace and who speaks volumes even when smiling and silent. His scenes opposite Colantoni could probably fuel a spin-off of their own. Patton Oswalt also explores some familiar ground with another ‘shlub with attitude’ and a character that’s interestingly hard to nail down from the start. Newcomers also impress: Izabela Vidovic as Matty reminds audiences of a younger Veronica and British actress Kirby Howell-Baptiste (another Good Place resident) supplies a suitably dynamic bar-owner, Nicole

It’s a detective show built on style and snark and that is a difficult thing to pull off – a zippy one-liner can be devastating with the right delivery yet merely annoying and self-serving in the wrong hands and though the show pivots around the insults and wordplay with machine-gun like rhythms, it all comes with an organic panache with a decent hit-rate. Rob Thomas is perhaps the most manipulative story-teller since Joss Whedon, able to yank audiences one way or another, out-maneuvering the second-guessing hopes, the third-guessing despair and doing handbreak reversals that often gracefully become well-executed three-point-turns albeit with collateral damage. It’s a broad tapestry – arguably with too many  plates spinning or threads in the loom – but the weave is ultimately well done. Rewatch some scenes and you’ll likely note the ‘Chekov’s Gun’ bits you missed the first time around and the callbacks to previous seasons are fun. That’s not to say everything works – some story elements however well acted feel less solid in the rearview mirror and a few are there simply for their in-the-moment shock value, sleights of hand to  pull on the collective marshmallowy heart-strings (you’ll know them when you see them).   And Veronica, though our heroine by default and by wont of nostalgia, isn’t always the person we’re cheering for – she’s hugely dysfunctional, sometimes her own worst enemy and at that awkward age where she’s old enough to know better and young enough to be careless. Putting aside the perfectly-legal-in-California, if sometimes problematic habitual drug-use (which goes beyond grass) and reckless endangerment of herself and others – not to mention a role-reversal that sees Logan Echolls (Jason Dohring finding new ways to make his own signature role interesting again and as the more balanced of the two), there are several off-moments when the script makes her simply cruel and condescending rather than edgy and acerbic.

Veronica Mars may not be a show for everyone. Yes, there may be a few too many cameos from seasons past, ironically, pushing out the opportunities to give some of them more to do, but from the opening bars of the show’s signature song (originally by the Dandy Warhols, but here sung in a new more laid-back version by Chrissie Hynde) to the closing moments of the final episode (entitled Years, Continents, Bloodshed and which forebodingly refers to a notable quote from Veronica’s first year) existing fans will find much to celebrate and newcomers can see what all the fuss was about… 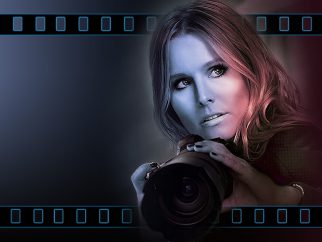 Will ‘Zombieland 2’ double-tap into undead success?