The members of the Targaryen dynasty test their mettle and show their prowess - but not without deadly consequences...

As advisors line up to give King Viserys Targaryen their take on war strategies and the best suitor for Princess Rhaenyra, it is clear that the monarch himself is both tired of their self-interest-driven fawning and of the physical and emotional weight of his role, pained by the decisions he is being forced to make but also unwilling to fully bend to their wishes.

Even as he goes on a royal hunt to mark the anniversary of finally being able to provide a male heir and the imminent arrival of another child, there are those who seek to use his ill-health and questions of that heir to secure their positions going forward.

But will either of them survive their trials by fire?

The first two episodes of House of the Dragon were, by their nature, scene-setters and world-builders. With its third episode, we’re now starting to fire up the independent engines and mythological might that the series seeks to achieve. We’re also starting to get a better idea of whom some of the standout performances are coming from, not by discussion of their charisma, but by demonstrations of it.

Milly Alcock has been a quiet revelation over the past few weeks as the young Princess Rhaenyra Targaryen.  At first looking like little more than a Mini-Me Daenerys, she’s quickly shown the kind of backbone her character needs and this episode in particular demonstrates just how formidable she can be when she wants something. First spurning the advances of would-be suitors (who seemed more like lecherous old men), then laying down the law to her weary father and ultimately taking down a rampaging wild boar while her the king had to settle for a cornered deer and the kind of ‘hunting’ trophy usually favoured by modern millionaires and safari’d out dentists. It’s ironic that Alcock herself is going to be gone in the next week or so as the series time-jumps ahead (Emma D’Arcy will assume the adult role of a princess a decade older). With a decade of performances under her belt, this is certainly the highest profile show for her and the Australian actor is definitely a name to watch.

Matt Smith has largely simmered so far, plotting and frowning and generally being the character who enters stage left and makes you want to shout ‘behind you!!!‘. It’s the latter part of this episode where he finally gets to assume a more memorable centre-stage… and then some. Tired of getting no help from his royal brother and then being offered little more than token help and far too late, he decides to personally take the battle to the so-called ‘Crab King’, whose forces have been either massacring his men or at least containing them and preventing advancement for far too long.  In a sequence largely devoid of dialogue, Daemon strides out onto the deserted, war-torn beach of said crustacean miscreant  and seems… shock… ready to surrender, planting a white flag in the sodden centre-ground. Just when it looks as if he’s willing to lay down arms in a rather passive-aggressive way of snubbing the wishes of the crown, he rises up and begins cutting down the approaching army who’ve come to accept his defeat or kill him. Emboldened and resolute to an apparent suicidal degree, it’s a valiant, bloody effort and we get to see why Daemon is feared for his prowess. But it also still appears to be a futile gesture as arrows finally manage to find their mark and he stumbles. Of course, this is called House of the Dragon and, having brought the Crab King’s army out en masse to witness his demise, the trap is sprung (or at least salvation intercedes) as a winged, fire-breathing beastie appears and barbeques much of the enemy around Daemon – a counterbalance to the poor unfortunate who cheered a dragon’s arrival earlier and got stomped in the process.  It’s all very sturm und drang, shock and awe, cinematic and satisfying. Smith is impressively tough (just surviving the whole encounter through sheer force of will). The denouement, with the death of the Crab King (killed off-camera but still having an impact) feels like a suitable climax.  We’ve previously hated Daemon, but the series pulls a delayed ace from its sleeve and suddenly has us rooting for him in some regards. Creating an anti-hero is always satisfying and is far more interesting and morally-complex an achievement than just being a bad-guy.

The often-underestimated Paddy Considine gives us a king, Viserys Targaryen, who is one of the few characters not desperately trying to achieve power, but instead feeling its weight as he’s caught between doing the right thing and the pragmatic (and perhaps more understandable) thing. Various characters see Viserye as a weak ruler, but it’s rather that he’s a decent man unable to do the things that may be necessary to hold the kingdom (and his family) together. Hard decisions don’t come easy to him when they involve hurting people he cares about. He’s trying to please everyone and we all know that’s never going to work. Becoming more physically compromised by the episode (some through illness, some via his liquid-lunch indulgences) it’s clear that he’s probably not going to be around for much longer – which will leave a void waiting to be filled and the impetus of the series going forward.

The likes of Rhys Ifans continue to plot as this king’s ‘Hand’ – clearly manipulating events to suit he and his own family but perhaps one of the voices that sees all the wider machinations for what they are and advises his monarch accordingly. Fabien Frankel as Ser Criston Cole hovers around Rhaenyra as her protector and potential love-interest but doesn’t fall into the ‘saviour’ role given Rhaenyra can well take care of herself. Jefferson Hall pulls double-duty as twins Lord Jason Lannister / Tyland Lannister, neither of which have quite the charisma of their descendants, but who might prove more central as things move forward.

Second of His Name is a more comprehensive statement of intent than either of the preceding episodes in both character-building and epic widescreen visual, visceral entertainment and shows the potential of House of the Dragon going forward. It’s not yet the same phenomenon as Game of Thrones itself, but this third episode draws a metaphorical and literal line in the blood-soaked sand and dares you to deny it its lineage… 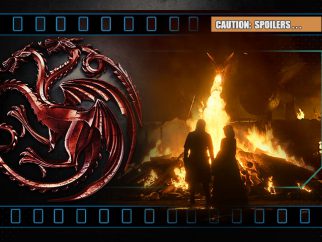