Jen Walters will need to pull something out of the hat if she's going to stop a magician using actual magic...

Donnie Blaze, a man who picked up some ‘tricks’ during his stay in the Kamar-Taj  temple, has spun his limited talents into a stage-career but given that some of his wilder antics have started endangering people, Sorcerer Supreme Wong wants Jen Walters to put a legal end to the problems with a cease and desist order. But the case becomes problematic when trying to copyright magic itself… however stupid and reckless Blaze may be, can a court force him to stop his act?

And with all these legal problems to face, can Jen find any time to go on a date?

After the establishing episodes to introduce us to the character, it does feel that She-Hulk: Attorney at Law could now be settling into its groove (twerking optional) and a format which won’t appeal to everyone but is marking out a certain self-deprecating niche making fun of the MCU. It’s basically becoming exactly what the original pitch always seemed to be… a superhero version of Ally McBeal with enough antics to entertain the casual viewer and enough planted references, faces and deep-state easter-eggs to accommodate all comers with a bit more knowledge of the source material.

To that extent the latest episode covers its bases and provides thirty or so minutes of smiles and laughs, though perhaps no outright guffaws. The jokes range from the easy/predictable almost sit-com-like banter to the almost slapstick action sequences that boast decent CGI without universe-ending stakes. There’d been some speculation that the appearance of a character named Donnie Blaze would somehow involve Johnny Blaze, the pedestrian identity of the demonic Spirit of Vengeance the Ghost Rider (played by Nicolas Cage for two big-screen movies and by Gabriel Luno as the Robbie Reyes variant in Agents of SHIELD). While the moniker seems like a case of blatant fan-baiting, it appears that there’s no connection and the only infernal flames are the minor sparks being fanned by a second-rate magician who’s turned his brief tenure as a disciple at the Kamar-Taj temple in Kathmandu into a third-tier career as a dismissible stage-act. Rhys Coiro gives Donnie a sleazy lack of charm over-balanced by ego and a character who is also less than pleased when Sorcerer Supreme Wong asks Jennifer to hit him with a cease-and-desist for his act before someone gets hurt. It seems something of a slam-dunk case, though not one that’s helped by eternally-tipsy valley girl Madisynn (Patty Guggenheim) who is zapped through a portal during the act but is now, like, totally, y’know, over it, y’know? Guggenheim ably gives us a ditzy, scenery-chewing debutant, but a character that the script only uses again and again for the same gag and one that somewhat outstays her welcome after proving that sound does travel in a vacuum.

Elsewhere Jen is dispirited by the lack of a personal life and her dating apps getting no interest from potential suitors. It’s only when she changes the member ID to She-Hulk rather than Jennifer Walters that she starts getting flooded with hopeful ‘matches’. Again, it’s a decent enough gag, but it seems highly unlikely that Jen wouldn’t get genuine interest prior to going the emerald-hued route: she’s smart, attractive and has been plastered across the entertainment networks, so you’d expect at least some people would make the connection. After a string of unsuitables, it seems she’s found some compatibility with a caring, sharing pediatrician built like a gym-enhanced wall. He is, of course, too good to be true and far less interested in the everyday Jen when she transforms back after a night of presumed passion.  Like McBeal we get that balancing work and personal life is a tricky dilemma, but one hopes it won’t become just a checklist of cliches, even if some get subverted along the way.

There’s some repeated cracks at social-media (probably well-deserved), some nice background detail with classic magician posters adorning the theatre walls and the aforementioned CGI is good enough. We’re getting used to the Shulk CGI itself now and this time the main adversaries are a small army of erstwhile pocket-sized demons that have to be punched, kicked and swung back to their home dimension. It provides a fun enough sequence, though it’s quickly dealt with and doesn’t really have any sense of urgency.

A fun enough episode, balancing the slapstick and banter with a notable increase in the fourth-wall breaking, but while totally fine, it’s also not a particularly boundary-breaking or memorable one. 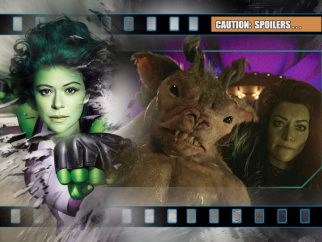