Amazon's beautiful Middle-Earth montaged prequel continues to arch its back and roll its Rrrrs...

Though Galadriel and Halbrand may have escaped a watery fate, their ‘rescuers’ seem to have serious issues with their very presence, though it leads to some interesting historical revelations.

There’s no doubt that on a visual level, The Rings of Power continues to be quite magnificent – whether it be sailing the oceans, flying the skies or scrambling through the dirt, it is pixel-perfect and would be quite an astonishing achievement for the cinematic screen, never mind a streaming service. It has instantly sent a benchmark for others to follow.

On the story-telling front, there’s also much to appreciate – certainly its sheer ambition equals that cinematography – but it continues in a vein that is cleaner and more streamlined and delineated than that other current far-flung epic, House of the Dragon.  JRR’s world is clean, elegant and majestical, GRR’s is passionate, sodden and messy… and while there’s more than enough room in the schedules for both approaches, it’s clear some will like one more than the other.

Saved by the rough-and-ready sailor Halbrand (Charlie Vickers), Galadriel’s story-thread takes her to Numenor, an island paradise that wants little to do with the Elf and her kind, but also sees the danger in letting her merely depart their shores taking word of their land. We find out that Halbrand’s heritage and his reason for riding the waves may have far more to it than it first seemed. It could be that his family and Galadriel’s own history may have revolved around each other in the darker days of war and is now giving them a chance to unite to stop that darkness rising again. It also brings in yet more characters to follow on their own journeys. There’s the Captain’s Guard Elendil (Lloyd Owen) whose heritage and respect for the Elfen ways puts him at odds with his Queen Tar-Míriel (Cynthia Addai-Robinson) , but also in a prime position to monitor events and stay the hands who would act in violence. Subsequent scenes show Galadriel accompanying Elendil on a horse-ride – something lovingly delivered in slow-motion but which does no favour in the length of time devoted to it (but does allow Morfydd Clark to at least smile for once).  If the show has faults it’s sometimes in sequences like this and which almost scream “Look at this! Isn’t this epic?‘ when we already know. The other fault is in the exposition, talking at length about lineage and somehow managing to show a small scrap of paper and explain how it’s not only a symbol but a detailed battle-plan to hurry along the plot.

Nori (Markella Kavenagh) and her fellow Harfoots are getting ready to migrate again, calling into question her father’s ability to keep up. There’s also trouble when the Stranger who fell from the skies makes his presence known and risks all the Brandyfoots (Brandyfeet?) being expelled from the caravan.  At the moment, this thread seems like almost comic-relief, though there’s some nice cultural touches as Sadoc Burrows (Lenny Henry) solemnly reads the names of those lost during the previous migration are read out and remembered and the presence of the Stranger likely leading to some of the biggest revelations of the saga – eventually.

Elsewhere, Arondir (Ismael Cruz Córdova) is a captive of the Orcs and made to work in the equivalent of a prison chain-gang, carving out their trenches while trying to find a way to escape. There’s really good choreography as the captives attempt to use their very chains against their captors and clever use of the landscape ensures some memorable scenes. The order to  ‘Release the Warg!‘ may not have quite the resonance of a Kraken but it does the job.

Once again we leave the week’s proceedings with the approach of an indistinct outline of a new character, this time seemingly Adar, leader of the Orc digging party and the title of this episode. It’s doubtful he’ll be as kind to Arondir as Elendil was to Galadriel… 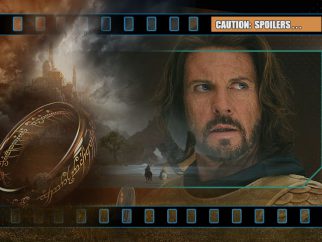