'Memento' meets 'The Wicker Man' - the latest 'Tales...' feels like an arthouse take on the ties that bind...

Disorientated, Damon awakes in the middle of a forest, aware that he’s hand-cuffed to a dead woman who has already turned… and that he’s being pursued by villagers from a local community. Desperate to make sense of his fractured memories, he attempts to get back into the nearby enclave and he is slowly able to trigger both happy and darker memories from his previous stay there. The local people want to punish him for the crimes they believed he has committed and Damon has very little time to piece together recent events and his place in them…

Whatever the truth, the real danger may be from the living and not the undead…

Of all the Tales of the Walking Dead to date, Damon is perhaps one of the most unsettling – very much feeling like an arthouse murder mystery. The story is still set in the US (Madawaska, Maine to be precise), but there’s a very European slant on a different slice of the horror genre and not just because a majority of the cast are speaking with a French accent, living in an enclave that’s ridden out the apocalypse, not completely isolating itself in a physical aspect but very much insulating itself in a cultural way.

Reminiscent, in part, of Memento (Christopher Nolan’s’s early calling-card mystery, based, in part, on a short-story/pitch called Memento Mori penned by his brother Jonathan, now show-runner on Westworld) it is a story that plays with memory and perception. The acclaimed 2000 film told a murder mystery in reverse order, with Guy Pearce as a Leonard Shelby a man with anterograde amnesia, unable to remember previous events and trying to establish who had killed his wife. The action in the film played out (from the audience’s perspective) in reverse order, with each scene alerting us as to whether Shelby’s brief recollections of context were correct.

For this Walking Dead entry, the problem with memory isn’t explained until later in the running-time, but its main character Davon is struggling with scrambled recollections to work out what happened to him prior to waking up in the woods handcuffed to an unquiet corpse. The unfamiliar location, the foreign language and accents from his pursuers all add to the confusion. As an audience we’re along for the disturbing ride as genuine memories mix with hallucinations, possibly due to his head wound. We know he had arrived in the village and was staying with two sisters and nephew (Embeth Davidtz as Amanda,  Loan Chabanol as Nora and Gage Munroe as Arnauld) and that there was some flirtation with the younger sister Nora, but while it seemed almost idyllic there are snatches of much darker events in the literal and metaphorical foundations of the family home. Damon is now being pursued by the villagers (almost literally carrying torches and pitchforks) and has to keep one step ahead of them as he battles to piece together what happened.

Jessie T. Usher, probably best known for his role as the speedster A-Train in Amazon‘s The Boys, plays a far less arrogant character here, one who is confused, desperate and running just to stand still. It’s fascinating to see him working out the jigsaw of his memories, wondering how each piece fits into the greater whole. In many episodes, the audience knows more than the characters, but here we’re very much in our own headspace and it’s not until the closing minutes that we get the full picture of the whys and whats of the piece. There’s a whole range of possibilities, especially given the sense that this isn’t a typical TWD episode and we may be second-guessing ourselves along the way. In the scene where Damon is finally caught by the villagers and condemned to a horrible death, there’s an echo of Edward Woodward in The Wicker Man, realising that there’s a very good chance that his outsider status against a collective group has already doomed him.

It’s all very atmospheric – well-lit and lensed with all the menace and edginess a rural community can muster and could even be from another past time-period entirely – the actual Madawaska, Maine location is far less rural than shown here. The various ‘Tales…‘ entries have all dealt with a smaller cast than normal. Here the undead that stagger around the edges of the area are far less of a direct threat than the machinations within, playing a very much supporting fixture and a central cast of four or five characters hold the drama together. Embeth Davidtz, a talented, versatile and much under-used actor makes the most of a role that’s hard to define for much of the episode and Loan Chabanol positively sizzles with gallic glances. Gage Munroe remains something of an enigma as the only man of the household until Davon came along and ends up a pitiful, tragic figure in many regards.

Damon might not be to everyone taste as it requires concentration and attention as you work through it, wondering which direction it will go, but director Michael E. Satrazemis (who also delivered the very different Dee and Blair/Gina entries as well as working on multiple episodes of The Walking Dead and Fear the Walking Dead over the last few years) continues to show he can turn his hand to any style needed and is definitely a director to watch. 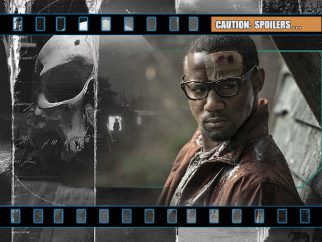