Disney's annual display of their intentions promises much from Marvel Studios over the next two years...

Though the SDCC (San Diego Comic Con) has become a major venue for ‘announcements’ over the years, in recent times, some of the studios and industry movers-and-shakers have been holding their own media events to launch their latest news and products. The D23 Expo was held this weekend with Disney announcing many of the projects it’s about to release or start working on.  There was some interesting news coming out of the Marvel corner of Disney‘s empire. Some of the key confirmations were:

Werewolf by Night is Marvel Studios‘ first tv special, released 7th October just in time for Hallowe’en. Released in black and white, with a distinctly ‘classic’ feel to the horror, mixed with some fang-in-cheek arched performances, the scene is being set for a moonlit hunt of mythological beasties. The official blurb reads: A secret group of monster hunters gather at Bloodstone Castle following the death of their leader and engage in a mysterious and deadly competition for a powerful relic, which will bring them face to face with a dangerous monster.  The line-up includes: Gael Garcia Bernal as Jack Russell (yes, really) whose ancestors became lycanthropes after a chance encounter with Dracula (in the comics’ lore, at least), Laura Donnelly (late of The Walking Dead) as  Elsa Bloodstone and Harriet Sansom Harris (Frazier, Desperate Housewives) as Verusa.

The much-anticipated Secret Invasion series got an official first trailer with Samuel L. Jackson at its centre, reprising the role of Nick Fury. Based on Marvel Comics’ line-wide epic story in which it was revealed key heroes and villains had been quietly replaced over the last few years by the shape-changing alien race known as the Skrulls, the series takes a similar plot with Fury heading back to Earth to find out the scale of the stealthy plans. We’ve already established from their previous appearances in the MCU that the Skrulls are not being portrayed in a stereotypical alien menace type capacity and that many want to live in peace… but it would seem that at least one faction is intent on causing some major problems Earth-side and Nick Fury is one of the best hopes of stopping them. The cast also includes Cobie Smulders (reprising her role as Maria Hill), Ben Mendelsohn (seen in Ms. Marvel) back as Talos, Martin Freeman returning as CIA agent Everett K. Ross  and Don Cheadle as James Rhodes. Olivia Colman and Emilia Clarke also play key roles in the conflict (of course, can we trust any of them to be the real thing?). The series was shot last year with some key scenes being lensed in Leeds / West Yorkshire as well as London and Liverpool.

It was too early for the likes of Armor Wars ( a series highlighting Don Cheadle as James Rhodes as he goes after stolen plans linked to Tony Stark’s previous creations and currently scheduled for 2024 but there was an updated logo. The same is true for Daredevil: Born Again with stars Charlie Cox and Vincent D’Onofrio attending the event. That series, based on the classic Daredevil run of the same name, seems likely to tell what happens when the Kingpin finds out Daredevil’s true identity and slowly begins to strip away all the things important to Matt Murdock. Cox apparently confirmed that the series is being seen as a reboot of the characters rather than a direct continuation of the Netflix series. Cox also appeared as Matt in the recent Spider-man: No Way Home and will also appear in upcoming episodes of She-Hulk: Attorney at Law. 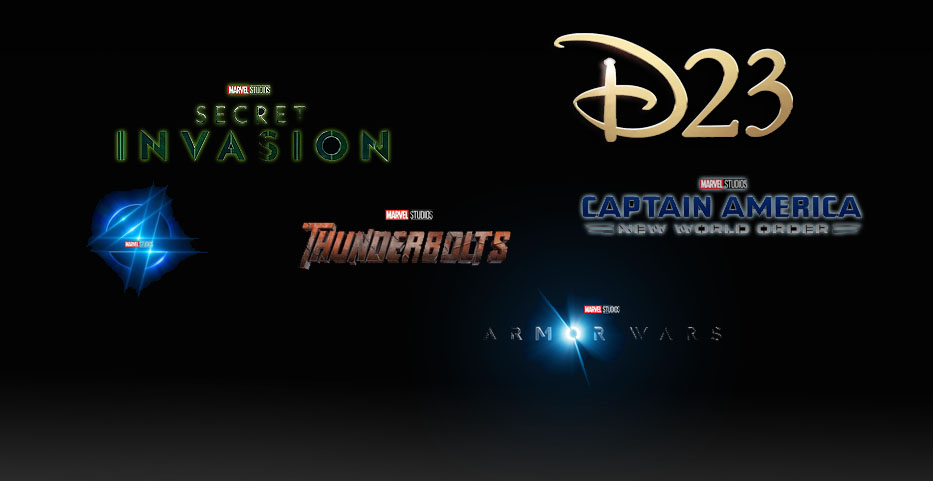 The next Captain America film was formally confirmed to be Captain America: New World Order with Anthony Mackie’ centre-stage as Sam Wilson. Reprising their roles from the Falcon & the Winter Soldier series will be Carl Lumbly as Isaiah Bradley (the first man to receive the Super Soldier serum and who felt betrayed by his nation thereafter) and Danny Ramirez as Joaquin Torres. Tim Blake Nelson who played Dr. Samuel Sterns in 2008’s The Incredible Hulk will return now mutated into ‘The Leader’.

If there was any doubt, Disney/Marvel also fully-confirmed that WandaVision director Matt Shakman will return to the MCU taking over the reins for Fantastic Four. Some had expected an announcement about casting on that project, but Kevin Fiege noted that with Shakman only coming on board two weeks ago, he wanted to make sure the director was fully onboard to help select the cast… and that there’d be plenty of time for news over the next year – with the film unlikely to debut before 2024.

There was much speculation about the possible Thunderbolts movie and we got a better idea about it at D23. The film will feature a group of characters assembled to be something of the anti-hero equivalent to the Avengers and perhaps having more in common with DC‘s Suicide Squad. Those making up the team will be Stranger Things‘ David Harbour as Alexei Shostakov/Red Guardian (last seen in the Black Widow film), ​​Florence Pugh returning to the role of Yelena Belova (featuring in both the Black Widow movie and the Hawkeye series). Hannah John-Kamen as Ghost – last seen in the Ant-man and the wasp film, Sebastian Stan as Bucky Barnes, Wyatt Russell as John Walker/U.S.Agent and Julia Louis-Dreyfus as Valentina Allegra de Fontaine, the rogue team’s ‘handler’ answer to Nick Fury.

Loki has a confirmed season two. In addition to Tom Hiddleston as Loki, Owen Wilson as Agent Mobius, Sophia Di Martino as Sylvie all reprising their role from the first run, there’ll be a new character, a librarian played by Ke Huy Quan. One of the most tweeted moments of the event came when Harrison Ford, there to promote the fifth Indiana Jones movie, met up with Ke Huy Quan who – of course – played Short Round in Indiana Jones and the Temple of Doom.