The 'Game of Thrones' prequel heads to the backstreets and boudoirs as things heat up in King's Landing...

Daemon returns after his victory over the Crab King and despite the obvious tensions between his brother King Viserys and himself, Daemon hands over the captured crown of his crustacean conquest and pledges loyalty to the current ruler of Westeros. Despite some reservations, Viserys is glad to have Daemon back in the fold – he is, after all, family.

But family means different things to different people and Daemon is all too aware of the frustrations felt by his niece Princess Rhaenyra pressured as she is to take a suitor and secure the family line. And in the dead of night, he helps her escape her chambers to take her out on the town in disguise, seeing what really lurks in the ‘Streets of Silk’ and secluded alleyways below. However the events of the night and the forbidden passions and abuses of power it ignites could end up scorching the plans of all who have their eyes on power and position…

In a week where the royal succession protocols of the United Kingdom were thrown into sharp relief by the death of Queen Elizabeth II, a wholly different type of ruling dynasty – far more overtly ruthless, but equally aware of public perceptions, continued to eye the future of the throne in Westeros.

If Game of Thrones was known for one thing it would be the shifting loyalties of its ruthless main characters, but on a wider scale it was also notoriously known for its perchant for rather explicit sex. Though House of the Dragon has been delivering on the political, the violence and the creatures of the title, it hadn’t – until the fourth episode King of the Narrow Sea had any real carnal content except for some background writhing figures and some brief, well-choreographed grunting.  This may well have been because though the characters were already considered of marriageable age in Westeros, the prominent female actors in their twenties were mostly playing characters that would still be in school in the modern real-life era. Thus there was something of an ethical line to walk for the programme-makers if not the ensemble of characters as to what could be done to/with whom and how. That line was vaulted this week.

Princess Rhaenyra Targaryen (Milly Alcock) is growing tired of the way she was being shipped around the known territories in an effort to find her a worthy suitor. Many are too old, too young and some got into ill-advised sword-fights on her behalf – albeit with unexpected winners in war if not love. That draws the ire of the King Viserys (Paddy Considine), but it’s Rhaenyra’s ill-advised reaction to it all once home that would raise the blood pressure further. Sneaking out via a secret passage with Daemon (Matt Smith), both disguised as lowly townsfolk, the two walk the streets and eventually find themselves in one of the pleasure pits of Kings Landing, the Streets of Silk, where everywhere you look someone’s something is hanging about or in with someone else’s… and where things start to get amorous between Rhaenyra and her uncle.  (And if that’s ewwwwwww. then you clearly haven’t been watching the incestuous antics in the original show). However Daemon is unable to ‘follow-through’ and, frustrated, he heads elsewhere to sleep it all off while Rhaenyra heads home to her bedchamber and decides to scratch her awakened libido by bedding her loyal but now somewhat confused knight Ser Criston Cole (Fabien Frankel) instead.  Unfortunately, Rhaenyra has been seen out with Daemon and at least some of her activities compromised. The King gets to hear about this potentially incestuous incident through his ever-observant ‘Hand’ Otto Hightower (Rhys Ifans) and though such inter-family unions are hardly unknown in Westeros, realises the damage that could have been done – not merely the ‘deflowering’ of a royal maiden but the consequences if known to her claim to the throne (and Daemon’s likely power-grab). The consequence is that he unfortunately blames the messenger, Hightower, for such ‘lies’. Despite years of service and smart strategies (many, admittedly to secure his own position), Hightower is dismissed, possibly making Viserys yet another enemy in the process. Rhaenyra herself is left wondering about the longer-term consequences. Alicent Hightower (Emily Carey), daughter of Otto and the wife of the King also has some bedroom scenes, though they are far less energetic or remotely titillating, instead more of an indication of tolerance on her part.

Matt Smith certainly shakes off any vestiges of his Time Lord days and even with his hair cut shorter than in previous entries, it’s interesting to watch him coil his way through the courts and streets in a serpentine way that emphasises his disregard for etiquette and convention. This is a character that fully indulges his impulses and doesn’t feel stymied by anyone other than those immediately in his way. It’ll be interesting if this will be a creation that we grow to love/hate – last week’s entry indicated as much, but here he’s back to being deeply manipulative and simply tolerated for as long as possible until the dam breaks against him.

To be fair – intense though they may be, the sex scenes aren’t quite as explicit as Game of Thrones (again, the age-factor probably plays a part), but though strategically-shot for the main stars, there is still full-frontal nudity in many a supporting player and all charged enough to create blood, sweat and tears and enough flesh on show to create some controversy… hardly a new gambit for the show, but obviously a statement of further intent.

The Westeros shows have often played the flesh card to punctuate proceedings but at least here there’s a real sense of exploring characters motivations in the act itself. Rhaenyra actively wants to be seen as a woman, not a child (her age remains somewhat vague, perhaps with good reason) and a power in her own right and the night’s activities away from being sequestered in the castle are clearly an expression of that change from the frightened girl to one fascinated with the feelings she can stir in herself and others – even if she wields them with no real experience of the consequences. And it’s Daemon who knowingly takes advantage of it, encouraging that wildness he sees in himself and manipulating it to suit himself and her. He’s certainly the older, mentor figure, utterly abusing his influence and position, but it’s interesting to ponder how both Daemon and Rhaenyra finish the episode compromised but also emboldened and perhaps no less powerful than before… 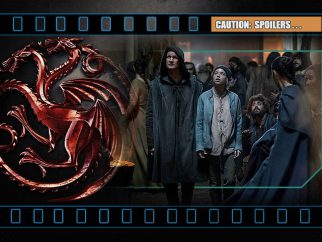