How far will Jennifer Walters go to defend her name and 'brand' and how humiliating will it be?

After their last confrontation in the courtroom led to blows, Jennifer Walters finds herself facing Titania once more, but this time it’s not with fists but with affadavits. Titania has laid claims to the ‘She-Hulk’  brand for a whole range of cosmetics and Jen’s earlier dissatisfaction and disassociation within the media’s moniker unfortunately does nothing to help her defence against her opponent’s claims.

How far will both women be willing to go to protect their brand?

And just how difficult is it to get bespoke outfits fit for a Hulk?

Building on the legal aspects of the previous episode, She-Hulk ‘s story of the week appears firmly fixed in the courtroom, now very much the aforementioned Ally McBeal-esque corner of the MCU rather than an the broad-stroked action annex. This week’s entry – Mean, Green, and Straight Poured into These Jeans – satirises multimedia, trademarks, frivolous lawsuits and marketing, but does so fairly broadly, taking some fun but rather predictable swipes at the opportunism involved. Jen shifts between her normal and emerald-hued form several times, but there’s very little ‘smash’.

Titania’s claims to the She-Hulk brand are pretty silly and light-weight as a story-device, even given the deliberately comedic-take (she even tries to promote her wares in the courtroom) and the whole thing feels like it’s swerving into slapstick of a heavier-handed SNL sketch. Yes, it involves Jen having to be humiliated by the disparate ensemble of her desperate previous dates, but we’ve already explored that avenue. Jameela Jamil (The Good Place) chews the scenery with relish and bats fake eyelashes that look like they’re losing the fight with gravity, but there’s really not an ounce of subtlety to be found.

The only other aspect of the episode is the introduction of Griffin Matthews as Luke Jacobson, a character that feels like a taller version of The Incredibles‘ Edna Mode. The idea of a dresser/costumier to the superhero community and all the extras that entails is fun enough to work but it serves more to set-up the final scene. (There’s no mid-credit extra, but the final shot is a last second reveal of another part of the costumier’s work and possible clue to one of his clientele, suggesting we may be seeing Matt Murdock sooner rather than later…

Much of She-Hulk is, at worst, a guilty-pleasure, poking fun at the sillier aspects of the MCU and populated by characters subverting their cliches. On that level it’s decent fun.  But of all the episodes, this feels like the least developed – apart from some worthwhile comments on the way women are unfortunately treated in both the workplace and social-scene (in particular Jen’s problem of how to balance ‘her’ and ‘She-Hulk’) and a one-line joke pitched to extend to a thirty-five minute outing… as if it’s, well, somewhat coasting on aspects already set-up… 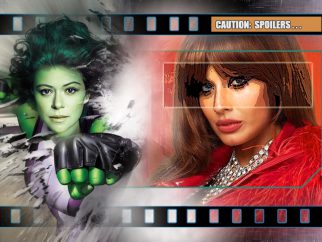 Walking, Talking and Orc-King… ‘Rings’ marks out its alliances…