Walking, Talking and Orc-King… ‘Rings’ marks out its alliances…

It's the Tolkien-version of 'The West Wing' as political walk-and-talk dominates - and uneasy alliances are forged...

As Queen Regent Míriel has visions of the end of Númenor and reveals to Galadriel that her arrival marks the beginning of a prophesy playing out, it seems that the forces across Middle-earth are still divided between their own interests and the whispers of the dark rising once again across the entire land and sea.

Elsewhere, the dwarves reluctantly share their closely guarded secret with Elrond and Arondir gets a reprieve from the Orc’s mysterious leader, but one that carries with it a terrible weight…

There’s a lot of talk in the ‘The Great Wave‘ latest entry in Amazon‘s Rings of Power, most of it solemn and weighty as a wave of characters are forced into decisions they would rather not be making, but doing so with the requisite resolve of all Tolkien’s ensemble of questing outliers. Such conversations come at the loss of a heavier action quotient, though a couple of urgent pursuit scenes punctuate the running-time.  The politics of Númenor are at the forefront of Rings of Power‘s fourth chapter as the island paradise and its rulers have to decide whether to rid themselves of Galadriel or to form an alliance with her against the rising darkness in the Southlands. There are factors pulling the Queen Regent Míriel (Cynthia Addai-Robinson) in different directions including differing takes on prophecy and the strength of her own devastating visions.  In there, there are moments that feel deliberately contemporary, perhaps even too on the nose. An early scene sees the brawler from last week’s episode warning that ‘elves are after our jobs….‘ and Trystan Gravelle, (looking very much like a Middle-earth Michael Sheen) as Pharazôn speaks of Númenor being a ‘kingdom of men‘ which seems less like sexist rhetoric and more like subtle shade against his sister, the Queen Regent, especially when he manages to engineer a potentially less than peaceful confrontation between her and Galadriel. The examination of popularity, public consent and even succession are also somewhat timely given events in the real world… and let’s not even start on the online racism.

The mysterious Adar (Joseph Mawle) makes his proper debut, not as some hulking Orc but as an imposing far-more-humanoid figure (and apparently, for those of us who are less of a bibliophile, a ‘Dark Elf’).  Mawle embraces it all magnificently. His ruthless, but quiet demeanour is at odds with the hordes he commands, but he cuts a sinister form, getting up close and personal and almost serpentine in nature. But he’s also the kind of character that decides to let one of the heroes go so that he can ‘take a message’ that the surviving humans should flee the area or be killed for their defiance. Beyond the tropes of many a questing epic, it makes no real sense and has ‘stupid villain mistake’ written through it like a stick of seaside rock. What’s more it looks as if Arondir (Ismael Cruz Cordova) is sent off with a full quiver of arrows (he’ll slow-mo pluck more from the air later) which seems a tad ridiculous – though fortuitous as he ultimately saves Bronwyn and Theo from another batch of Orcs who are after Theo and his mysterious fractured sword of fire (aka the Morgul Blade’). The Orcs continue to be delightfully-designed, full of sneers and bitey-teeth and a mixture of savagery and stupidity – definitely the knuckle-dragging grunts of any dark army’s cannon-fodder.

The scenes between Elrond (Robert Aramayo) and Durin (Owain Arthur) are played for both humour and pathos, the strength of their odd but enduring friendship leading to secrets and misunderstandings as Elrond uncovers something of the dwarves’ secret – a new seam of a strange ore to be mined that suggests a new chance at prosperity. The seam adds layers to their kinship that will reverberate further, but it’s fun to watch them peel them away in both relief and reluctance. Peter Mullan is almost unrecognisable as the elderly dwarf king himself.

The visual effects are mostly incredible, still setting benchmarks. As ever, almost everyone continues to speak with perfect Shakespearian diction, talking of tempests that will not be quelled and lines such as “You vex me , Elf…” (though there is one moment where, I could have sworn a man introduced himself declaring “My name is Kevin…” which would have been delightfully askew. (The character is actually Kemen, played by Leon Wadham).

The differences and similarities between this and other great mythological epics currently out there continue to be stark – delineated mostly by the brightness of the visuals and the methods of the main characters – but there also continues to be room for both. 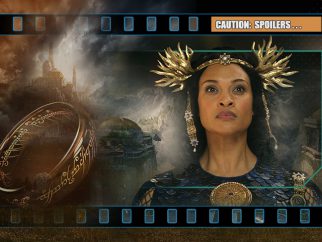