The zany She-Hulk finale reflects the series: a plethora of punchlines, pointless plotting and messy messaging...

After her emotional outburst at the award-ceremony, Jen Walters has been arrested and ends up imprisoned in the same holding cell that once housed Emil Blonsky during his trial. While Jen gets a similar conditional offer as Blonsky, fitted with an inhibitor device to prevent her powering up or Hulking out, she’s still going to hunt down the people behind ‘Intelligenica’, the group of misogynists who ruined her life.

As various threads crash conveniently into each other, Jen heads to the Writers’ Room and calls for a metatextual pause and the chance to sort out a decent epilogue to her recent adventures.

But just who or what is K.E.V.I.N. and what strange power does he hold over the entire MCU?

There are going to be a lot of viewers who like the She-Hulk: Attorney at Law finale and a lot of those that hate it. And there will likely be plenty, like myself, who find a way to do both as it veers  like a self-aware vehicle from one high-concept idea to another, executing some moments with pinpoint, on-target satire worthy of the source material and others using hand-wavery, vagueness wandering around in search of a resolution.

I’ve liked She-Hulk: Attorney at Law and admired it…but didn’t quite love it. Everything was there to make it work – Marvel essentially were greenlighting Moonlighting meets Ally McBeal with a MCU-twist – but the result often felt like a string of high-concept ideas strutting into a scene and then not sure what to do, almost a series of sketches that had good ideas but extended beyond their natural laughter-track, like fun bonus material rather than a full-on show.  The finale is all that on steroids.

The opening promises much. A deft reworking of the intro for 80s series The Incredible Hulk, (which originally starred Bill Bixby and Lou Ferrigno) it recreates the narration and scene-for-scene montage, placing Jennifer Walters instead of ‘David’ Banner in its sights and even having Mark Ruffalo replace investigative reporter Jack McGee. (Tatiana Maslany’s stand-in appears as an era-appropriate version of Jen’s alter-ego covered in emerald emulsion). It’s actually a thing of beauty, a perfect love-letter to those of us old enough to have known the introduction as a key part of our childhood (the only thing missing was the Joe Harnell ‘The Lonely Man‘ mournful lament which usually featured as the ending of each 80s episode, and which could easily have found a place here). It’s the opening round in an episode that couldn’t get more meta if it tried – and it does – a string of in-jokes and mind-bending scenarios designed for a deep-dive into She-Hulk‘s comic history and current state of affairs.

The problem with Jennifer going mega-meta is that her in-house complaints (that the finale was falling apart and being over-packed with illogical developments) are ultimately a self-fulfilling prophecy and all the threads that were weaving through the season now amount to less. You can appreciate the crazy self-awareness of Jen exiting the episode by a pseudo streaming-platform hub page to go in search of her writers (a parallel to the time she reached out of the comic book panel and went in search of her writer/artist John Byrne)… to her finding an overseeing super-computer called Kevin (the Knowledge. Enhanced. Visual. Interconnectivity. Nexus. and in no way meant to represent MCU overseer Kevin Feige! wink-wink) with whom she discusses Marvel’s overly-familiar story formulas and with whom she negotiates a better conclusion and a possible big-screen Shulkie debut… and the fan-friendly comments about bringing the X-Men to the screen (a thumbs up to the audience from Maslany and a thumbs-up back from us!) ALL of which should make fan-boys weep with glee. It’s all pretty smart, enjoyable, self-aware content having a careful, precise and calculated dig at itself.

As an episode it’s undeniably a metatextual celebration, but as a finale? It feels like nine weeks and one punchline. When we’re plonked back into the series-proper (or as proper as it ever gets) where does everything land? Nowhere really.  Almost nothing that’s happened up to that point matters. None of the blood-stealing, Intelligencia Neanderthals or Abomination/Emil Blonsky self-help groups  have any real room left to wrap-up with even a degree of logic or satisfaction and all being tied off with a couple of lines of throwaway dialogue. Equally, the balance between the idea of the troubles a woman finds juggling her personal life and career (even/especially with super-powers) feel like a nice hook to have got people interested and developed through the episodes as Jen flexes her emotional and physical muscles but are now relegated to lip-service decoration as the surreal-factor goes into overdrive.  It’s also a finale that still plays in to the ‘majority of men are morons’ maxim. Some of the digs about internet trolls and misogynists are worthy contemporary commentary but in empowering women away from familiar tropes, the scripts have failed to deliver much more than male stereotypes. Here we have Pug (Josh Segarra), Matt Murdock (Charlie Cox) and Bruce Banner (Mark Ruffalo) on Jen’s side, but one is befuddled, one is epilogue eye-candy and even Bruce’s appearance seem fated to play into the mistaken ‘hit first, ask questions‘ later machismo.

Equally the inclusion of the returning Bruce Banner / Hulk comes along with…drumroll…his son and that feels like a) a spoiler for what would surely have been a fuller story and bonafide big-screen revelation if World War Hulk makes it to the multiplexes or, if not,  b) a story-arc we’ll fail to get explained further. ‘Skarr’ (played by relative newcomer Wil Deusner) doesn’t even get any lines, merely a walk-on part and a shrug. And while the return of….drumroll…Matt Murdock is always fun, this second sighting is rather pointless compared to last week’s better-judged piece, the joke here being he’s late for all the action and is now being scrutinised by Jen’s family for matrimonial prospects. It’s awkward-enough fun, but seems like another in-the-moment joke and likely at odds with any development or continuity for the forthcoming and far darker Daredevil: Born Again.

There’s lots to recommend She-Hulk: Attorney at Law and in many ways it has been exactly what the best-selling John Byrne comics version of the character should be… but it feels more like later episodes of Moonlighting rather than that anarchic genre-buster in its prime. If it does get a second series, it should be less about pushing boundaries than playing to strengths… 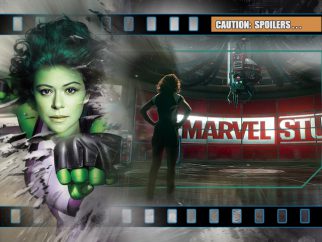