The moment to attack the Empire’s monthly payload has finally arrived and there are tensions as the small rebel group get ready to go through with their daring heist.  But even with a well-researched, well-executed plan, things can still go wrong and not every eventuality can be accounted for in advance.

As the rebels get close to succeeding, things begin to unravel. Can all the rebels be trusted and will a celestial event help or hinder their escape… and who will make it out alive?

While Andor continues at a seemingly slower pace than almost any other show out there, the latest chapter (‘The Eye‘ – not to be confused with the recent entry in that other high profile show The Rings of Power) is positively giddy compared to last week’s ohhhh-ssssso-sssslow entry. Almost all of the action is from one story-thread – the rebels on Aldhani finally initiating their plan against the Empire’s outlier base and seizing the month-long delivery of pay-roll. Critiquing a show is partly about understanding the dynamics and appreciating something for what it is – and isn’t.  It’s still possible to be critical of the pacing, but we now know the established pentameter, so it’s a moot point. In most situations, this heist would be the climax of the season, but we still have over a month of episodes to go so the feeling that Andor is a supporting player in his own series (albeit surrounded by top-notch people) will likely yet evolve as we follow him forward.

On screen, some of the training and pre-planning doesn’t seem as relevant as it did – Andor and Arvel aren’t in the formation they so notably changed and some of the marching itself doesn’t quite feel as ‘Imperial’ as it should (The Empire are imperial scum, this is true, but you have to give them credit for their attention to fascistic marching protocols).

The showrunners have talked about the way that different parts of the Andor saga reflect different styles as the story progresses.  All the episodes have had the sense of telling about the dirtier nature of insurgencies and resistance. The opening salvos were largely about living under the sense of a growing occupation, then we were on to political musings mixed with kitchen-sink drama, still small pieces moving against a larger picture.  The Eye definitely feels like an overt shift to old-fashioned war drama –  less the conventional ‘heist’ of money discussed and more akin to Where Eagles Dare, where the stakes become a matter of principle against an outpost of an oppressive enemy.

There’s some strange or at least surprising pacing in story structure. I mused last time that I thought at least one of the rebels would turn out to be a spy. True believer Karis Nemik (Alex Lawther) turns out to be the real thing, a devoted revel, but is mortally injured during the escape, surviving long enough to navigate Andor, Arvel and Vel Sartha out of the line of fire. Faye Marsay as Vel has been a striking, but down-to-earth addition to the mythology’s growing ensemble of female heroes and I’m glad she made it out alive.  However Arvel (played by Ebon Moss-Bachrach, rapidly becoming a go-to for television’s conflicted characters) the rebel who told us the sad story of how he became a convert to the cause because of the death of his brother, turns out to be a liar – and one who thinks he sees a kindred spirit in Andor/Klem because of their hardships growing up and pragmatic attitude to survival. There are undeniably some parallels there but not enough.

In what almost feels like the Andor the series watching the original film with Han Solo and Greedo and then musing ‘Hold my Corellian ale…‘ Andor (the character)  doesn’t engage in much small-talk but simply shoots Arvel rather than continue to listen to his plans to hijack all the money for himself. In some ways it’s a disappointing waste of an interesting character, but on the flipside, Andor is actually a bigger pragmatist and sees Arvel’s attitude as both unworkable as well as immoral. Now, let’s be clear… Andor doesn’t object to negotiating at the end of a gun and subsequently demands his share of the loot while simultaneously returning the crystal he was given as a down payment… but his attitude is that while he genuinely wishes the ‘Resistance’ well, he’s now fulfilled his job, wants the agreed payment and then to be gone. He’s being neither villain or hero… he’s just being (ironically) a survivor.

FX-wise the show has generally been as impressive as you’d expect, but generally (and refreshingly) relying on in-situ production values. A studio-set instalment more than most, there’s only a couple of opportunities to overtly flex those pixels here beyond phaser-fire. The atmospheric event of the title – a meteorite shower holding astronomical and theological importance to Aldhani’s nomadic tribes – is nicely rendered and certainly more impressive than any Perseid shower I’ve stayed up for in vain, though the stellar event isn’t as well-attended as one might expect (a handful of shepherds and farmers and their rugs). The Empire soldiers mostly resent the spectacle as another reason to tolerate the locals, but bearing in mind they tend to trash the valley in the near future, they bite their tongues and holster their weapons. There’s some requisite oooohs and ahhhhhs, but it’s the arrival of the TIE fighters that ramp things up. The pilots entering their craft, installed in the flight hanger, make a nice visual, but this is Star Wars and so the craft don’t last very long in combat.

Halfway in and I’m still a convert to this very different, but coherent, take on the outliers of the Star Wars universe. It’s been too slow but still rich in tone and character and now the only job is to pick up the pace and perhaps further develop some of the supporting characters missing from this chapter but who are likely to play their parts soon… 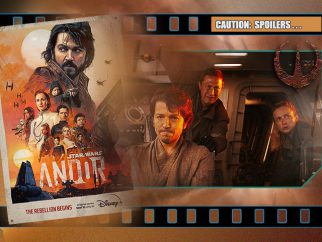