Ben may be engaged to Addison, but now... he feels like a new woman. Is his bountiful Leap going to pay off?

It’s 29th July 1981. Ben finds himself in Los Angeles, but it’s not just the fashion that’s a shock – Ben is now in the body of Eva Sandoval (Anastasia Antonia), a bounty hunter who is in the middle of a job and about to receive two proposals – one of them indecent and the other the result of her long partnership with fellow bounty-hunter Jake (special guest-star Justin Hartley).  As Ben/Eva tries to stall giving Jake an answer to his bended-knee offer, Addison (in hologram form) reveals that Ben’s Leap seems tied to one of the targets they are pursuing. But when it turns out that the errant Tammy Jean Jess (Sofia Pernas) is only wanted on unpaid parking tickets, just how dangerous can the situation be?

When it turns out that there’s more to the situation than vehicular misdemeanors and the Mexican Cartel are somehow involved, the bounty hunters find that they might be becoming the hunted…

Initially, this feels very much like an example of the original Quantum Leap with very little changed from a script written at the time (and, in some ways, why should it – the premise of the show is the same and the ’80s era of the week is, well… what the ’80s era was…) and with just the more contemporary material adding structural support. On that level it’s a decent-enough episode, aligning itself with the expected format. There’s some establishing music and images to set the era (the day of the Charles/Diana wedding), a girl in danger, a familial complication and Ben having to navigate through the maze of things his character should know (if they were themselves) and identifying the innate problem the Leap needs to solve. Equally there’s some nice reactions from Addison when she realises the nature of Ben’s body-swap. (Her comment that “You’ve been a woman for thirty seconds and you’ve already been harassed, assaulted and insulted…sounds about right” rings sadly true. But there are some twists along the way (our wacky bail-jumper isn’t what she seems) but it generally sticks to the requisite beats within the Leap itself. One thing that does makes the story work a little better in the end is that not everything is tied up in a neat bow – for instance, the fact that Ben doesn’t make the decision over Eva accepting Jake’s marriage proposal for her while she’s displaced. It’s actually a nice and more mature touch that Ben recognises that such an important decision can’t and shouldn’t be made on her behalf and that he doesn’t actually want to know the outcome (though he’s an optimist, hoping for the best). Trivia: Justin Hartley (Jake) and Sofia Pernas (Tammy Jean) are actually real-life husband and wife…

There’s no sign of Janice Calavicci this week, except in huddled conversations at the Project, but there are two aspects that do mark some forward momentum. We finally get ‘Magic’ Williams (Ernie Hudson) filling in some of his backstory and confirming the details that we already really knew: he was someone into whom Sam Beckett leaped years before (during the Leap where Sam was in Vietnam and trying to save his own brother’s life). Magic confirms that he was aware of a strange experience  (like someone nudging me through a door and me accepting it) and several lost days in which his platoon was saved, but never quite knew quite how to explain the events and that when he rose through the ranks he found his name was in the files of the now defunct Quantum Leap project and put it all together… and used his influence to restart it.  The original series was a little inconsistent about what people remembered when they swapped places (sometimes nothing, sometimes more). But this feels the nice middle-ground. The fact that the series uses old footage from The Leap Home Part Two – Vietnam episode (though, interestingly none of Scott Bakula in action) and Magic seems to know what happened in the original timeline (he and his whole troop were wiped out before Sam changed things) both seem interesting narrative or just pragmatic choices for this new version.

There’s also the moment, just as he Leaps again that Ben finally puts the pieces together and realises that the fiancee waiting for him back at the Project is none other than Addison herself.  It’s one element of the premise that the show’s Powers that Be didn’t want to drag out too long, but it will be interesting to see if Ben remembers that as a constant in all subsequent Leaps.

The episode is directed by Rachel Talalay who has most recently been dealing with a different variant of time-travel on the other side of the Atlantic with Doctor Who and she does a fine job here with so-so material. Though the ratings remain concerning (less than last year’s Average Joe which got cancelled), the show does have the nostalgia factor in its favour (and now a confirmation of a back-end order that will take it to the full-season order of eighteen episodes) so there’s still time for the show to start building rather than gliding. Given that green-light for additional episodes – and having now established a baseline –  the new show really needs to be flexing its muscles and starting to take some risks that the man-out-of-time/looking backwards premise itself promotes… away from the predictable and familiar Leaps emulating past pick-n-mix missions. Let’s see the covering of issues that have changed dramatically over the years such as race, sexuality, social unrest etc… and maybe more complex locations (we’ve already gone to space). Imagine something addressing a Black Lives Matter, #MeToo, COVID or 9/11 – the list is endless and should be seen for the rich seam that it could be.

For the moment, the episode finishes with a teaser for where Ben’s next leap will take him. It appears to be another apparent Leap outside his own lifetime (1879 according to the next week trailer) so it will be interesting to see if this is a wild, wild, west type of hokum akin to Back to the Future III (want to be there’ll be references?) or something more. 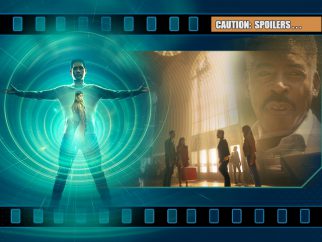 HOTD’s ‘Last Supper: ‘Lord of the Tides’ runs out of time to reconcile…