HOTD’s ‘Last Supper: ‘Lord of the Tides’ runs out of time to reconcile…

As Viserys' health fails, he makes one last attempt to heal old wounds and bring his family together... but will it work?

Seats of power are in the frame on several fronts. Lord Corlys ‘The Sea Snake’  has been caught in a pirate ambush and is believed to have been mortally wounded. While definitive word is waited on his survival, the question of who would inherit his influential and pivotal seat if he dies is brought back into question. Will the title and its benefits go to his grandson (and Rhaenyra’s son Lucerys ) as he decreed?  His brother Vaemond, knowing full well that the grandchildren are not of true Velaryon blood, seeks to challenge that – and is willing to take his demands to the halls of Kings Landing if necessary.

In Kings Landing itself, King Viserys is barely clinging on to life, a shell of his former self but still aware of how fractured his family remains. He has one last wish – to see them reunited and working towards peace and stability across the realms. Can Rhaenyra, Queen Alicent and their children put past tribulations aside or will the struggles for power continue to spill over into the next generation?

It’s a good job that HBO Max is ad-free because there’s currently a feeling that if there were commercial breaks, House of the Dragon would likely replace its main cast every fifteen minutes. Yet again, the show has a significant time-jump that necessitates the recasting of key younger figures into older bodies and anyone paying less than 100% attention will likely have to pause and rolodex through their grey matter to align the new faces with their old characters. It may all be necessary to make this back-story speed along to the more settled main events of the source-material tome, but it does continue to test the loyalties of viewers and it might have been a far better idea to expand the scene-setting for a whole season and begin anew in its second rather than this disjointed narrative.

Paddy Considine, a consummate and talented actor has had the task of playing a king of deteriorating health for many weeks (years in the show’s time) and in this, his final episode, he cuts an ever-more tragic figure, his body barely hanging together and his revealed face less healthy than some Walking Dead extras. (Though plaudits to the VFX department for that wholly-convincing hollowed out eye socket). It’s really his episode and he owns it completely. Though there are some isolated moments when he looks like the Dungeons & Dragons animated ‘Dungeonmaster’ character made semi-flesh, the general art design here is otherwise superb, a half-face golden mask hiding his visage, prosthetics maligning the structure of his skull and the actor using every inch of strained physicality to make Viserys a crippled man who is holding on to life for only one purpose: to bring his family back together before he leaves. It was a creative decision to play out his staggering walk to the throne in the episode’s most memorable moments, in real time, but it is in these quieter and still powerful moments that the show makes its mark.

More kudos must go to those VFX artists and the speed of editing for the rendering of a shock moment where Vaemond Velaryon, seconds after declaring the princes bastards and Rhaenyra a whore… gets his head sliced off by Daemon- not even at the traditional neck but at a sweeping acute angle – catching both he and the audience off guard and creating a sharp intake of breath. Given that Viserys has shouted out “I’ll have your tongue for that…”  there’s even a humorous pay-off with Daemon sheathing his sword  and musing: “He can keep his tongue…” before slinking off.

But every character has something of a moment in this chapter. Rhaenyra (Emma D’Arcy) has some genuinely tender scenes with her father, some telling, well-acted moments with  Rhaenys (Eve Best) and second-thoughts about the role she may be forced to play as the future Queen.  Daemon, sword-slicing aside is doing what he does best, watching from the wings and planning accordingly. Alicent shines as the troubled queen, moving between disgust for how her son treats others to pragmatically paying off the maid he raped (and showing a form of victim-gaslighting that endures in the real world), to wanting to secure the rights of her children against the machinations of others while still clearly mourning the friendship she once shared with Rhaenyra. However it’s her misunderstanding of Viserys feverish death-bed mutterings regarding prophecy that will likely cause more mishaps and danger in the events that are to follow.

Eve Best’s Rhaenys, the wife of Corlys and the woman passed over to be ruler all those years ago, quietly holds the key to what will happen in both the Velaryon and possibly Targaryen lines of succession but her own game-plan is kept close to her chest, not feeling particularly willing to be pressured by either party for their singular benefit. It’s one of those roles and moments where you realise an underused character is going to be pivotal in shaping whatever happens next – for better or worse.

The younger members of the cast show they’ll be just as much troublemakers as their parents, legitimate or otherwise.  To be fair, Rhaenys’ sons Jacaerys (Harry Collett) who should be in direct line to the throne after his mother, is trying his best and looking after his younger brother Luke (Elliot Grihault). Equally, Daemon’s daughters Baela (Bethany Antonia) and Rhaena (Eva Ossei-Gerning) seem reasonable people so far. (Though this is Westeros, so we’re grading on a curve). Aegon – Alicent’s son – played previously by Ty Tennant and now by Tom Glynn-Carney – is growing up from a petulant, sullen child to an equally-indulged young man and rapist. Aemond, (for those keeping track: second son of King Viserys I Targaryen and Queen Alicent) whose eye was sliced out last week is now a dangerous, entitled fighter with his eyes (or should that be singular eye) on a prize that he won’t let Jacaerys or Luke spoil for him. There is a nice moment where Aemond and Daemon share a glance and it’s clear from the unspoken exchange and similar appearance that Daemon sees his younger self in him. 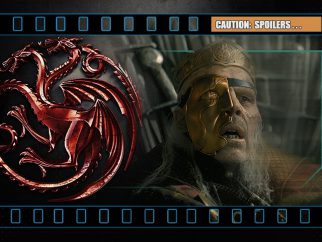