The walls have eyes, ears... and teeth in a Hallowe'enish entry of 'The Walking Dead'...

As the long-lost Connie and Virgil seek to escape the pursuing mob of the undead, they think they might have found salvation in an old house. But even as the zombies circle outside, Connie begins to sense there’s something off in the house. She can’t hear anything, but she can sense it. Is it merely exhaustion and paranoia, or is there a far more deadly threat within the house itself?

Meanwhile Daryl has to go to extreme lengths to protect his friends from the Reapers’ search party….

It’s tempting to think that the latest season of The Walking Dead was launched way earlier than originally envisaged  (it arrived in August rather than the traditional October) and if that’s true, then it would be very easy to have seen the latest episode pitched as the show’s de facto Hallowe’en entry.

For a series about zombies, the horror motif is in place every week, so it would normally be hard to distinguish between a ‘normal’ episode and a seasonally horrific one but On the Inside, though it once again splits its stories – following more than one location and set of characters – gives us the closest thing to a haunted house and traditional spookiness than you’d usually see.

Connie (Lauren Ridloff) and Virgil (Kevin Carroll)  have been gone for some time. Connie, we realised a while back, had survived being buried alive due to carol’s actions when they were fighting Alpha’s horde and Virgil had survived his encounter with Michonne and gone looking fore redemption. The unlikely pair met on the road last season in a ‘teaser’ scene but little had been revealed since. On the run from more of the undead, they now  stumble on an isolated building and for a while it seems as if they might have found a temporary sanctuary. Connie, despite her lack of hearing, is far from convinced that they are safe inside – and, of course, she’s right.

The threat in the house – literally within the walls – isn’t quite the undead, but they might as well be… these rancid shadows of humanity might have heartbeats, but their form is skeletal and their minds are long gone, cannibalistic ‘survivors’ existing like refugees from some notorious slasher flick, Wes Craven outing or Blumhouse film rather than the usual apocalyptic scale. There’s some smart direction (courtesy of veteran Greg Nicotero) and editing as Connie and Virgil try to locate their unseen adversary/ies and then avoid it/them – whenever we’re with Connie alone, there’s no background sound, for the first time plunging us into silence and giving the audience an idea how it must be to survive in Connie’s world. That allows some unique scares, seeing someone/thing creeping around and advancing on our heroes without them noticing actively makes you want to shout ‘Behind you!‘ At other times you’re quietly offering up a prayer that they don’t kill each other by mistake – and the blade-through-the-wall, narrowly missing Connie’s is a great image, as is her scrawled message ‘Not Alone‘ carved into a painting. The house-dwellers were well-realised in both look and movement and it’s little surprise to find out that some of them were dancers. The scene where Kelly (Angel Theory) and Connie finally unite is a powerful one, even without words.

The other main story-strand sees Daryl on a team of Reapers in search of Maggie and Negan and doing his best to make sure his friends are not found. It’s a careful game of cat and mouse, initiated when Daryl has to torture one of his own (Glen Stanton as Frost) to protect his ‘cover’ and get the Reapers pointed in the vicinity of the real safe-house without actually pinpointing it (a vain attempt to save Frost’s life).  The torture is an unpleasant scene to watch in and of itself and Nicotero doesn’t hold back on the visceral blood and pain, but as a piece of drama and things going unsaid, it’s all well played by Reedus and Stanton. As with the haunted house, the subsequent search plays with sleight of hand and ‘lucky’ moves where you think something will be discovered or revealed but isn’t. It’s a little contrived in that ‘luck’, but the tension works well. 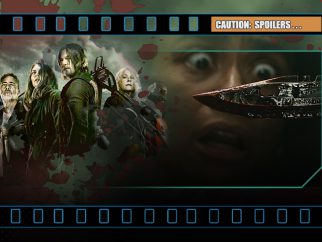