The Commonwealth soldiers are looking for Eugene, but it's Aaron who finds something unexpected...

Hornsby may be languishing in a cell, but his operatives have let loose the undead on the Commonwealth and though there’s not enough to become an ongoing problem, the casualty list is mounting. With her son already one of the victims, Pamela Milton is not only out for retribution but also needing a way to maintain her position.

The people of the Hilltop, Oceanside and Alexandria had been guaranteed safe-passage but with the aftermath of the Founders Day events, Pamela is in no mood to hold to her promises. She demands that Eugene and Max are found and determines that there must be a very public price for their actions…

Pamela Milton wants to keep order (and her powerbase) by just about any means necessary. In her eyes, her son was deeply flawed but she would have protected him at all costs. Now Milton is torn between the questionable services and insight that the duplicitous Hornsby might still be able to offer and her contempt for him. She may blame Eugene and Max for the tape played at the Founders Day event, but already feels Hornsby’s own hand in the circumstances surrounding the undead’s entry into the city. Hornsby’s pleas don’t fall on completely deaf ears, but they do fall on a cold heart. She locks Hornsby in a cell with an undead Sebastian telling him he’ll have to fight for his life – fully expecting that Hornsby will likely perish in a poetical demise.

Of wider importance, the deal that Carol struck with Pamela Milton is now very much imperiled and it appears that many of our survivors are starting to be ‘disappeared’ from the streets and Milton tries to restore order in her favour.

Mercer (Michael James Shaw) seems to be stuck between a rock and a hard place, or – more accurately – between his job and his growing reservations about the state of the Commonwealth. Others are revolting against the corruption and Sebastian’s behaviour, but Mercer feels the need to maintain order and to largely follow the directives given… up to a point. His method is to keep on the path of least resistance, aware that for all its faults, the Commonwealth largely makes it easier for people in its borders than those without its protections.

He also wants to protect Max who is, after all, his sister. His established moral compass may be wavering as he sees the best solution is to do what he can for Max while personally blaming Eugene for much of the turmoil (even though it’s largely the other way around). But as we see at episode’s end, Eugene has not only handed himself in to authorities, he’s making sure that Max is seen as innocent (or, at least, protected from the main thrust of the Commonwealth’s wrath. That stance is likely to play into Mercer’s allegiances, seeing how much Eugene genuinely cares for Max.

Of course, Mercer has been in a relationship with Princess (Paola Lazaro) and now she can’t find a way to stay with him if he’s going to act against her friends. There’s a powerful moment where she explains her history – how so many people in her life have let her down, how she has so often settled for far less than she deserves and how she’s learned the cost of stepping up or not stepping up in moment’s of crisis. It’s a key-note performance from a recently underused character and may also play a part in Mercer’s loyalties to come.

There’s another memorable moment where Eugene determines to go looking for Max and hand himself in if necessary. Daryl points out that that will not serve to help the situation and bars the way. Eugene threatens Daryl with fisticuffs if he doesn’t step aside. It’s a tribute to the actors that a scene that could have been solely played for laughs because of the ridiculously uneven nature of such a bout to it, allows both Reedus and McDermitt to lean into the desperation of the moment and the characters’ friendship.

However, the biggest water-cooler moment in the episode is actually well away from the Commonwealth city. Aaron (Ross Marquand), Jerry (Cooper Andrews), Lydia (Cassady McClinchy)and Elijah (Okea Eme-Akwari) are on the road back to Oceanside but an stuck cart and a ankle injury for Jerry mean they end up laying low on the set of an old Renaissance Faire courtyard. They figure the walls will keep them safe, at least for the night. They’re wrong. Almost impossibly, Walkers gain entry into the courtyard forcing the group to flee into the faux-battlements but then, presuming a perilous safety, they nearly miss one of the walkers climbing to get them. Aaron suspects it’s a lone Whisperer survivor hiding under fake-rotting flesh, but – no – it’s the real deal. There have been rumours of walkers that were able to get through doors and small obstacles, perhaps retaining some primal muscle-memory beyond the usual slovenly gait, but this seems to indicate some sort of intelligence, even if it’s still on a base-level. This possible ‘variant’ shakes the group to the core… are there really different levels of the undead out there or is this some sort of fundamental change?

Expect this question to be revisited whether it be in this series or one of the announced spin-offs heading our way. 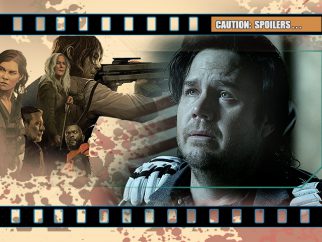