There's a gun-slung Leap to the Wild West for Ben, but far wilder leaps in logic back at base...

It’s 1879 and Ben has Leaped into the body of  Diego De La Cruz (Alberto Manquero) a retired gunslinger summoned to the town of Salvation by his granddaughter Valentina (Natalia del Riego) who has told the townsfolk that he will save them from a group of outlaws that are planning to ransack the town. Head outlaw Josiah McDonough (William Mark McCullough) had made it clear he’ll take the town with or without the people, though he’d prefer it if the community just cleared out.

But Ben isn’t a gunslinger, in fact he’s never held a gun and is determined to find a peaceful way out of the predicament. However, details from this far back in history are scarce and when Josiah kidnaps Valentina and forced a duel at High Noon to rid the townsfolk of any last hopes, it appears Ben has run out of time and trigger warnings.

Meanwhile back at the Project, a nosey congresswoman is trying to work out what the team is hiding and may jeopardise its future…

One of the key guard-rails of the original Quantum Leap was that Sam Beckett could not Leap outside of his own lifetime. The in-story logic was fuzzy but it stopped both Sam taking actions that might have arguably affected his birth (paradox!) and – more pragmatically – was a good reason that the limited budget didn’t have to undertake expensive locations and events.  The 1960s? Fine. Ancient Pompeii – not so much. There were exceptions, but they were rare and limited to ‘sweeps’ period.

It hasn’t taken long for the new incarnation of the show to do away with that restriction (all down to the apparent re-coding of Ziggy before Ben made his sudden exit… and which is currently acting as Quantum Leap‘s version of the sonic screwdriver – an in-story element that can instantly explain away anything going a little ca-ca). Ben already Leaped into the 1970s last week (which, to my own horror, is apparently outside Ben’s lifespan) and now he’s ended up in the wild, wild west of the 1800s. On one hand this extension to his chronological bungee cord spins out an event horizon of possibilities, but it may also open up a huge can of worms the original side-stepped.

But let’s judge the latest episode on its own merits…

I’ve really wanted to like this new incarnation of Quantum Leap, but the fifth – and so far the weakest by a good lightyear – episode doesn’t make it easy. Salvation or Bust is, unfortunately, less of the former and far more of the latter with so many fault-lines and frankly lazy connective tissue that it might well have felt pretty inexcusable three decades ago.

Ben finds himself in the body of an aged gunslinger and the appointed saviour of the old western town of Salvation. The town is supposed to be a healthy mixture of cultures and diversity (and it’s true that Hollywood movies rarely provided an accurate view in that regard) but given that all the supporting characters are paper-thin archetypes given to vague platitudes – having a black madam, a black gunslinger and  a multi-ethnic selection of townsfolk of different descents really doesn’t feel like any more than a checklist.

Ben remembers he’s a pacifist, which is a noble stance but not much use to a gun-fighter training for a duel to the death. After a number of set-backs and humiliating attempts… with ex-military brat and hologram Addison failing to get him shooting straight, he eventually comes up with a ‘Let’s put the show on right here…‘ solution in which the disparate members of the town all bring their separate talents together to catch the bad-guys in a trap. Unfortunately it’s a scheme that is one-half Scooby Doo, one half The A-Team. Ben even manages a ‘I love it when a plan comes together…‘ reference which is a little weird given that, given his age, that show was pretty much done before he grew up.  Even the direction and choreography here is sloppy with countless scenes in which Ben is wandering down Main Street or in the saloon blatantly talking to Addison with people passing by and not a single one of them wondering ‘Who’s he talking to?‘ About ten minutes in there’s even a shot of Ben walking in front of signs are reversed (clearly the plate’s been flipped?).

There may have been a reported $150K spent on importing dirt for the episode, but the am-dram clothing efforts add nothing to the exercise and would make the far more authentic synthetics of Westworld flinch in despair. The outfits look exactly that: walked straight out of studio costuming… vivid, pristine, clean, pressed and obligingly colourful in a way that such a backwater, dusty town would never provide time for.

Back in the future (our present) things aren’t much better. Addison relates to Magic (and the viewers) the repeated potential problems with Ben remembering too little or too much in yet another scene of exposition. There’s also an abrasive congresswoman Kavita Adani (Farah Merani) who has decided that now is an excellent time to visit the Project and confirm her suspicions that the team is up to something. That leads to a series of interactions with the team which sway bluntly between snark and exposition.  Addison keeps to two-word answers, Ian tries to *blink-blink* charm their way through it. We learn through one of those awkwardly inorganic speeches that begin with ‘As you’re well aware…‘, that Jenn Chou (Nanrisa Lee) used to be a hacker until Magic vouched for her. This is one of those crazy tv-world leaps of logic in which a person can be a streetwise felon one minute and the official ‘Head of Security’ at one of the government’s most sensitive operations the next. In some cases you just have to roll with it, but it’s become such a trope and it’s delivered in such a cringe-worthy info-dump manner that it positively creaks. Jenn then casually ferrets around the interwebs and conjures up some in/convenient, damning background info on the senator that Magic can use as a ‘nuclear option’ to stop the senator. However, he decides to use it not to blackmail her, but as a wedge – promising the senator that the Project is so far along that they might be able to Leap into the past to save her dead brother who died in a car-crash. It’s a dubious and somewhat amoral ‘Hail Mary’ that’s obviously going to come back and haunt him and will likely make Adani a recurring and annoying generic bureaucratic threat.

We leave proceedings with the shock revelation that there’s someone else in Salvation that appears to know Ben’s true identity. A figure we’ve never seen before grabs Ben and warns him about pursuing him through time… just as Ben Leaps again. (One intriguing question: If he thinks Ben is following him, has this character actually appeared in other forms in previous episodes?). The general speculation is that this is a variation on the ‘Evil Leaper’ concept, the controversial story-arc brought in to later episodes of the original show. One hopes not as it’s a bit early to use this as a go-to unless it directly ties into Janice Calavicci’s attempt to set up her own Imaging Chamber… and no-one here thinks Al’s daughter’s truly a bad guy, right?  The original Quantum Leap built up its credentials before any kind of genuine external threat to the project and the new QL should probably spend more time exploring the innate potential of its core remit before relying on adding more quirks and stunts. Otherwise, the fact that it has a full-season pick-up may be eclipsed by the lack of a requisite leap in ratings (in fact, this week, seemingly equals its lowest figures).

Next week sees Ben Song make the Leap into the 1980s San Francisco earthquake in an entry which was originally going to be the pilot episode for the show and has been tweaked to fit into later in the run.  That doesn’t really fill one with confidence of putting things right… 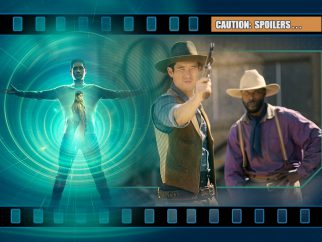