In the wake of Laena Velaryon's funeral, there's a watery wake at Driftmark - but what else will surface?

Lady Laena Velaryon is dead, killed by her own dragon by her command. But the aftermath of the event will cause more ripples and waves at Driftmark. As the many movers and shakers of Westeros gather to pay their respects, family fractures are about to widen. Yet it is also a moment for unions – those unexpected and those foretold.

“Fire has such strange power. Everything that House Targaryen possesses is owed to it, yet it has cost us both what we loved…”

“Perhaps the Velaryons knew the truth of it: The sea is the best real ally…”

In, oh so many ways, the latest episode of  House of the Dragon is the ‘mourning’ after the knight before.  Like any wake – fictional or not – there’s the tendency of the gathered people to remember the person who has died in solemn contemplation but also see people they might not have seen in a while (nor would want to) – perhaps in a less quiet way. It may be less happy, but in many of the above ways, it’s like a wedding.

And we all know how weddings go in Westeros.

If last week’s episode was laden with fire, this episode feels besieged in water. All of the story, directed by departing show-runner co-showrunner Miguel Sapochnik (who also helmed last week’s episode), takes place at the damp, isolated Driftmark castle (hence the name of the episode) home of the late Lady Laena Velaryon (Nanna Blondell) whose body is being committed to the sea in a memorably austere service after she was burned alive by her own dragon in a devastating suicide. In that previous entry, resident serpent Larys Strong (Matthew Needham) also mercilessly arranged the fiery death of his own brother and father at the family fortress of Harrenhal.  The great and the good mingle in Driftmark’s courtyard and battlements as Laena’s body is returned to the ocean in an ornate coffin… one that sinks to the depths to join her ancestors and the whole area bristles with unresolved tensions of all kinds.  You almost have to pity King Viserys (Paddy Considine), an ever-frailer king as he gets older, but also torn between warring factions of the family that seem determined to get their own ways often at their own expense.

Corlys Velaryon (Steve Toussaint) laments not just his daughter but the long-standing frustration he has that wife Princess Rhaenys Targaryen (Eve Best) was not named Queen when Viserys was chosen instead and Matt Smith’s Daemon sits silently taking in the quiet chaos and making plans of his own. Later he and Rhaenyra (Emma D’Arcy) set out across the midnight beach to discuss their tangled path and imminent future. It ends with them consummating their forbidden passion (remember, they are uncle and niece, so ewwwww, but probably a minor transgression given the attitudes of the time and place).  A significant chunk of the episode and its machinations are set at night but though anyone with a technical eye will realise it’s largely the work of altering daytime filming with lenses and post-production, it’s still a little hard on the eyes despite the high-definition.

If the adults should know better, it appears the next generation could be just as much a handful. It can be hard to keep up with whose off-spring is whose, but essentially, we have a war of more than words between the various bloodlines with some hard truths and blows. There’s been signs of the tensions between them before but this time Aemond Targaryen’s (Leo Ashton) lays claim to Laena’s ancient dragon and incurs the wrath of Lucerys (Harvey Sadler) and Jacaerys (Leo Hart) who you’ll remember are actually the result of Rhaenyra’s long-standing, secretdalliance with the now crispy Harwin Strong (Ryan Corr). That reality has only been uttered in whispers, though anyone with eyes can see the lack of white-hair as a giveaway. The conflict between the children leads to rocks and knives and Aemond loses an eye.

It’s for this reason that Alicent demands overt retribution against Rhaenyra’s branch of the family , even if it has to be at her own hand. You almost have to pity King Viserys (Paddy Considine), an ever-frailer king as he gets older, but also torn between warring factions of the family that seem determined to get their own ways often at their own expense.

After the seething resentments boil over and wholesale murder is only just avoided, there’s still a few twists of the dagger to watch.  House of the Dragon tends to toy with our affections and loyalties, often making its key characters make difficult decisions or/and putting them in awkward situations. Rhaenyra does that more than most and towards the end of the episode and even Rhaenyra‘s most loyal viewing audience are likely to have an intake of breath and start drawing a line over what they condone… as she seems to suggest that killing her current husband is a way to clear Daemon’s way to marry her and reaffirm their joint right to the throne. Given that she’s just had a meeting with husband Ser Vaemond Velaryon (Wil Johnson), a heartfelt head-to-head where they seem to be at peace with each other and their roles, it feels like a cold, cruel and unforgivable plan to kill a relative innocent for her own gain. (But,again, this is Westeros!). However, there’s a sleight of hand at work, a parting shot for those who might have been withdrawing any sympathy. The apparent death of Vaemond – particularly cruel as his body is found in the fireplace, burned like his sister – turns out to be a ruse, with Daemon funding Vaemond and his boyfriend Ser Qarl Correy (Arty Froushan) an anonymous escape to other shores where they will be far out of the way and presumed lost.

Perhaps easier to watch than recount, this is the kind of elemental double-dealing and ill-advised familial-feuding and bonding for which the franchise is famous. It’s lovingly shot (some great dragon-flight work) and well-acted and it almost erases the awkward time-jump that lost the show some major talent but replaced it with strong contenders… 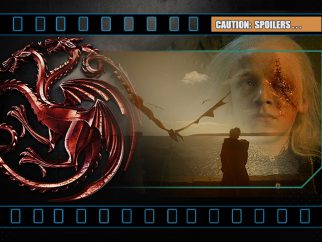