There's trouble inside and outside the Commonwealth as the Miltons' hold starts to crumble...

In the wake of revelations about the less pleasant side of  the Commonwealth, some of its citizens have become restless and protests have sprung up around the city. As Pamela Milton refuses to acknowledge the culpability of her son Sebastian, she authorises actions that could end or inflame the situation further.

Outside Hornsby is still searching for Daryl, Maggie and the others as they dodge both his patrols and walkers across the ruins. But they begin to realise that if Hornsby can get word to the Commonwealth he’ll not only bring reinforcements but likely use their children as leverage.

As, back in the city, Carol discovers Sebastian’s hiding place, she considers a deal that might not be perfect but could solve two problems at once…

And so, here we are, The Walking Dead‘s marathon run now in its closing mile – the final eight episodes now playing out through October and November and paving the way for a crypt-full of spin-offs as stories conclude and the cast splinters out.

In a pattern that’s apparently going to be continued through these remaining episodes, there’s something of a montage of key moments from past seasons  to start things off – with Judith narrating and lamenting the comings and goings throughout her life.  It’s a nice callback and some of the changes in characters’ looks are notable, though one wonders if they’ve been included merely because of the ‘ending’ of the show rather than legitimately tying into proceedings in a more organic way.

Given we’re so close to the end, Lockdown doesn’t feel as urgent as it might. It’s all fine – there’s the usual mix of walk and talk and satisfying hack and slash – but it feels more like a decent, standard bridging episode of the main run, an entry to move a few characters around ready for more important moments later and resolve some of the immediate dilemmas we left everyone with last time. Despite having been gone only a few months, it does takes a few minutes to catch-up and remember what is being done to who and why – and it’s mainly along the lines of the imminent troubles facing those inside or outside of the Commonwealth. (Except… the last season closed on Hornsby possibly about to kill everyone at Oceanside – it all resting on the spin of a coin and there’s absolutely no mention of that when we return, with Hornsby back hunting our heroes again).

Outside: Josh Hamilton as Hornsby continues to make a great boo-hiss villain, the kind of contemptuous character that sneers and scoffs and believes their own hype and somehow – for the moment at least – seems to be able to out-manouever the good guys. He spends most of the episode barking orders at his soldiers and dodging bullets from Daryl as he tries to corner Daryl, Maggie. Our survivors try to both stay ahead of him and  stop him from getting more troops from the city. They’ve also got to get word back to their friends in the Commonwealth’s main city about Hornsby’s extra-curricular activities and their cost but first they have to survive.

Most of our heroes’ faces are known to Hornsby, but as Daryl notes, no-one has ever seen Negan and thus he’s able to provide a suitable distraction – and the episode’s most kinetic moments in a car-chase as the troops are caught between a RV and a hard place.

Inside: There’s a great deal of political chaos as the people of the city start to demonstrate against the Miltons, following Connie (Lauren Ridloff) and the paper’s printed revelations that Sebastian (Teo Rapp-Olsson) killed several of the citizens by blackmailing them into going to a nearby estate to raid it for treasures (you’ll remember that Daryl and Rosita only just survived but the previous lone survivor April became undead lunchmeat.  April has become the face of the mini-revolution, but it’s still largely a case of a vocal minority that are protesting – but it’s growing fast. They are angry but peaceful so far, yet everyone’s exchanging awkward glances.  Though there’s a genuine threat of walkers breaching the outer areas of security, it’s used as a convenient way to corral the protestors away which makes things just a little easier to handle for Pamela Milton (Laila Robins). She is somewhat blinded by family loyalty to entitled progeny Sebastian  but Carol managing to find the errant douchebag manages to parlay that into a possible way to make Pamela swing against Hornsby’s current course of action. It’s interesting that the show – like the comic – makes us wonder about Pamela’s culpability indicating that she’s not as in control of events as she’d like to think. She’s not so much a  cackling bad-guy but a compromised individual blinded by the small powerbase she has and the political experience of the old world and able to assess the best course of action and to use the opportunity for self-preservation. She’s used to rising above things with a deniability that might  work in the short-term but not work as well as things further deteriorate around her.

Connie’s newspaper article that ignites the protests also feels a little weak… the Commonwealth walks that vague line between a free-society and the illusion of one. Milton’s position is kept intact by allowing enough freedoms to stop the populace demanding more, yet using the military to keep anything from being painted outside the lines. While rogue newspaper printing has been a historical tool for revolutions, one wonders if it could exist here – and be circulated – quite as quickly as it is and with the citizens rising to a certain level of discontent.

As noted, the end is in sight, but whether The Walking Dead will race to a climax, meander through social-political conundrums or merely continue through these last episodes in the same way as it’s tackled many of its later seasons (a wash and rinse of various antagonists threatening and then being beaten) remains to be seen.  The comic itself finished  with the Commonwealth story involving a different make-up of survivors and then a brief (but significant) leap forward. Given the different characters in the cross-hairs and the existence of those spin-off shows, one wonders what kind of ending we want, need or deserve. Will a comma or a ‘…’ suffice? 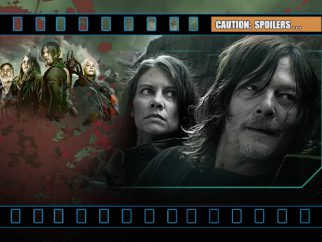 Outside the box? Quantum Leap’s developments begin to ring a bell….