Outside the box? Quantum Leap’s developments begin to ring a bell….

In the fourth episode, there's both lightweight and heavyweight developments regarding the project...

October 2nd 1977: Ben has arrived in the body of championship boxer Danny ‘Youngblood’ Hill and proceeds to get knocked to the canvas by a blow to the jaw. That’s not a great start as Danny is supposed to be fighting for the title in just two days’ time – a fight he originally lost.

But is that the only reason Ben is there? Addison pieces together another reason, but there’s little help from Ziggy? Why is the super-computer so sluggish and what does it have to do with Janice Calavicci’s own plans?

The glimpse of the next Leap seen at the end of last week’s episode reflected one of the memorable turns from the original era, with Sam/Ben arriving in the body of a boxer and getting a slow-mo right hook for his troubles (eventually used in the opening credits). We pick up, this week, around the same moment for Ben and it’s not long before we get some idea of why Ben is there. The boxer is Danny ‘Youngblood’ Hill who history says lost his boxing match after being inexplicably distracted during the second round of his late 70s bout in Vegas. It seems a fairly lightweight reason to Leap in and change things, but the revelation that it’s not just Danny’s relationship with his rival’s girlfriend (which caused the distraction…  yet remains pretty undeveloped in the episode) but the fact that Danny’s brother/trainer’s life that in the balance, adds to some pertinent questions as to why Ziggy didn’t spot that connection to begin with….

Why is Ziggy sluggish. We get clues later… the computer’s being actively hacked. As predicted we do get some more of Susan Diol as Beth Calavicci, Al’s widow, whose home seems remarkably okay given last week’s basement-evidence-destroying mini-explosion. Estranged aughter Janice (Georgina Reilly) turns up at the house wanting to go through some of Al’s ‘mementos’. It turns out it was Beth, rather than Hebert ‘Magic’ Williams (Ernie Hudson) who actually prevented Janice being part of the continuing Quantum Leap Project because of concerns that she was too obsessed, something that makes Janice pretty miffed. She drugs Beth’s  afternoon tea (with something that gently makes Beth swoon to the floor rather than dramatically collapse) and gets what she needs.

The ending suggests that Janice has taken the original Ziggy hand-set for far more than sentimental value and it appears that she’s built a make-shift imaging chamber of her own (she may be brilliant, but does she really have Tony Stark-level smarts and unlimited secret lairs?) With a hacked connection to Ziggy, it’s clear she’s wanting her own connection with Ben and it does lead to the idea that we might have two hologram advisors dueling for Ben’s attention but with different motivations – which would at least be a twist on the format (albeit one that seems like it couldn’t last indefinitely).

One notable aspect of the episode is that Ben is now Leaping outside his own lifetime (a somewhat depressing realisation for those of us for whom it still is!). That was a big deal on the only occasion that Sam managed the feat (then linked to his blood-link to an ancestor), but here it’s noted as an oddity and then explained with a line of script that refers to Ben’s secret reprogramming of Ziggy before he Leaped.

There’s still a fair deal of awkward, expository dialogue throughout – Ian Wright (Mason Alexander Park) and his mention of Ziggy’s rejigged source code seems like a contractual weekly mantra rather than an organic catch-up. (Surely anyone who’s watching knows the basic deal by now). Equally, the discovery that indicates a momentum-gaining pattern of Leaps that will take Ben at least another half dozen Leaps, maybe double that, to complete, feels like a metatextual comment  on how the ratings will affect the story-arc… and again, despite the links to Sam and Al, we know that Stockwell has passed away and Bakula has passed on being part of the reboot, so the mission statement still feels frustratingly askew.

The new show is trying to expand the ‘present’ drama which often seems to be getting in the way of the attention being on Ben’s Leaps. Personally, I don’t mind knowing more about the present… if it’s interesting. The Janice element could go somewhere compelling, but – frankly – the ‘gang’ getting together to watch The Real Housewives of Beverly Hills doesn’t actively get me to like the show more (nor their tv tastes) or feel anything other than cliche.

Ben’s conciliatory skills – being the glue of the team – have already been mentioned before and he certainly seems to be the kind of guy that makes people feel wanted and appreciated… so the fact he brings those skills into play when talking to Danny’s brother (who is suffering severe PTSD) works as an established plot point. Ben’s sudden ‘eidetic memory’ is one of those elements that dramas love to use like a mental sonic screwdriver, a plot-cheat device to enable short-cuts. However it’s reasonably effective here as Addison manages to rerun the original fight so that Ben, already in a body with strength and muscle-memory can quickly and conveniently memorise what he needs to do to stay in contention. It’s a jump of logic, but not quite a Leap.

I want to love Quantum Leap again and right now I merely like it. It’s all in all, a middling episode, playing to the basic strengths of the original run but diluting the effect with contemporary material that’s only edging things slowly forward. The episode’s title is (somewhat bizarrely), Somebody Up There Likes Ben. The question is, this is NBC… a network with low tolerance for low ratings and with those ratings apparently less than Ordinary Joe, the show that occupied the same time-slot last year and was quickly cancelled despite having better ratings than this, will there be enough people down here liking it enough to keep on Leaping? 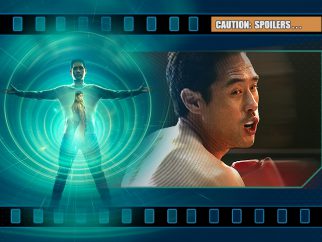