It’s been ten years since Princess Rhaenyra Targaryen and Ser Laenor Velaryon were married, each agreeing to have their private lives very different from their public duties. But the strains are starting to show. There are those who question, with good reason, the parentage of her children and with the king’s health is still steadily declining and the posturing for legacy has not abated.

The decade-length time-displacement displayed by this week’s House of the Dragon – involving shifting powerplays, legacies and some in-your-face recasting – is a major gambit and one that it doesn’t entirely pull-off. Had such a foundational shift happened at the end of a season instead of halfway through its opening run it might have been easier to tolerate, but given that it was only a week ago that actors such as Milly Alcock and Emily Carey were making their characters their own, it’s a hard pill to expect the audience to swallow in what almost veers towards a semi-reboot.

Both Emma D’Arcy (the new Rhaenyra) and Olivia Cooke (the new Alicent) are good in their new respective roles. Cooke feels more organic a fit, an amazing close visual match to her predecessor but D’Arcy’s  interpretation of Rhaenyra has a distinct lack of warmth and a harder edge that makes them feel like a totally different character. Yes, ten years have past – likely hard ones – but that’s an awful lot to be happening off-screen and asking the audience to process it in the moment.

Aside from the change in performers, it’s that massive story shift that doesn’t help proceedings. When we last saw them:  Rhaenyra cut a mostly heroic figure, ruthless when she had to be (this is Westeros, after all) but trying to balance her genuine emotions against her duties as heir to the throne, the closest we had to a sympathetic lead – and she’s now a mother whose offspring have dubious parentage and a schemer with the best of them as her father’s health fades…  Daemon was a whisper-mongering home-wrecker who didn’t think twice about killing his first wife in his efforts to consolidate his regal chances and now he’s a stay-at-home lord, fetted by bored figure whose second wife Laena is about to give birth (is it even his after his stated problems?)…  Alicent, the Queen, is now far more outspoken and empowered and in a near open if still reluctant war for the future of the Iron Throne and whose words quite possibly have fatal consequences for senior members of the Kings Landing court.  Other roles such as Ser Laenor Velaryon (previously Theo Nate, now John McMillan) and Daemon’s aforementioned wife Lady Laena Velaryon (previously Savannah Steyn now Nanna Blondell) are aged up, in some cases, needlessly and after only brief appearances thus far. Essentially it’s asking us a lot to reinvest in the show again, despite losing a myriad of  touchstones.

The episode is bookmarked by awkward posturing and painful childbirth – Rhaenyra gives birth to a third child and when Alicent sends a courtier to bring her the child, Rhaenyra insists on staggering through the castle to show her strength, still grimacing and bleeding from the experience but not giving an inch to those who might take it. It’s only the start of various gambits, purposeful glances and furrowed brows that punctuate the chapter.

The second childbirth trauma of the episode, towards the end, doesn’t end as well – Laena has similar breach problems as the Queen, Viserys’ first wife did in the opener, though in this case, knowing that one way or another her days are numbered, she opts for her and her unborn child to be consumed by her dragon’s fire. Again, Daemon – admittedly, grading on a curve – seems far more affected by this than one would expect of his cold heart, though this may the event that reignites his more infernal fires.

In between, the various Targaryen off-spring  (cousins, half-brothers, it’s so hard to keep up?) are showing some of their oppressive colours and inflicting fraternal ire on each other, hardly unaware of the rumours surrounding them. The most noticeable is the introduction of the older Prince Aegon Targaryen (played by Ty Tennant – son of David and Georgia Tennant) whose self-loving actions on the parapets brings back you’ll-go-blind memories of a certain climactic Homelander scene in The Boys. (So overtly, it seems like a purposeful nod). Elsewhere Lord Larys (an excellent Matthew Needham) who has been an incidental character but squirmed into the Queen’s orbit last week, goes full ‘Little Finger’ in his underhand duplicity and manipulative murdering ways – felling his own family by proxy and may well prove one of the most dangerous people in King’s Landing or beyond.

A perfectly decent entry in the saga, but one eclipsed by the casting changes, this is an uncomfortable episode in more ways than one… 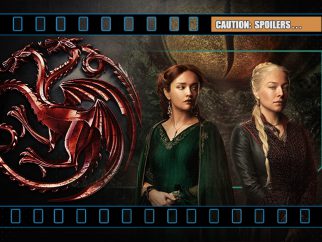 Thrust and Parry: Tolkien’s worriers and warriors start to choose their sides…