From the Gulf of Mexico to the Persian Gulf...the famous 'Interview' gets a transcription and transfusion...

Ailing journalist Daniel Molloy contemplates a life where it seems the scoops and prestige of his career are in the rear-view mirror. But when he receives a letter from an old acquaintance, he risks the perils of the COVID pandemic to journey to a far off land to meet him again. Decades before, Molloy heard the life-story of a vampire named Louis de Pointe du Lac but neither man found the encounter satisfying. Now both men are able to look back and decide to be more honest with each other. So begins the refined process of an old story retold.

Louis is far older than he looks and begins his tale in the New Orleans of the early 1900s where he was a black entrepreneur with desires that did not fit with his ‘place’ in society or what even the Big easy would allow in public.  But his world is about to change, as a French aristocrat makes the city his home and sets his heart and soul on grooming Louis for another role entirely.

The stranger’s name is Lestat and sooner or later, blood will be spilled…

When Hollywood first created an adaptation of Anne Rice’s seminal Interview with the Vampire it proved as controversial as some might expect – and then some. Of all the people on the planet, Tom Cruise was probably the least obvious actor to step into the persona of Lestat, a gauche, tall, lean, intense, sexually ambiguous if enigmatic villain. Cruise was far more likely to play the straight, rigid moral hero of a piece but it was clear that he wanted to stretch himself and take on more complex material. Anne Rice was quite vocal where she stood on the matter – that Cruise was utterly wrong for the role – something that didn’t please the studios who no longer believed that any publicity was good publicity. Then Rice saw the finished cut of the film and with a conversion worthy of a road to Damascus that could only be more effective if accompanied by screeching brakes, she took out a double-page spread in the Hollywood Reporter to wax lyrical on how good Cruise was and how wonderful she now found the adaptation to be. The film went on to be a financial success.

Critics themselves had mixed views. Without doubt the film was luxurious, beautifully shot, the material rich and its scope ambitious. Cruise, miscast or not, was charismatic, Brad Pitt got a key early role that didn’t harm his reputation and a young Kirsten Dunst got a dangerously askew character that made such an impact it launched her in Hollywood.

So as AMC shuffles across from zombies to vampires, a television series of the same material carries with it a lot of baggage from both source material and film. In an era of cable shows defined by the new benchmarks being set on a weekly basis by period-dramas Boardwalk Empire, Penny Dreadful: City of Angels and Perry Mason, Interview with the Vampire  doesn’t disappoint on a visual level. The wardrobe, set-decoration and post-production tweaks help give the on-location filming a real sense of quality and period and contribute a lot to the show’s immediately seductive vibe.

There’s moments of subtle intensity and much time, money and effort applied to tone in this AMC debut… but nothing exactly chaste here – the homoerotic subtext that often comes along with any non-shiny-vampire text rapidly becomes the text itself and quite literally embraced before the end of the first episode (in a seduction scene that might not quite push, say, a Cinemax/HBO boundary but would still never make it to network tv).This version of the story makes Louis (and later Claudia) black, but this only adds to the dramatic possibilities of the eras being covered. Louis de Pointe du Lac is quickly shown as a man of some influence in the New Orleans streets but at war with daylight expectations: his position and desires, even in a city that allows him to indulge them at night, are limited by the colour of his skin and the powerplays above him during the day and keep him from steeping too far from how others perceive him.

British actor Jacob Anderson (best known for his role as Grey Worm in Game of Thrones and soon to be reprising his role as Vinder in Jodie Whittaker’s swansong as Doctor Who) plays Louis and carries much of the narrative weight that will likely catapult the actor’s resume into another league. He makes a charismatic lead, the vampire of the title telling the story of his long life as he slinks around both a modern, sterile penthouse in Dubai and – in flashback – the dusty, liquour-soaked streets of 19th Century New Orleans.  He manages to convey the frustrations of the past and also his world-weariness in the present. The modern city below is one where discretion and anonymity can be bought, but it cannot cure him of his lethargy and his contempt as mankind suffers through the pandemic.

Sam Reid as Lestat de Lioncourt is harder to get a handle on from the premiere. The echoes of Cruise’s interpretation linger in clothing and fluidity of movement but this is a far more guided missile in execution and gallic-goth-to-a-flame in delivery. He certainly has presence and conveys the arrogance and intensity needed for a role that you’re supposed to be repelled by and interested in in equal measure. Lestat is a master manipulator and puppet-master and his grooming of Louis is played out like a sadistic dance with Louis noting, in retrospect, that he was being played by Lestat long before the truth of his origin ever became apparent, or his destiny changed.

Eric Bogosian plays the weathered Daniel Molloy, a once celebrated journalist now professionally back-lit by his past triumphs rather than the melancholic, far older figure he cuts sitting in his own apartment and contemplating the Parkinsons Disease that is starting to be affect his everyday life. He has two ex-wives but clearly has a fluid past in the bedroom as we learn more about him and the very fact that he’s willing to journey halfway across the world to see Louis says something about recapturing the electricity of his work in its prime.

The violence is bloody but like fangs themselves, used best when they occasionally punctuate the story rather than being relied on to carry it completely. But necks are bitten, wrists are severed, bodices are ripped, blood is shed and in one memorable image, a priest’s head is fisted into oblivion.

In many ways this feels like a sequel or consensual reframing of the original material. The story acknowledges that Louis de Pointe du Lac and Daniel Molloy have met before when Molloy was much younger and when the vampire’s tale was first transcribed. However both men agree that the telling was flawed, ambiguous and even untrue in the details and this is an opportunity for the men to do it properly and with the advantage of even more hindsight. On one hand reflection is a great framing device, but the more specific idea of two gay men comparing notes about their societal experiences and regrets also speaks to a particular narrative, allowing the fantastical elements to be grounded in modern sensibilities.

The central homoerotic elements may not be to everyone’s tastes, but as a straight guy watching events unfold, I found enough historical catnip and seductive performances to make this latest transcription and transfusion of the Interview with the Vampire story feel like a worthy addition to the vampyric genre itself and worthy of attention. Viewers will have to make up their own minds with regards to how the AMC series (already renewed for a second season) has changed and added further layers to the source material, but one suspects that Rice – who died last year – would have liked it enough to buy a four-page spread. 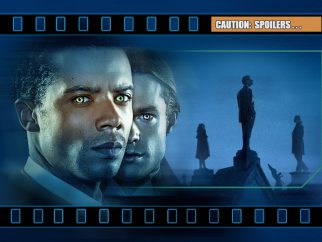