An element of cold revenge in the classic story of warm Christmas redemption...

Ebenezer Scrooge (Guy Pearce) runs his company with a cold, some would say heartless outlook on life and the human condition. In his mind, the ‘hypocrisy’ of the masses is no substitute for his money ledger and he can reduce every decision his made to a justifiable balance of the two. But since the death of his business partner Jacob Marley even the interest he had in squeezing the last drops of profit from a profit-margin have started to fade. As Christmas comes around once more, Scrooge is alone once more…

But not for long. He is visited by Marley, a spectre with a very personal mission and with a vested interest in helping Scrooge find redemption. Scrooge is having none of it – he can explain away even the bad decisions he’s made as anything but his own fault and as pragmatic business. But over the night to come, three spirits will show him his past, present and future and the survival of more than just Scrooge himself will be at stake.

But can some transgressions and abuse ever be forgiven?

There are as many different on-screen versions of Charles Dickens’ A Christmas Carol (first published in 1843) as you could wish to fit into the seasonal holidays and each with their own qualities. It is a tale so resonant to all ages and times that its theme of redemption has managed to entice audiences young and old for decades across the centuries . From Alastair Sims’ memorable 1951 feature, through Albert Finney’s turn as Scrooge in the 1970 musical, to George C. Scott’s iconic 1984 interpretation and the surreal antics of Bill Murray’s getting Scrooged in the 1988 comedy, the whimsical but still sly and knowing humour of the Muppets in 1992  and Patrick Stewart’s one-man stage show and 1999 tv movie…  all are worth embracing and enjoying. In many ways its the King Lear of Christmas stories, the Hamlet of Yuletide.

This year the BBC (and America’s FX) bring us another version of the tale, traditional in some ways, a more risk-taking entry in others. It’s still the tale of an old miser given the chance to change his ways by three ghostly visitors who hart his past, present and possible future, but the tone is much darker and cynical about human nature.

Pearce plays Scrooge with cold efficiency, giving him a stoney heart and a cruel and icy, brittle demeanour, but one that isn’t without touches of clinical logic or reasoning. Charting his journey from caring child to isolationist loner and heartless miser,  we see more of his school days and a likely controversial implication of serious abuse and neglect towards him. Here there’s no traditional Mr. Fezziwig era to display a counterbalance to Scrooge’s growing opportunism and obsession for numbers and ultimately reducing the human condition to cold equations akin to a financial flowchart.  He hates Christmas not just because of the ‘waste’ he sees but also because of hypocrisy… one day to see the good in all – he muses –   yet no inclination to continue such afterwards? He wonders to Bob Cratchit, why there’s no impetus to reverse the holiday:  if it’s so important to be kind and generous, why not do that all year around and reserve one day for the brutal, harder, truths of life?   You don’t find yourself liking Scrooge – and Pearce’s solid performance often makes us hate him – but the pity you feel for his behaviour is slowly more understood as his backstory builds and his weathered exterior cracks.

There’s an adult mood throughout and an intent to turn what has always been an optimistic (if occasionally simplistic) story of redemption into something darker, even in some ways to one of revenge. Depending on your viewpoint you may think it utterly destroys the message or you may feel it adds something new, a layer of connective tissue. Importantly – and to be applauded – this version puts texture to some of the normally overlooked supporting roles and pivots slightly from the straight-forward narrative we know. In particular Jacob Marley and Mary Crachit both get much more attention and their reasons and actions given greater context. Stephen Graham makes a somewhat sympathetic and pathetic Marley who realises his own afterlife fate is tied to that of Scrooge. Vinette Robinson (impressive as Rosa Parks in last year’s Doctor Who) gives Mary some real backbone and poignancy that make this as much her story as that of Scrooge. Even the spirits themselves get more literal meat on their bones as we spent some time with Serkis’ Ghost of Christmas Past in Purgatory ahead of his visitations. It’s interesting – but somewhat uneven – that Serkis has almost double the screen-time of his spectral counterparts (who really don’t appear until the last third of the tale) though Charlotte Riley (as the Ghost of Christmas Present/Scrooge’s sister Lottie) also gives voice to the latter  character who is usually off-screen and Jason Flemyng’s ‘Future’ makes the most of his silent role.

Visually the extensive scenery is effectively crafted and populated and rarely looks like a set or sound-stage – many key scenes being exterior shoots. These are not the safe, quaint streets of old, but ones edged by dread and stylistically captured in all their shadows and flickering lights – occasionally bringing to mind the avenues of Tom Hardy’s Taboo (tellingly, also from writer Steven Knight whose other notable creations also include another period drama Peaky Blinders). Moments of genuine tension and horror work well and a deadly broken frozen pond sequence in the third chapter is arguably more Salem’s Lot in execution than Disney on Ice.

Certainly this won’t be A Christmas Carol in tune with a large swathe of potential holiday audiences and though impressive in many regards it might have done better to have the courage of its impressive  ‘make traditional Christmas ghost stories sinister again‘ remit without the use of some needless scattered profanity that adds nothing to the idea of it dark solemnity except a later timeslot. There’s also an argument to be made that the whole idea of bringing in a cynical darkness and revenge-thread also undermines the singular message of the original piece, stripping away some of the accepted pleasantries… ironically losing its imperative heart in its cerebral musings… but it’s also fair to point out that there are plenty of other versions of the story that keep to the original journey and this could be a counterbalance to the avalanche of templated Lifetime and Hallmark outings.

As darker interludes and interpretations go, the BBC‘s version is worthy of inclusion as much as any, neither the first nor final word on a classic – but one that may speak to the cynicism of the moment as much as the magic of the season, as do all good dramas. 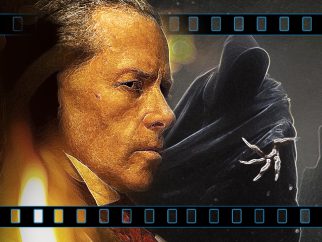