Info-dumps are not drum-rolls. VFX can't hide a mess of motivations in Flux penultimate episode...

The Weeping Angels have turned the Doctor to stone – or rather they’ve encased her for ‘recall’ to Division. But while the Time Lord finally gets some answers about what is happening to the universe, she seems nowhere nearer to stopping it or learning the true extent of her missing memories.

Elsewhere and elsewhen, Yaz, Dan and Professor Jericho are facing a very long journey home from the early 1900s, trying to track down secrets around the globe that point to the day the world may end. Vinder continues his search to be reunited with Bel, but finds Swarm and Azure waiting for him and on Earth, a slippery villain infiltrates one of the planet’s first and last lines of defending the planet…

If there was any doubting that Chris Chibnall was double-downing, even triple-downing on his reinvention of the Doctor Who mythology, rewriting, reordering or just discarding them, then this week’s episode ‘Survivors of the Flux‘  certainly seemed to solidify his intentions if not his full reasonings.  Everything from the Doctor’s origin to some casual references about old supporting characters will likely give long-term fans of the show a headache.

Last week’s cliffhanger was genuinely good, with the Doctor captured by the Weeping Angels and seemingly turned to stone. It was a dynamic moment and a great visual. There were rumours that this next outing would be a Doctor-lite episode, perhaps allowing the focus to explain some of the situations involving the supporting players and their position and importance in the wider-picture tapestry. Nope. Within seconds, the Doctor is fully restored, but en route to Division and still, briefly, a captive in the realm of the Weeping, now Gloating Angels. She gets to spar with them verbally for a few minutes, but a few stony barbs aside it’s just a matter of both sides hurling insults before the Doctor is transported again.

We got a glimpse of Barbara Flynn’s character, credited as Awsok, during Once, Upon Time… though that naming misdirection seems askew as she was never really named on-screen and her real identity is quickly revealed as Tecteun, the woman who supposedly found the child who became the Doctor all those possible eons ago.  But with two appearances by Flynn and Tecteun herself a recent Chibnall addition to the lore, it’s hard to invest in her story before her casual fate is revealed. Jodie Whittaker herself  is being given more to do in this run than her previous two and conveys convincing earnest in her predicament and frustration. However  Awsok/Tecteun and the Doctor’s moral-boundary talk is, frankly, a badly-written mess. On one hand you’ve got the Doctor baulking at an organisation that  defies the Time Lord mandate of non-interference and which  plants itself in the lives and fates of various worlds… which is hypocritical in the extreme from a Time Lord who has spent every minute of her/his life (that we’ve seen over sixty years of stories) doing JUST THAT very nicely, thank you. The Doctor and her spreading of ‘hope’ disapproves of Division’s darker agenda but her own methods are questionable if more supposedly altruistic. Then the conversation reverses…. you have Tecteun saying the Flux was created especially to dissolve a universe where the Doctor ran rampant, but then suddenly offers her the chance to hitch a ride to Universe 2.0 and start again, which is… mystifying. Swarm and Azure may be the ‘big bads’ but once again they just stand around pontificating and then dust whomever gets in their way. They have a surefire boo-hiss factor, but they look far more interesting than they’ve actually proven to date. One episode from the end and they’re less terrifying, more glitterball pantomime… and all we want to do is shout “They’re behind you!!!” One positive point: the Arboretum home of Division (populated only by a single Ood and Tecteun – so a lot of Division Operatives are going to be miffed at being left behind?) is quite beautiful in design and FX work, but it’s a location that’s only there for that ominous conversation.

In what can really only be seen as fun but also epic filler and a budget-bin homage to several aspects of Raiders of the Lost Ark, Dan, Yaz and Professor Jericho  spent the best part of  snippets spread across half the episode – and a quick/long years of their time with only brief beards to show for it  – running across the entire world looking for obscure, ill-defined clues. Tibet, Constantinople… Liverpool. Why? Because the Doctor had apparently slipped a recording into Yaz’s pocket that told her that if they got split up she MUST find details about the day Earth was attacked in the post-Flux future (likely by galactic refugees escaping the Flux) and that Yaz could do so by keeping an eye/ear open for legends, predictions and cultural mainstays. Even die-hard followers must have been left scratching their heads at the the maguffin-like, highly-convenient yet massively-vague recording (one that hadn’t been mentioned before, must have got recorded in the heat of other events and when you’d think there might be other priorities) and encompassing mission.  Don’t the team already know the date of the attack – it happened in the first two episodes? We also know the Sontarans already seized the moment to attack Earth (as per episode two), so we’re suddenly into yet more timey-whimey territory about what’s happening and when and if there are any real consequences to time being messed with from week to week. Is this a clever ‘this is how that happened‘ call-back to the events we saw there..? No, apparently not – it would seem the trailer for the finale suggests the Sontaran offensive merely continues).

Saving a fortune on frequent-flyer miles, the trio’s journey is largely depicted with animated maps, but bizarrely, almost non of the artefacts and ‘clues’ found along the way seem to be worth the trip, providing only a few nice callbacks, prat-falls and punchlines. A bland ancient pot appears to point to 5th December (which is, as things stand the date of the finale’s broadcast) but seems hokey given show our calendar didn’t even exist yet) and, later, a jolly Tibetan monk is essentially a pay-offed joke about gossip –  but her tells them his visions say they must ‘Fetch your dog‘. Suddenly the highly-important world-saving gather-knowledge aspect of their journey is unceremoniously shoved away as they then journey to a rather empty-looking Great Wall of China so that they can paint a message that can be seen from space that Karvanista can spot in the future and who can take them home. Even in the unlikely event such vandalism/message would have survived a century, Karvanista himself points out the bloody obvious – that he can’t travel in time, so it’s all been a bit of a stupid endeavour. So…. while they are arguably the most entertaining, all the Yaz/Dan/Jericho scenes are rendered moot with no real answers about who was trying to stop them along the way and why.  (Was it agents of the Grand Serpent or just another Raiders… nod… it’s never really clear how or why he’d even be aware of them?) It’s only a completely coincidental meeting with  real-life architect Joseph Williamson, the Liverpudlian tunnel-builder that moves the trio on any further and then they still have to journey cross another ocean (using same stock footage?) and to Liverpool to relocate him.  His tunnels are like a Magic Faraway Tree of exits and entrances to other times and places – rich in potential for stories and pulling together strands – but before there’s a chance to use any, the episode reaches that simultaneous Sontaran cliff-hanger.

With so much going on, the most interesting sections of the episode were the scenes involving Craig Patterson’s Prentiss (aka ‘The Grand Serpent’) infiltrating the founding days of UNIT and coming and going through its history as if he weren’t bound by the laws of time. Along the way we see him nudging away various personnel (sometimes mortally) and setting up the Earth for some bad times.  We also see that he suddenly has strange ‘insert snake into adversaries‘ powers which explains his name, if not why we haven’t seen this before during his time with Vinder, but…. he at least makes a classic old-school villain albeit one whose methods feel inconsistent and ill-defined. There’s huge potential here for a larger episode with its sole focus on UNIT and some ‘kisses to history’ – perhaps the original intent of the episode before seasonal restructuring? – but now they largely amount to some casual references and an aside about Brigadier Leithbridge-Stewart that would seem to rewrite his earliest contributions and potentially misunderstands military rankings and progression during the 1960s. (If you’re going to  easter-egg references, bother doing some research? That being said, UNIT-dating has been a thorny issue for the series over the years, so perhaps Chibnall’s doing it deliberately rather than casually?) We do get to see Jemma Redgrave back as Kate Stewart, the first and only living person to recognise Prentiss for the true danger he represents and as she survives an attempt on her life, we’ll hopefully see her again soon.

There’s something for everyone here, but not nearly enough of each element given this season’s scattershot approach nor attention to details. Penultimate episodes are about the huge *gasp!*, raising the final stakes as we plunge into a finale, but it’s hard to get too excited at this point. Info-dumps are not drum-rolls, especially when they add to the confusion rather than explanations. The very end of the episode sees Swarm reaching for the Doctor after ‘dusting’ Tecteun but the tension really isn’t there as it’s almost exactly the same threat as Once, Upon Time‘s ending (which was, itself, quickly derailed, and we know, of course, the Doctor survives). Going in to the final week, there’s far, far too many loose strands to be explained  and the information we got this week was either haphazard or contradictory. We started this run with a universe-destroying cloud of epic proportions and yet that’s proven to be a background feature ever since, a lip-service threat there to casually join a series of dots that might otherwise have floated freely – but not very convincingly. Next week we have a best-of rogues gallery – Sontarans, Daleks, Cybermen, Swarm, Azure (wot, no Master?) – but while their visual teasers look fun, there’s already a feeling of VFX over logic. If Steven Moffat sometimes shrugged away the connective tissue explanations to suit, it’s currently feeling like Chibnall would throw in an alien disguised as kitchen-sink that was really the Rani if he could get away with it. It could still happen.

Any review is, by its nature, subjective and it has to be acknowledged that there are plenty of fans out there who seem to like Chibnall’s style and narrative-direction. There have also, undoubtedly, been some parts of fandom positively rooting for abject failure and reveling in their own weekly pain. However, it gives me no pleasure to simply speak to personal, growing dissatisfaction with the current era. But Flux, while containing all the individual ingredients needed to work (perhaps, tellingly, too many, too diluted and too free-range), is written and paced like overstocked amateur fanfic given a bigger budget… and with only an hour left to go, even the nice nostalgic nuggets thrown from the speeding vehicle and the occasional shiny diamonds in the narrative rough can no longer hide its wholesale limitations and flimsy over-reach. 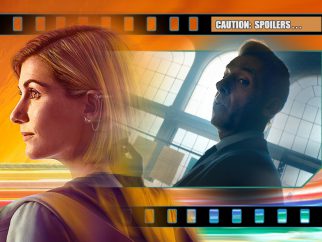