Clint Barton and Kate Bishop are prisoners of the ‘Tracksuit Mafia’ and if that doesn’t exactly put fear in their hearts, it would seem their leader is far more dangerous.

Maya Lopez aka Echo was a child prodigy, overcoming disabilities and turning them into advantages, able to mimic and learn what others would take lifetimes to study. But the loss of her father changed her world and now she’s looking to find the person who killed, a man who went by the name of Ronin. And she doesn’t need her hearing to achieve her aims.

Barton, having his own trouble with hearing-loss, knows the truth behind Ronin but isn’t inclined to tell anyone about his time during the ‘Thanos’ Blip… and now he and Kate find themselves relying on each other just to survive. Can they find common ground or will they have to burn their bridges?

If the only real problem with last week’s otherwise-enjoyable episodes was some uneven pacing, then this third entry (already at the halfway mark of the run!) proves to be one of the most well-pitched episodes of the entire Marvel/Disney+ arrangement to date and bodes well for the rest of Hawkeye‘s run. The question was always going to be whether the latest title could overcome past series’ problems with balance and whether the mixture of action, comedy and drama could  pivot in their own right rather than just continue the MCU branding… and the good news is that it all works well throughout.

Renner, like the script,  is rising to the challenge of fleshing out Clint Barton. There’s breathing spaces between the action and that gives the audience some emotional beats as he deals with his current circumstances and he addresses the very real consequences of putting yourself in the line of fire, even for all the right reasons. The acts he committed as ‘Ronin’ echo down the years and will likely have even more repercussions soon. Clint is reliable and competent, even without his newly-needed hearing aid, but the minute he loses it in the heat of battle, there are certain liabilities. For a show that’s called Hawkeye and not Hawkear (a joke even made in the episode), then the entry pays strong attention to not only the sound-effects indicating a loss of hearing, but also in the consequences of such. ASL (American Sign Language) is getting more screen-time recently (in shows such as this and The Walking Dead), but it’s interesting that the show doesn’t always provide subtitles to all the ‘dialogue’, making the audience experience some of the texture for themselves. Moments of miscommunication between Clint and Kate are played both for comedy and pathos and the show (and both archers) are largely on target for both.  In an episode of well-pitched moments it’s one of the quieter scenes (literally) that truly hits a bullseye when Clint can’t hear his son properly on the phone (and neither can we) and Kate, unbidden, steps in to ‘translate’, writing down the other end of the phone-call so that Clint can respond accurately and so his youngest doesn’t know what’s wrong. It’s a definitive, organic bonding moment between the two heroes and one of the reasons that keeps them together as things get hectic.

Hailee Steinfeld continues to impress. Already an award-winning actor and singer, she brings the right qualities to Kate Bishop, stopping the character’s over-confidence and eagerness from becoming any more grating than it’s supposed to be. She also handles the action requirements well – if she’s going to have the Hawkeye mantle going forward (and one suspects she will), then the quiver is in good hands.

The episode’s action sequences are, frankly, absurd and terrific. If you like Hawkeye then you’re buying into a hero who can shoot arrows with uncanny accuracy and speed, so the suspension of disbelief is already hoisted high. Here, a battle through a warehouse gives us great close-quarter combat which nicely segues into a car-chase that could put a few movies to shame. While there are obviously some genuine roadway sequences, the elements that must logically have come later from sleight-of-hand vfx and back-projection are just about seamless and feel as if you’re there with them rather than merely applauding the technology. You might be thinking ‘How was that done?‘ but most likely you’ll just be applauding the audacity and execution from the characters and cheering along. There’s much amusement to be had from the variety of trick-arrows and their consequence but however ridiculous their eccentricities, bells and whistles, you’ll likely be asking Santa for a bow-and-arrow set for Christmas by the time we’re done.

We get to see some of the backstory to new character Echo/Maya Lopez, currently the erstwhile immediate superior to the hit and miss  ‘Tracksuit Mafia’ and get hints at her earlier life and the way she overcame any disabilities she faced (born deaf and also dealing with an artificial leg). Played as an adult by deaf actor Alaqua Cox, Echo also has the ability – as in the comics – to mimic and learn from movements she sees and we’re introduced to her love of art, words and martial-arts as she uniquely excels at all of them.  But, as with Kate, the trajectory of her life was altered by the loss of a father-figure (apparently at the hands of Ronin) and though Echo appears to be on the wrong side of the law thus far, it’s clear these details make her more sympathetic and are adding a foundation for the proposed spin-off that Marvel has already announced.   There are also some massive hints at the possible and pivotal appearance of an established figure from the comics and the Netflix era of Marvel‘s world-building. In the comics Echo is raised under the wing of  larger-than-life gangland boss Wilson Fisk, aka the Kingpin, who uses Echo against Daredevil by wrongly convincing Echo that the hero killed her father, one of his henchmen. Here Echo’s father – played by Zahn McClarnon – is also killed (inside a workshop with a telling ‘Fat Man Auto Repairs‘ sign) and leaves a bloody handprint on her face as he dies (another nod to the comics’ look) and it’s indicated that today she still works for the man she’s always known as ‘Uncle’. We don’t get to see the face of ‘Uncle’ but even in part-frame he cuts an imposing figure and a short sound of amused laughter sounds VERY MUCH like it comes from Vincent D’onofrio. If this was a small element, it might just be considered just an audio easter-egg, but with the feeling the relationship could be a pillar of the story and character, it wouldn’t surprise anyone if this attention to detail paid off with the actor’s actual return.

Written by Katrina Mathewson and Tanner Bean, directed by female writing/directing team  ‘Bert and Bertie’ and with a great cast and post-production, Echoes really does sell the concept of the show, sets up further complex character dynamics and one only hopes it continues at this level of fun… perhaps showing Marvel‘s strengths can lie on the small screen as well as the multiplex. Perhaps, even… with so many specific Easter-eggs in there… a small-screen West Coast Avengers could happen? 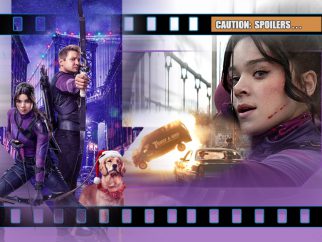 Justice Deferred? Discovery’s Raiders of the Lost Cause…