Justice Deferred? Discovery’s Raiders of the Lost Cause…

As Burnham investigates Dilithium thefts, others are going on journeys of self-discovery to find answers...

The Federation and Star Fleet must work their way through the data that they’ve managed to uncover in the anomaly and put their collective best minds into the mix. But even as Booker and Stamets head to the Vulcan Institute to share their thoughts and information, the Discovery is called away. For some unknown reason, J’Vini, a member of the Vulcan order known as Qowat Milat, (an order known for taking up ‘lost causes’) appears to be hijacking ships and stealing their Dilithium. When the latest incident leaves a captain dead, the apparent threat has been escalated.

Burnham and her mother, Gabrielle (also a member of the Vulcan order), must track J’Vini down and uncover her reasoning. Gabrielle owes J’Vini a great debt and does not want her to be a further casualty, but time is running out to stop her and to find a way that satisfies larger issues of justice and survival…

The latest episode of Discovery, entitled Choose to Live, has a variety of stories it wants to cover, meaning that all of them are served in quick-step fashion rather than any deeper directive, but this still feels very much like old-school Star Trek in subject, tone and execution (albeit with all the VFX and production values the modern era offers).  Diplomatic missions, check. Alien life-forms, check. Slightly moral conundrum, check, quick solution, sure, Sword-fight with the ‘villain’, yup.

While keeping many of their traits, Discovery seems happy to move around its characters into new roles fairly frequently. One minute a character is one thing, then, when needed, assumes a quite different skill-set and responsibilities. As much as Michael has conveniently lost almost all of the ice-cold logic from her up-bringing on Vulcan, Burnham’s mother, Gabrielle (Sonja Sohn), has gone the other way. Snr.’s arrival in the 32nd Century was as a scientist and doctor yet in the time before her daughter and Discovery followed her, the series seen her become a senior member of the Vulcan elite’s Qowat Milat, the blunt, efficient warriors known for taking up lost causes. That fundamental shift (mostly off-camera) always felt like a narrative choice rather than an organic growth.

Though she’s using solid negotiating tactics and keeps her cool, Michael’s solution to the cryogenic problem is vastly underwritten when it comes.  Discovery has a habit of prioritising the emotional over the practical and lo and behold – after the moral quandary is discussed- it largely becomes a case of ‘Hey, If I can fix this machine that you’ve been unable to, even after being next to it for months, will you stop killing people? Cool. Yay – look I flipped this switch and fixed it in five minutes!‘ It’s that ease of solution that somewhat takes away from the lost cause aspect at the centre of the debate. If it that was that easy to fix, where was the real problem? To the episode’s credit it tries to tackle some wider issues –  there’s further questioning of the needs of the many of the needs of the few when it comes to the consequences of J’Vini’s actions. The Federation president notes they must trust the Vulcans to punish J’Vini (Ayesha Mansur Gonsalves), though Michael rightly points out that the murdered starship captain has a wife and family and that justice must be measured in more than just diplomacy and seen to be done.

Elsewhere more use is being made of the show’s virtual wall fx, this time presenting another glorious and impressive 360 degree vista at the Vulcan homeworld’s Institute where Stamets and Booker journey to see if anything can be divined from the data they have. The ability to create these all -encompassing strange new worlds to such a degree is a welcome addition – one that other shows like The Mandalorian have pioneered. In an effort to unearth as much information as possible, Vulcan President T’Rina (Tara Rosling) helps Booker revisit his last memories of his lost planet and ultimately give him some peace. It’s a nice emotional moment that should at least bring the troubled character to a more balanced place.  The other main plot is the transitioning of Gray Tal (Ian Alexander) into a new, artificial body and the ‘will it – won’t it succeed‘ problem. There’s little chance that the show was ever going to kill off a character that gives representation. Again, the gender subtext that the show is aware of and which has made the show popular with people undergoing gender issues of their own. Given the ethereal nature of Tal’s presence, it will be interesting to see what happens with the Tal character now that he’s fully corporeal and will need more character development.

A decent episode of Discovery – not, perhaps, as memorable as it would like to be, but one that efficiently moves various narratives forward with a decent blend of action and walk’n’talks. 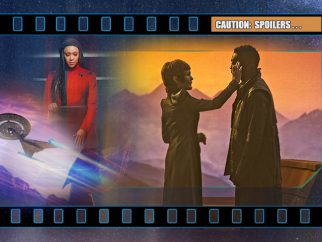 After ‘Home’, animated Spider-man returns to the Spider-verse…