The Discovery crew look for answers and begin to realise the gravity of the force they are facing...

The Federation meets to discuss the threat of the mysterious anomaly, but realise that they won’t be able to take any firm action until they know more. Discovery is sent to gather more critical detail and see if they can work out any rhyme or reason to the anomaly’s path.

The best man for the job may be Booker, but he is still grieving the loss of his entire homeworld. Torn between her personal and professional responsibilities, Burnham needs a friend and a sounding board… so the return of Saru couldn’t come at a better time.

However, how far will the Discovery and her crew need to go to retrieve the necessary data…

The immediate news – outside of this episode – is that Paramount, realising the size of the faux-pas made by pulling Discovery from most of its international outlets days before broadcast, has partially rectified the problem – or given it a band-aid – by allowing the show to be seen on the Pluto platform in some of the regions still without Paramount+. This includes Austria, France, Germany, Italy, Spain, Switzerland and the UK.   Paramount were largely forced into this by the blowback from their original stance and even though many fans will now be able to catch up on what they’ve missed, one suspects that there’s still some dead-eye side-glances from fandom and more ground to be made up in the coming months.

In the cold light of day and the cold vacuum of space, there’s ‘moments’  in Anomaly but not much story momentum here, it’s simply a talk-heavy, data-gathering exercise with bumps – the tensions being generated by the proximity of the danger and fairly easily shown by shakey-camerawork, fires breaking out on the bridge and examples of artificial gravity being lost (which is a fun visual effect, but needlessly used twice).  By the time we’re done the only advancement is that we now know that the Flux (sorry, the gravity-wave anomaly) and its destructive path might not be following any pattern that can be predicted and tracked, but that the Tardis (sorry, Discovery) may have an influence in it direction just by being there (it changed course!)

The flipside of the story is Booker’s PTSD from watching his homeworld destroyed. David Ajala essays a solid soul in torment, still processing the magnitude of his loss and his character functioning on a largely instinctive level that makes him both the best and worst candidate to explore the edges of the anomaly. Though this mainly requires sitting behind a console, the less-is-more performance works and his face and empty stare alone convey  that Booker is right on the edge of an emotional collapse, but determined to get answers – even if it might recklessly cost him his life. Pairing Booker with the usually stoic Stamets (Anthony Rapp) provides the needed counter-balance and banter and it’s interesting that as a result the two have a better understanding of each other, even if we doubt they’ll be hugging any time soon.

As before, Discovery seems to boast impressive VFX (this week’s use of the wall-size digital enhancements are a newly-installed holodeck version of  the new Vulcan/Romulan homeworld Ni’Var  that impressively works flawlessly on a 360 camera-movement. There’s little doubt that the show has invested heavily on the post-production side of things, though the idea of Burnham’s ‘cone of silence’ on the command chair works as an emotive, semi-private moment between her and Booker but also feels like technobabble, a never mentioned before quick-fix from the script so that she can have a private conversation without leaving her post. I think my main problem here is the script.  Drama always has to be heightened a little and disbelief suspended in the moment, particularly in sf, but the moment where Tilly bursts on to the bridge and says “Good news, we know when the next gravitational disturbance is going to hit… the bad news, it’s in two seconds!”  is one of those stupid moments that might work as a singular quip but is just bizarre and even  irresponsible in-story exposition when the stakes are so high and every second counts.  There’s another moment, after Burnham talks of precise-timing needed when she yells “Now!” and Booker hesitates and says “Are you sure?” – hence the moment is inevitably lost.

Sonequa Martin-Green’s Burnham is forced into making some hard choices – providing the weekly furrowed brow and moist-eyes – though she still seems a decidedly iffy choice for the command seat. Far more impressive is Doug Jones, returning Saru to the ship with a new confidence. Jones’ physicality and cadence gives the character a certain nobility and fluid movement all in one go and the decision to refer to this ‘extra’ captain as ‘Mister’ Saru makes him feel like the best choice for a imposing bridge presence since Spock. There are also some sub-plots given a few moments of time – the concept of Ian Alexander’s ethereal Gray Tal getting a physical body (with a nod to Picard continuity) and ‘transitioning’ is an on-the-nose element that speaks to the gender-inclusive aspects in Discovery and Tilly gets some reassurances from Wilson Cruz’s Culber about dealing with stress.

Discovery, as it has for some time, seems a competent sf show for which you’ve likely already made up your mind. It’s not lazy, nor is it cutting-edge but one that seems to encompass the ‘no change, just the illusion of change‘ maxim. More accurately, in the longer term since its debut, it has changed  considerably… but never feels as comfortable as when it hits familiar beats, falling back into the performance and story-pacing rhythms that you already like or not… making it a series you may watch out of habit rather than love. But it’s still too early to tell what this season will bring, so there’s always room for surprises… 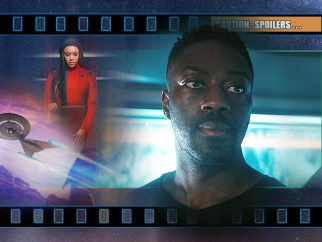