In 2012 the Avengers stopped an alien invasion in New York City – despite their success, there were still many casualties, though Clint Barton (aka Hawkeye) is unaware of the profound impact he had on a young girl’s life, despite not being able to save her father.

Since then, Kate Bishop has kept her family’s fortune at a distance and thrown herself into proving herself worthy, an instinctive go-getter with martial-arts training and archery but a perchance for getting herself into trouble. When she sneaks out of a society ball and starts to keep an eye on her mother’s new beau, Jack, she realises that he’s got more than suspect connections and Kate finds herself in a shady auction-house with questionable merchandise. One of those appears to be the suit and weapon of the missing vigilante known as Ronin.

Across the city Clint Barton is helping his kids by Christmas presents and sitting through his equally uncomfortable memories of battles past…. but his time as Ronin (during the ‘Thanos Snap’) is about to catch up with him as a fleeing Kate comes crashing into his life and makes them both a target for more than one pursuer…

“This season, the best  gifts come with a bow…”

And with that sly marketing, Marvel and Disney+ launch something to keep you smiling all the way to Christmas…

Funny, dramatic, well-choreographed and snarky in turns, Hawkeye is the latest title out of the MCU stables and is a broad-stroke series with a sense of subversive fun but one that can still play with darkness and light along the way. The Netflix / Marvel shows such as Daredevil, Luke Cage, Iron Fist and Jessica Jones largely had to avoid the repercussions of their big-screen cousins and made only the most arms-length, oblique references to events that would surely have otherwise impacted them. Hawkeye goes the opposite route and fully embraces the idea of cause and effect but never lets the baggage get too heavy. There’s countless Marvel Easter-eggs, some overt, some subtle, scattered throughout the first two episodes and which ground the show in the pre-existing MCU but they can work well as window-dressing rather than essentials. They inform when needed but are not so cumbersome that they drag things down thereafter. Yes, before the first ten minutes are up we’ve had death and destruction courtesy of a flashback to the events of Avengers‘ ‘Battle of New York’ leaving piles of rubble and the young Kate Bishop without a father. But it also knows that it doesn’t have to take itself too seriously all the time and can belly-laugh at some of its own flourishes and brushes with fame, often providing the most fun and human moments.

Contemporary Clint has to sit through at least half of a Broadway musical ‘celebrating’ Steve Rogers and that Avengers battle with a song and dance number (and to the tv show’s credit the on-stage show perfectly walks the line with routines that are simultaneously cringe-making and yet somehow perfectly polished – courtesy of composers Marc Shaiman and Scott Whitman  best known for Hairspray, Charlie and the Chocolate Factory and Mary Poppins Returns). Later Clint has to join a group of LARPers (live-action role-players) to retrieve his old Ronin costume  from one of them and though the scenes are played for laughs, there’s clearly some genuine affection in there.  Talked into pretending to fight and lose so that an opportunist LARPer (Grills) can finally have the closest thing to a ‘hero’ moment works well, though Barton’s eye-rolling and muttered aside ‘And I fought Thanos…‘ also hits the sardonic spot.  Together it all sums up the Hawkeye show and the title character: a guy who really doesn’t want to fight anyone unless he has to, but just go home to celebrate Christmas with his loved ones… if only life would let him.

Jeremy Renner has found a certain comfort in an almost everyman character – rugged but slightly crumpled, tired but ever-persistent. The Avengers and appearances in the MCU films may have sky-rocketed his career, but he always seems more at home in the weathered worker-bee roles than tackling monsters.  With two Oscar nominations to his credit ( for 2010’s The Hurt Locker and 2011’s The Town) he was once touted as taking over the lead agent role in the Mission Impossible franchise after 2015’s Rogue Nation but though schedule-conflicts were cited, it seems Renner is better suited at characters with a more grounded quality. Hawkeye take that vibe and runs with it, giving Renner and the audience the best of both worlds.

Hailee Steinfeld caught most people’s attention with the 2010 remake of True Grit and her star has slowly been in the ascendant ever since (with the likes of Pitch Perfect, Bumblebee and Dickinson. She provided the voice of Gwen Stacy in Into the Spider-verse and is currently lending her talents to the role of Vi in the acclaimed Arcane series on Netflix, so November is proving quite the double-whammy. That’s not even mentioning a solid and simultaneous  musical career. Here she breezes through the role of Kate Bishop, giving her an organic mixture of clumsiness and prowess, a rich girl who takes no enjoyment from the family’s fortunes but is driven by the loss of her father and the inspiration of realising that Hawkeye’s skills saved her when she was a child. It’s the kind of template that works well, a character with whom we can identify because she isn’t perfect, she’s just trying.

Kate Bishop muses that Hawkeye’s problem is ‘branding’. There’s some meta-truth at work there. The character has always been a little adrift. Those who are more MCU aficionados than die-hard comic fans may find the shift in Clint’s fortunes for the series a little at odds with his on-screen set-up to date, though its handled well. The comics version has gone through various approaches, but it was the sardonic run by writer Matt Fraction and artist David Aja that most informs the show in tone (even the opening credits and fonts of the show reflect that source material). The comics had Clint as a sometimes down-on-his-luck hero, even a ‘shlub’ bouncing around between semi-celebrity status and still trying to afford basic rent and cope with a sometimes disastrous love-life.  However, on screen we have a Clint as a capable family-man, one of the softer-spoken Avengers that, despite great personal obstacles (the temporary ‘loss’ of his family and the permanent death of Natasha etc) is probably one of the more grounded heroes when it comes to basic priorities. So the show needs to get him out of the pre-established comfort-zone to give him the Fraction/Aja vibe. Clint is still (thankfully!) a happy married guy – he’s just with his kids in New York to buy gifts and see a show when events begin to hijack his holiday plans. This allows Clint to pack the kids off home to their mother and head off independently… and have his world collide with some crazy street-level shenanigans and a troubled debutante who he unknowingly inspired a decade before who’s constantly trying to do the right thing. Voila!

The supporting cast are nothing to be sneezed at either… Vera Farmiga (Up in the Air, Source Code, the Conjuring movies and Bates Motel) essays Kate’s high-society mother Eleanor. Mexican-American actor, Tony Dalton gives us a faux-sincerity, moustache-twirling bad-guy (or at least high-flying, middle-management suspect) who simply can’t be as stupid as his mis-mashed metaphors suggest. Aleks Paunovic (Snowpiercer, Van Helsing) heads up the Tracksuit Mafia and we hope we see more of LARPer Grills, played by Clayton English. And we haven’t even mentioned scene-stealer Pizza Dog (another Aja/Fraction touch).

Whomever decided to release the first two episodes together is at least addressing one of the biggest gripes about the slew of Marvel / Disney+ projects so far. While all of the shows spring from excellent concepts and the potentially rich side-dishes of the MCU screen banquets, it’s often been the case that the over-all pacing of their runs feels off – as if one or two less episodes less or a clipping of running-times would have tightened the plot. All shows deal with the problem to some extent, but when an episode dawdles or seems to lack necessary momentum in a twenty-two episode run, it can be shrugged off… if the ‘season’ is less than ten episodes it’s far more noticeable.   The Hawkeye opener introduces Clint Barton’s status quo and the supporting cast for the show nicely, but the momentum feels ‘off’, as if – however pretty and well-lit it is and however much the dialogue generally works – it’s just taking too a little long to get from scene to scene. Inside the collective ninety-minutes there’s perhaps a leaner, meaner intro that might have worked better… but least in putting out the first two entries together and watching them that way, we get a better and more rounded full introduction than just having the first and thinking ‘Is that it?‘. Hawkeye will only have six episodes, so we’re already a third of the way in, suggesting things will be tighter going forward.

There are already hints of what Hawkeye is setting up for Marvel‘s continued tv presence beyond this six-parter.  The end of the second episode sees the introduction of a new character to the screen. The apparent head of the duo’s pursuers – the so-called Tracksuit Mafia – isn’t given a name nor says a word, but those in the know probably clocked her as ‘Echo‘, another one of Marvel’s army of ninjas first introduced in the pages of Daredevil. (While Matt Murdock was actually a blind lawyer,  Maya Lopez was  born deaf but has the ability to replicate any physical move she sees. Originally trained by the Kingpin who says Daredevil killed her father, she ultimately learns the truth and becomes a hero). Here, played by Alaqua Cox it seems she might still have a ‘villain’ status for the time being, but with news that Echo is getting her own live-action Disney+ series, one suspects a shift as the Hawkeye run goes on (and perhaps Vincent  D’Onofrio reprising the Kingpin – we can hope). Given the references to Clint losing some of his own hearing, a side-effect due to the many battles he’s survived, there’s also a real feeling of passing-the-torch (or bow). The humorous, world-weary tone of the show means there’s little danger of Clint actually being killed off here (though anyone who’s seen Black Widow knows there’s a danger heading his way courtesy of a capable assassin) but it does feel as if Kate’s origin and journey are being set to be further explored while Barton probably gets a graceful semi-retirement of sorts.

Either way, these opening episodes are a fun start, distinct from the other Marvel/Disney+ shows so far but a jigsaw piece that fits right in to that ongoing blueprint and with enough fa-la-la-la-la flavour to keep people watching. 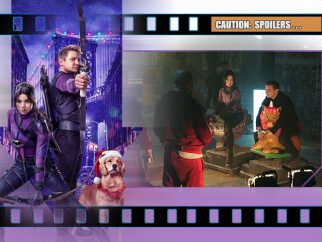