It's the Eve of the Daleks and a new year... but the Doctor may need to keep an eye on minute details...

In an attempt to reboot the problematic interior-scape of the Tardis, the crew are preparing to take a break on a beach, letting the ‘police-box’ handle the refit, but on quickly exiting, the Doctor, Yaz and dan find themselves not on a sandy getaway, but in the basement of a Mancunian storage facility on New Year’s Eve 2021.  The navigational error is the least of their problems when it appears there are other signs of time-travellers in the immediate vicinity.

News goes from bad to worse as the other intruders are revealed to be Daleks and they’ve just killed the only two other humans in the building.

Is there nothing the Doctor and her companions can do before they too are killed?

But perhaps there’s time to change that…

There are some references to the events of the Flux, but really nowhere near enough given the mini-series’ conclusion. The Daleks have apparently NOT been wiped out, but do resent (as you well might) the millions of their kind lost in the recent mini-series and are now instigating a revenge plan.  Yaz notes that the Doctor is still deliberately not talking about important things – but that’s the extent of the dot-joining to the recent story. There’s still no explanation or real mention of the vast chunks of the wider universe that were laid waste by the Flux and for which the Doctor at least bears some responsibility or – given past experiences – surely some survivor guilt. Nope, this New Year’s Day special opens with the Tardis in repair-mode and the Doctor, Yaz and Dan apparently ready to head to a beach for some fun! As with various complaints about Chibnall’s style, that longer-game connective tissue feels weak. It seems like a ‘let’s do something fun and frothier after recent darkness‘ writing decision that actively chooses to ignore the genocide, death and destruction that took place only a week ago for the travellers. That’s totally understandable as a holiday-season entry but it’s also a huge disconnect whichever way you want to play it – giving audiences neither a convenient red-button reset nor a real consequence factor but just letting it hang off-screen with a ‘Let’s not talk about that unpleasantness‘ feel.

That important aspect aside, the only choice is to judge the episode as a singular entry and on its own merits.  Despite its broadcast in the middle of a pandemic there’s nary a mention of COVID which is a welcome respite from continual coverage (though looking back on the entire run so far, that lack of coverage is noticeable). We begin with a Tardis-interior -reset that has some nice visuals and gives a reason for not being able to Vworp away from trouble thereafter (though didn’t the Doctor do a similar reset during Flux?). Eschewing the over-populated, over-reaching mini-series, this couldn’t be more different. In many ways this is the kind of ‘fun’ episode that might have done a lot for the tone of this era if we’d seen more of it earlier. There’s a fast pace, some nice banter, just a couple of very likeable supporting players and a concept that works well as both a short-and-sweet narrative device and on a technical level  COVID-restricted production basis (requiring that limited cast and only a few, repeated sets).

Aisling Bea as Sarah is the episode’s star-player not only offering an acerbic and feisty character but one who is likeable even when being grumpy and frustrated. She resents having to work on New Year’s Eve (again) but is suffering in the not-quiet way that many of us would muster. She’s also the kind of person that quite rightly challenges the stranger who has suddenly appeared, may be responsible for all the chaos and whose immediate efforts don’t appear to be saving anyone. (While it can be fun to watch the Doctor be off-hand and somewhat condescending to officious, bumbling types, the character always works best when there’s someone who still legitimately holds them to account and isn’t a pushover).  Adjani Salmon has some fun with being ‘Nick’, the singular customer who is quietly smitten by Sarah and returns each December 31st under one pretense of another. He’s a little less well drawn as a character and his assortment of ex-girlfriend’s discarded belongings in the storage unit is initially just as bizarre and creepy as Sarah thinks it is… though it’s really just a punchline and affectation of the script.  There’s what amounts to cameo from Father Ted’s Pauline McLynn as Sarah’s mum who insists on calling her before midnight and a never-seen Jeff, a fellow employee who you might think is being set up for a pay-off reveal but it never happens. Nicholas Briggs gives us the voices of the Daleks again and Chibnall’s script slyly allows for one of them to screech “I am not Nick!” (In the final moments there’s also a surprise spectator for the fireworks – though you could eb forgiven for not recognising ‘Karl’ the crane-operator from Whittaker’s first episode).

If you are of the mind to notice, there are certainly some questionable leaps of logic in the mix. The Doctor notes that the ‘window’ of the time-rests is shortening by a minute each time. While it’s true they are noticeably STARTING a minute later each time there’s no reason for anyone to think that they’re finishing at the same point – after all, everyone’s dead by the end of each run.  It could easily be the time-window is simply moving, which would be most people’s first-guess. The Daleks only confirm that shortening factor long after the Doctor has stated it as a fact she can’t know. It also seems remarkably convenient that the time-loop is set for midnight on New Year’s Eve, but that’s perhaps more forgivable on a ‘theme’ level. One also has to presume that the reset each time doesn’t give the Doctor enough time to begin a regeneration, which would surely be the default reaction to being ‘exterminated’? For a hero who is so indignant about the ‘deaths’ of Sarah and Nick and usually pretty smart in the calculations department, the show also plays fast and loose with how the resets rules work. Does someone come back if the reset begins again from a moment after they were killed in the previous run? Sarah notes the problem but only minutes later it seems to be contradicted.

Doctor Who, being a series about an alien that can change their form and who travels around a universe that – completely understandably – isn’t governed by Earthly views of gender etc, has always been an obvious port of call for tolerance and diversity and during the post-2005 era of the show, its show-runners have embraced that aspect more directly. But on the flipside, the idea of fellow-travellers falling in love with the Doctor now seems like a recurring trope rather than a story-thread.  Rose Tyler, Martha Jones, the strong flirtation with Amy Pond have all played that aspect out in various ways. That’s not to say strong emotional bonds shouldn’t or wouldn’t occur with someone with whom you’ve spent a lot of time (and often involving life-or-death situations) but the circle-of-strife never ends well. For me the bittersweet story-arc of ‘just-mates’ Donna Noble is a highlight and if Clara Oswald had left a season earlier than she did (as originally planned) it would have been the most stylish and honest companions (and exits) of the modern era.  Yes, there’s been a demographic that has strongly pushed for a Yaz-Doctor relationship, but at least in my experience they haven’t been an overwhelming majority and the idea seems to speak more to the well-intentioned aspect of on-screen representation than it being an organic story-arc. (It somewhat negates that two women can have a bond without it being inevitably sexual). owever, here we go with a last-minute reveal.  Portrayed well and with consideration I have no problem with the idea in principle, but there’s been little groundwork and it would seem so far that the Doctor – so often blind to the more subtle aspects of human-interaction – really hasn’t even considered that sharper-defined possibility. Unlike the ‘duo’ aspect of previous modern incarnations, there’s long been the ‘Fam’ unit and despite the odd ambiguous line or joke along the way, there were no mutual simmering, shared lingering gazes and unspoken chemistry that burns up the screen (at least of any note) suggesting star-crossed lovers as they cross the stars. A strong sisterly bond with the Doctor would seem the far more organic and refreshing way to go given the stories to date, but we’ll see how it plays out (especially bearing in mind that there’s only two hours of screen-time left in this era and it looks like Mandip Gill and John Bishop will be leaving the series after those next two specials).

Director Annetta Laufer gives us a fun enough, diverting entry and one that I wish had featured far earlier in this run. No, Eve of the Daleks doesn’t push any boundaries, but it plays to some brief and breezy series strengths, lightens the tone and speeds the plough as we head into a year of change. 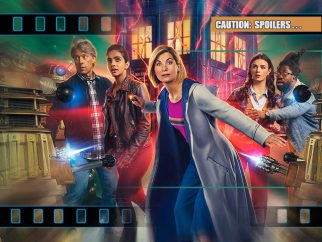 Yung and the Restless: ‘Cleaning Lady’ is crime without the grime…