Yung and the Restless: ‘Cleaning Lady’ is crime without the grime…

Pilot Review: Luminol and Lipstick as FOX's glossy drama provides the other side of Vegas' forensic foibles...

Thony De La Rosa is a respected doctor from Manila who has found herself in a very different and less than ideal environment as an immigrant who has outstayed her visa and now works menial jobs in and around Las Vegas. She left her old life and husband behind for what she hoped would be a limited time as she seeks treatment for her son, Luca, who has a severe bone-marrow deficiency. But when a donor pulled out, Thony has tried everything to stay in the area, further fund her application and make ends meet until the situation improves.

One of her jobs is cleaning up after others – whether they be the parties in nearby casino complexes or the more shady businesses that lie off The Strip. It’s in the latter where her life is about to change again. Witnessing the killing of a compromised ‘fight club’ organiser by the son of a local gangland boss, it seems her days are numbered. But Thony knows her own skill-set and promises she can clear up the crime-scene so it looks like no-one was ever there. Intrigued, local enforcer Arman goes against the wishes of the petulant shooter and agrees that he’ll let her live if she proves her worth, which she does.

Now Thony is caught in a morally dubious situation.  Arman’s shadowy connections could smooth the way into Luca getting back on a transplant list, but only if Thony stays in his service. Meanwhile Arman must avoid the more extreme wishes of his more ruthless boss and Thony must contend with an FBI team who think they may have found a new way in…

Much of the marketing for The Cleaning Lady has talked about ‘introducing‘ Elodie Yung which is a little strange as she’s already had a significant presence as Elektra Natchios in Netflix’ Daredevil series and was effectively the female lead in the first The Hitman’s Bodyguard  (inexplicably absent from the sequel, but perhaps dodging a bullet).  But this is her first network series and she certainly makes an impression. The actor, of French-Cambodian descent plays the role of Thony well, holding the screen throughout, but the series works just a little too hard (or maybe not enough) to give Yung’s Thony a likeable personality – one that is pragmatic but completely audience-embracing. She’s blueprinted to be sympathised with and liked even when making questionable decisions. Yung’s fighting skills in Daredevil are nowhere to be seen in The Cleaning Lady pilot, but she still has the same screen presence, able to convincingly stand-up to those who would casually cast her aside or underestimate her. It may not be convincing that her life is ultimately spared when she’s compromised during a job, but we can see she will never to be cowed by others. She will always do anything to ensure the safety of her child. That means she’ll reason for her life, but she won’t beg for it – and that will be a moral line worth the scrutiny.

Adan Canto smolders at the camera as Armani-clad Arman Morales and looks the part but doesn’t have the requisite sense of dangerous menace needed for a person in his position. His decision to spare Thony might be an instinctive indulgence on his part, but there’s very little in the opener that convinces that he also would risk his own life to save this relative stranger who could also be his downfall. She’s useful and she’s exotic so it’s clear why his interest is piqued, but that intrigue should be a red-light for a person whose role is to take care of problems rather than indulge them. In fact, watching things play out, the only immediate rationale for his behaviour in working so hard to keep her alive is that he’s an undercover officer or agent determined not have anyone else die on his watch – which would have been a nice dynamic to play, but that seems unlikely by the time the credits roll.

Based on the Argentine series La Chica Que Limpia– which ran from 2017-2018 – FOX‘s new drama is both stylish and promising.  However there’s a feeling throughout the episode that this is the kind of story that would have thrived and evolved as an edgier cable show but now feels somewhat confined by the restrictions of a primetime network title and the colouring-inside-the-lines expectations that brings. There’s a checklist of factors here: undocumented immigrant, sick child, sassy sisters and a side to Vegas that talk a lot about its seediness but somehow always looks glossy. More than just a metaphor, some of the necessary down-and-dirty that would have organically come from the (literally) bloody job of cleaning up after gangland activity is absent, some of the morally-questionable aspects are stream-lined into photogenic set-pieces and the pacing artificially smoothed over.  It’s all watchable but it’s that inherent short-hand of network shows that sometimes stands out here. In one sequence Morales is told by his gangland boss that a crime-scene is going to be destroyed by a bomb and so he then races back from the desert to save Thony from being blown-up, making the save by mere seconds – but the entire screen-time of that dilemma lasts barely a minute, never really generating the needed tension. It’s a sign that despite the fertile and potentially morally-complicated territory, this is going to be more 24 and CSI than Dexter or Breaking Bad.

The pilot is good enough to keep audiences watching through primetime and there’s enough talent onboard to make it interesting –  though whether it can last longer than its source material and triumph over some of the more pseudo-soapy elements that strut their way through the glitter, will depend on pace as well as polish… 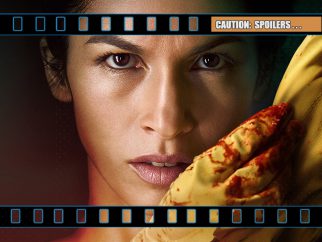